Following up briefly on last week's post about high pressure over the Bering Sea, here are maps showing the sea-level pressure and temperature anomalies for November in the 8 analog years I identified.  A couple of the years (1988 and 1999) don't show much of a ridge at all for the full month of November, but the others have more similarity in the pressure patterns.

It's interesting to note the wide variety of temperature patterns in the analog years, and especially for the western and northern parts of the state.  Whether or not cold air prevails near and to the east of the ridge axis depends on the orientation of the ridge and the pressure gradient to its north; it is not uncommon for plentiful warm air to be swept over the ridge by a fast westerly flow.  This month has certainly been an example of strong westerly and southwesterly flow bringing warmth to the west and north - see the MSLP and temperature maps below.

Now take a look at the MSLP and temperature maps for January of the analog years (i.e. two months later): 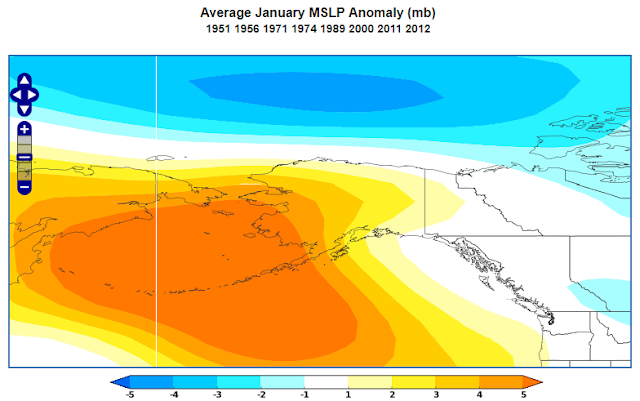 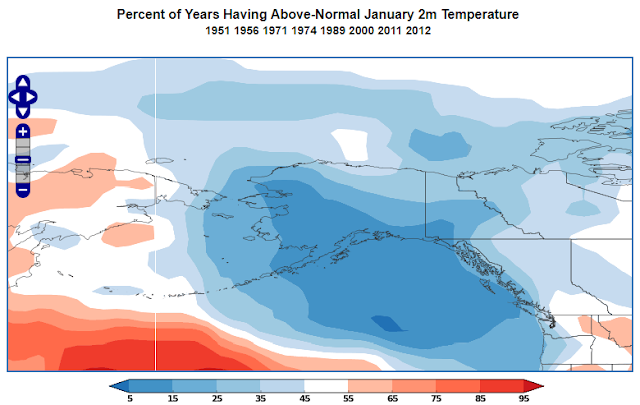 In contrast to November, low pressure to the northeast of the ridge (rather than the northwest) allows a more northerly component to the flow east of the ridge, and consequently there is a notable cold signal across western and southern Alaska.