The past couple of days have seen an interesting example of the winter-time effect of clouds on temperatures in Fairbanks.  With the noon sun now less than 5° above the horizon, solar heating is very small and there is a more-or-less permanent inversion of temperature near the surface.  When clouds are present, the infrared radiation they emit provides a warming influence, especially when the clouds are thick.  However, when clouds are thin, high, broken, or absent, then radiation from above is reduced, and surface temperatures can drop - sometimes dramatically.

The chart below shows the ups and downs of temperature in the past three days at Fairbanks airport, and the gray squares show the amount of cloud cover as reported by the ASOS; the cloud cover scale is on the right.  I've also added a darker gray shade to denote hours when snow was falling, indicating that the clouds were relatively thick; the light gray squares indicate cloud with no snowfall. 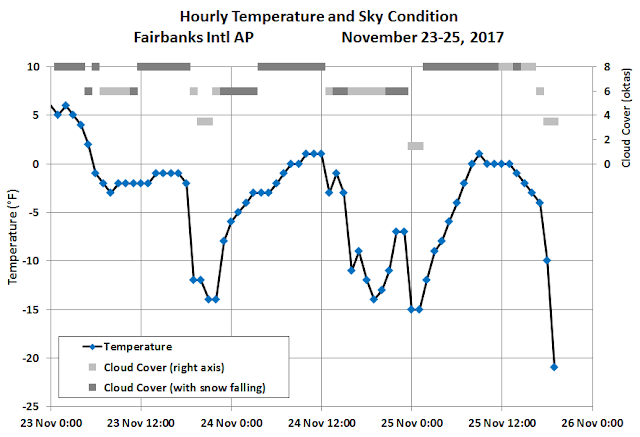 Note the rapid drop in temperature on Thursday afternoon (Nov 23) when snow ended and breaks appeared in the clouds; but then the temperature began a steady climb back up to around 0°F as clouds thickened and snow occurred again on Thursday night and Friday morning.

A similar evolution then happened yesterday afternoon/evening, with thinning and breaking cloud allowing the temperature to drop back to -15°F, but then again snow and clouds pulled the temperature back up to 0°F by mid-morning today.  Until this morning winds were calm or light throughout this period, so the temperature changes were not related to changes of air mass.

And for a third time, and even more dramatically, dissipating clouds have once again allowed the temperature to drop very sharply in the past couple of hours.  It's a simple energy balance: the surface loses heat by upward radiation at a fairly constant rate, and as soon as the return flow of energy diminishes as clouds disappear, the temperature responds.  Without the beneficent presence of clouds, the cold of interior Alaska's winter would be much, much more severe.