I mentioned the other day that there has been a persistent ridge of high pressure over the Bering Sea in recent weeks, and I suggested that this is probably related to the current La Niña episode.  Here's the circumstantial evidence for this idea: first, note the sea-level pressure anomaly for November 1-20, showing a very strong departure from normal over the southeast Bering Sea and the eastern Aleutians.

Compare this to the mean November pressure anomaly in the 10 strongest previous La Niña episodes since 1950, based on November-March mean values of the Multivariate ENSO Index (see below).  The resemblance is, to say the least, very good; even the low pressure anomalies to the southeast and to the northwest line up.  It could just be coincidence, of course, but I think it's probably safe to conclude that La Niña is already having a significant effect on the circulation pattern near Alaska. 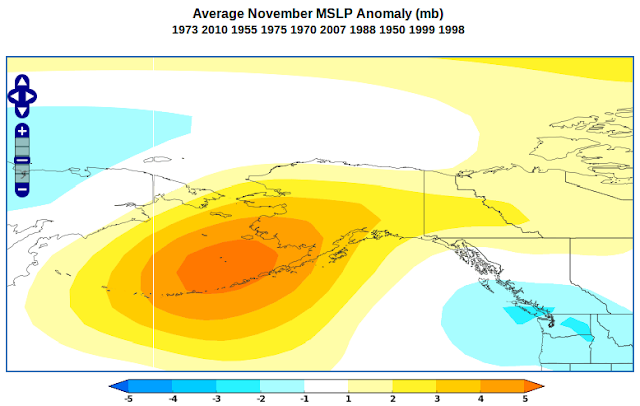 Here's a simple animation of recent 500mb heights.  It might seem counter-intuitive that the west coast would be so stormy with a strong ridge nearby, but in fact there has been a very active jet stream over the top of the ridge, and frequent strong disturbances have moved around the northern periphery of the ridge.  Another way of looking at it is that the storm track has been displaced north of its usual position.  Moreover, the actual height pattern has been highly variable, as seen in the animation; the anomaly in the maps above says nothing about the stability or variance of the flow pattern.

In view of the excellent agreement with the typical "strong La Niña pattern", it's interesting to note that the current La Niña's intensity is still rather modest; it certainly doesn't yet count as a strong episode by standard metrics.  A map of the last month's SST anomaly (see below) shows a band of cool water along the equator east of the dateline, but it's a narrow band and the anomalies are, again, modest.  Nevertheless, the spatial presentation of the cool anomalies resembles a classical La Niña (cool near South America), and perhaps we could argue that this episode is behaving more like a strong episode because of the strong temperature contrast between the cool equator and the widespread warmth outside the tropics - in other words, it's a strong La Niña when you consider how warm the globe is now.

Back in September we looked at the implications of La Niña for Alaska's climate over the entire winter season - November through March.  But given what we've seen so far, is there anything new we can say about how the rest of the season might evolve?

I decided to look at this by examining the winter climate patterns in La Niña years when a Bering Sea ridge prevailed in early-mid November - and also in other La Niña years when it didn't.  Despite the very good pattern match in the two maps above, there is certainly no guarantee of seeing this pattern during La Niña, and indeed the connection is much less robust when less intense La Niña episodes (like the present one) are included.

So to match the recent anomaly, I calculated the area-average 500mb height for November 1-20 over the region 40-60°N and 170°E-160°W, and after removing the long-term trend I obtained the Nov 1-20 height anomaly for the 16 strongest La Niña winters.  Of these, it just so happens that 8 years had above-normal Nov 1-20 heights (like this year), and the other 8 had below-normal Nov 1-20 heights.

Looking at the subsequent December-February climate patterns, it's no surprise to see that the November-ridging years tend to see the ridge persist, although its focus shifts south of the Aleutians (top map below).  In La Niña winters without a Bering Sea ridge in November, the MSLP pattern is similar but less pronounced (second map below). 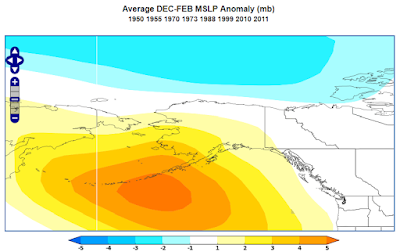 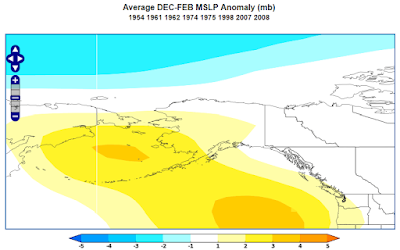 The Dec-Feb temperature patterns are quite similar to each other; November-ridging years tend to see more widespread cold from the west coast to southeast Alaska, but the eastern interior seems to have a better chance at cold in the other La Niña winters. 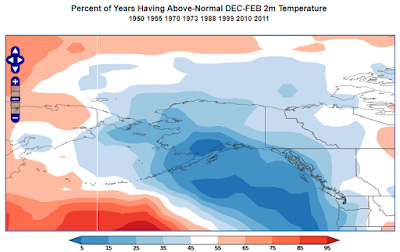 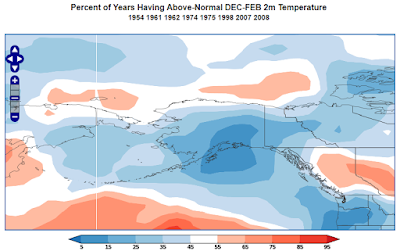 A more interesting difference, perhaps, shows up in the precipitation maps (see below).  Years like this one, with November ridging over the Bering Sea, have a high frequency of above-normal Dec-Feb precipitation over western, northern, and central Alaska, and this certainly seems consistent with the recent stormy pattern along the west coast.  In contrast there is not much of a precipitation signal for western or interior Alaska in La Niña winters that fail to produce a Bering Sea ridge in November. 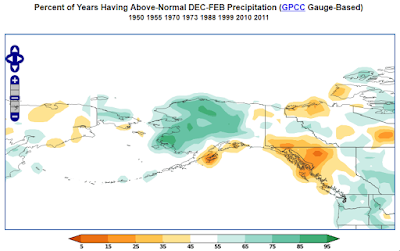 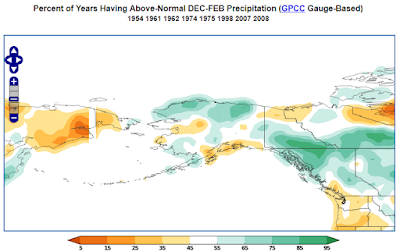 Finally, what can we say about sub-seasonal variations during winter?  Interestingly the strongest signal for cold (i.e. colder than normal) shows up in January for the November-ridging years.  The first chart below shows the daily temperature anomalies in Fairbanks for the same 8 years with La Niña and a November Bering Sea ridge.  Mid-late January really stands out as having an enhanced frequency of cold, with the lone exception being January 2000 (when it was in fact cold until mid-month).  A second round of cold occurred relatively frequently in early March in these "analog" years.  Of course these signals could just reflect random variability, but I don't think it's unreasonable to expect the sub-seasonal evolution to be at least somewhat predictable in view of the La Niña forcing combined with a distinct and anomalous pattern in November. 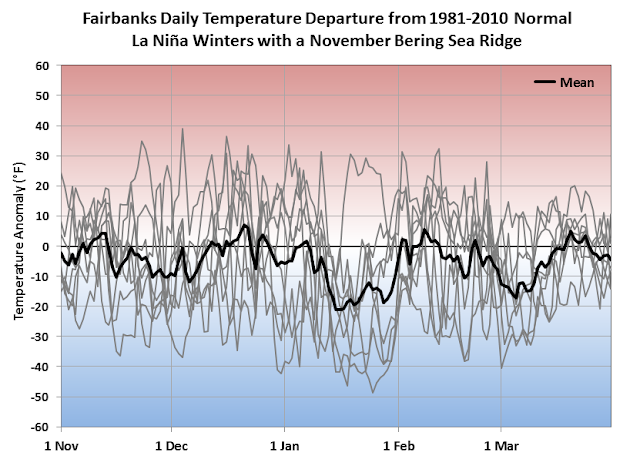 In the 8 years without a November ridge, the Fairbanks temperature patterns were - interestingly - nearly inverse, with more frequent warmth in mid-January and relatively cold conditions around the turn of the year and in early February.  If my expectation proves correct, then this winter is more likely to follow the first trajectory (cold in January) than the second; let's see how it plays out. 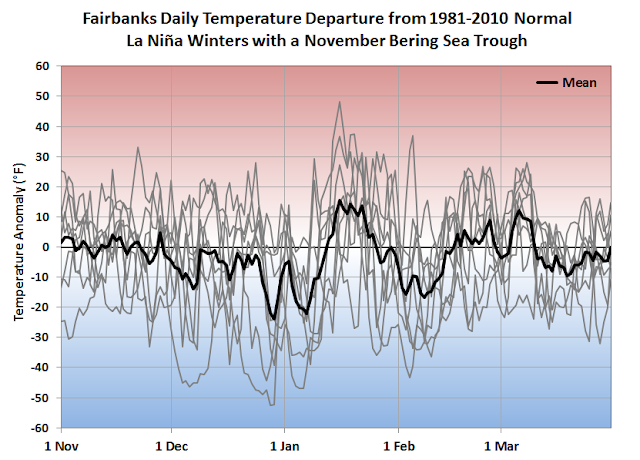