Barrow observed a maximum temperature of 57 °F yesterday, which is almost the highest temperature of the year so far; the highest was 58 °F on July 16.  It has been 45 years since Barrow recorded a summer without reaching 60 °F, so it would be quite noteworthy if it happens this year.  Barrow also exceeded 50 °F for each of the past three days, which is the first time they have been able to string together two or more days above 50°.

The relative warmth in Barrow led me to wonder when the warming effect of reduced sea ice typically shows up on the calendar in Barrow.  As we all know, Arctic sea ice has been much below normal in recent years and is well below-normal again this year (see chart below), despite earlier model forecasts of increased ice (as we've discussed before).  The lack of autumn sea ice in the Arctic waters near Barrow has caused pronounced autumn warming in Barrow in recent years.  The second chart below shows that September and November temperatures in Barrow have been higher than the long-term mean in just about every year since 1997, and the October mean temperatures have been tremendously elevated since 2002.  In previous posts Rick has pointed out the collapse of the inter-annual variance of the October temperatures at Barrow, and of course this is directly attributable to the huge loss of sea ice; the open water in October simply prevents any seriously cold air from settling in over Barrow. 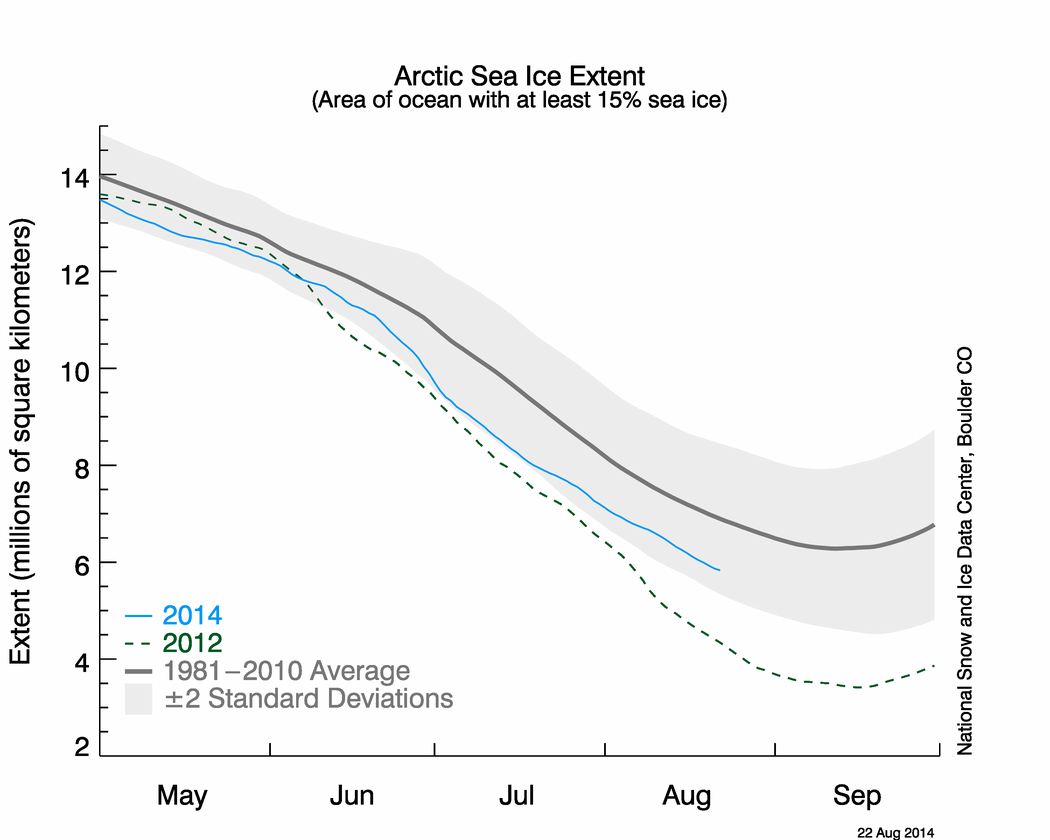 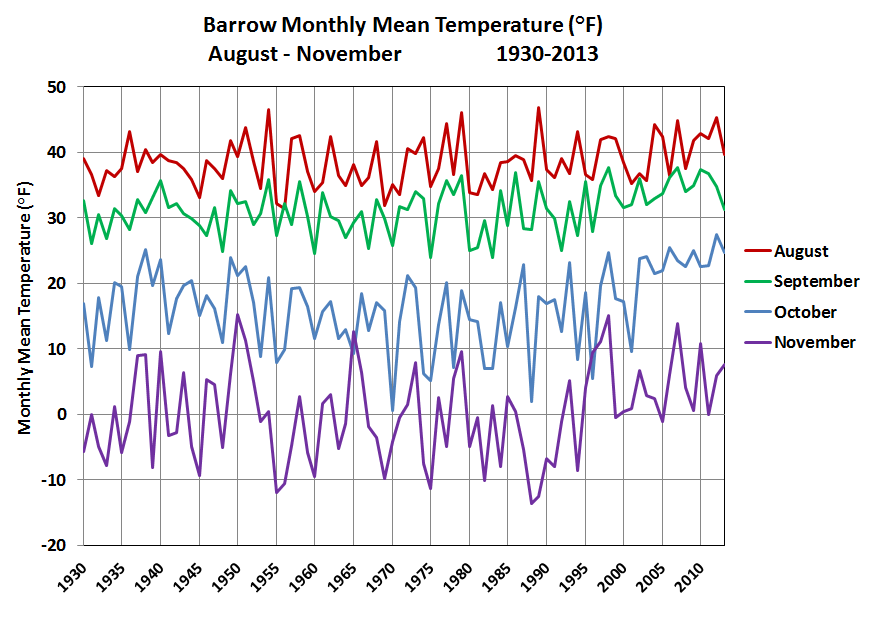 A more precise look at the seasonal timing of the recent warming can be found by looking at the mean daily temperature anomalies at Barrow since 2002; the dark blue line in the chart below shows that warming at Barrow relative to the 1981-2010 normal is maximized in the second half of October and starts to diminish at the beginning of November.  Note that I applied a +/- 15 day smoothing to the 2002-2013 mean anomalies to remove some of the sampling variability; the unsmoothed daily mean anomaly from 2002-2013 actually peaks at +11.1 °F on October 28.  The chart also shows the same data for several other coastal Arctic stations, from Kotzebue around to Deadhorse; the other stations show very similar patterns, with pronounced recent warming in October, although the timing of the peak is a little earlier at Kivalina and Kotzebue in the northwest. The following two charts show that, interestingly, a similar October peak in recent warming is found at both Fairbanks-area stations and a collection of various other Alaska stations north of 64 °N.  I am a little surprised by this, because I would not necessarily expect the pronounced warming effect from the sea ice reduction to extend so far to the south.  However, the very similar timing of the peak warming at all the stations seems quite suggestive of being caused by the same phenomenon throughout, and there is very high confidence that the sea ice reduction is indeed the cause of the October warming on the North Slope.  The only other possibility I can see is that the weather pattern has coincidentally (and strongly) favored southerly flow and warmer conditions in mid-late October on average in the past 11 years.  A little more investigation will be required to rule out this possibility. 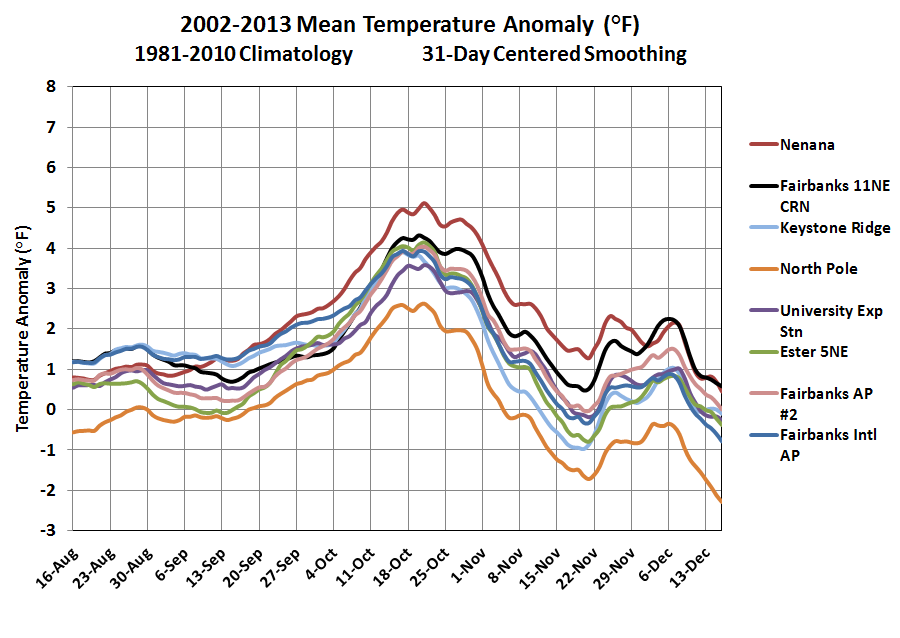 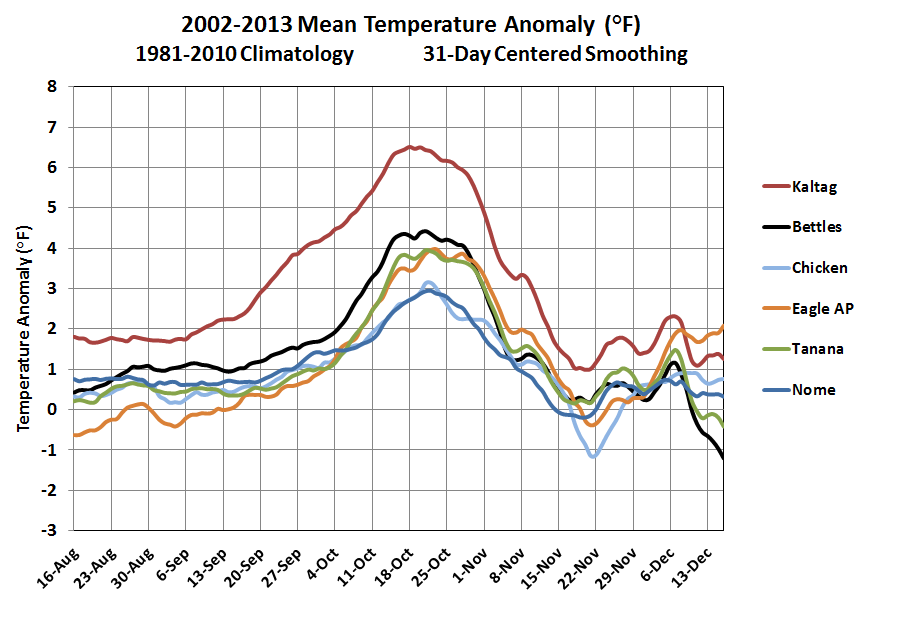 Posted by Richard James at 5:28 PM