The recent heat wave and 20 hours of daily sunshine may have banished thoughts of winter for the time being in interior Alaska, but is it possible that a freeze could yet occur before high summer arrives?  Medium-range forecasts have been suggesting that a significant cool-down may occur next week, so this is an interesting question.

From a long-term climatological standpoint, the official Fairbanks climate station (the airport) is well past its average date of last freeze (32°F or lower), which is May 17 (May 14 from 1981-present).  Keystone Ridge also typically sees its last freeze on May 17 (18 years of data).  However, for other interior locations the average last freeze date is later: May 20 for McGrath, May 24 for Bettles, May 28 for North Pole, and May 31 for Eagle.  Historically speaking, a freeze at any of these locations is not outside the realm of possibility at this date; for example, Fairbanks airport saw 29°F on June 4, 2006, and 32°F on May 30, 2008.

It's interesting to consider the highest temperatures that have occurred prior to the last freeze: Fairbanks has already reached 86°F this year, and Eagle 91°F.  Would a freeze after such heat be unprecedented?  The answer is no.  In 1947, Fairbanks reached 90°F on May 28 and then promptly dropped to 31°F on June 1.  Similarly, after the great May 1995 heat wave (88°F on May 11), 32°F was reached on May 15 and then 28°F on May 22.  This may not be all that surprising if we consider that extreme early heat is caused by a highly amplified upper-level flow pattern, and the same amplification could - under the right circumstances - bring an unusually cold airmass to the same region within the subsequent week or two.  It will be interesting to see if the same thing might happen this year. 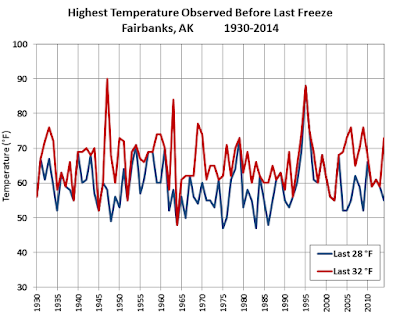 As an aside, I noted that 850 mb temperatures typically have to drop several degrees below freezing in order to get a surface freeze at this late date.  Looking at all freezes after May 26 in Fairbanks, the minimum 850 mb temperature ranged from -1°C to -9°C.  This gives us a ballpark range for what to look for in the 850 mb temperature forecasts in coming days (although of course these chilly temperatures aloft are no guarantee of a freeze at the surface, e.g. we also need clear skies and calm winds).  To access raw NWS computer forecasts, go to the following URL and click on "NPAC" and "GFS", then e.g. "850_temp_ht" and select a forecast hour.