The charts below show the CFSv2 model forecasts as of May 6, from 1982 to present, for June-July mean temperature at the grid point closest to Fairbanks.  Note that the forecasts prior to 2010 were made in retrospective mode, using the historical oceanic and atmospheric reanalyses as starting points for the forecasts.  The forecasts since 2010 were actual operational forecasts, but created in essentially the same manner as the retrospective forecasts.  Also, for those interested in technical details, I have averaged together the 4 ensemble members from May 6 with another 4 members from May 1, to obtain a better sampling of the forecast uncertainty.  The retrospective forecasts were run once every 5 days from 1982-2009. 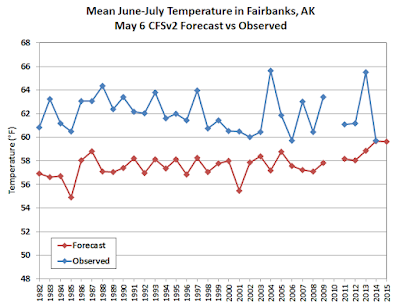 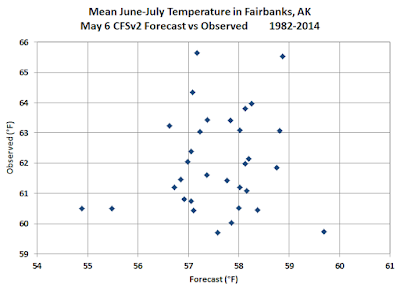 The scatterplot reveals the sad reality that there is essentially no skill in the early-May CFSv2 forecasts for the June-July average temperature in Fairbanks.  This year's May 6th forecast for June-July 2015 showed significantly above-normal temperatures, but the historical track record of the model gives us no confidence that this outcome will occur.

As an aside, it's interesting to note the apparent difference in long-term trends between the forecast and observed temperatures in Fairbanks, evident in the first chart above.  Observed June-July temperatures actually show a slight cooling trend since 1982, but the forecasts show a warming trend.  This is an interesting problem with seasonal forecast models and the interpretation of their forecasts: the models are tuned to generally reproduce the global average trend in temperature, but the regional model trends can be quite different from reality, and it's not clear (to me) if this is something that warrants an empirical adjustment to the forecasts.

While I'm on the topic, it is worth looking also at the CFSv2 rainfall forecasts for the June-July period in Fairbanks.  Surprisingly the forecasts appear to possess a certain amount of skill - see below.  Usually precipitation is thought of as more difficult to predict than temperature, but this is a clear exception to the rule; the 1982-2014 rank correlation is 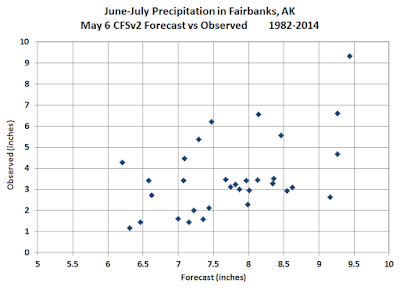 For those who may be interested, the following charts show the temperature forecasts for June-July in Anchorage and Barrow respectively.  There is a miniscule amount of skill in the Anchorage forecasts, but none for Barrow.  I also looked at the precipitation forecasts for these locations, and there is no skill at all.  Obviously, seasonal forecasting has a long way to go - but of course we're only looking at one model for one time of year, whereas seasonal forecasters always look at an ensemble of models and pay close attention to statistical indicators of seasonal trends (PDO, ENSO, etc). 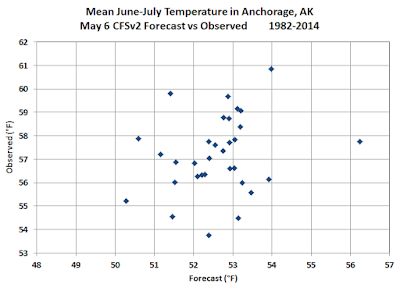 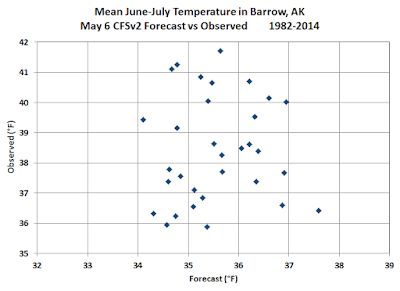