In the course of some casual investigation into temperature transport patterns over Alaska (e.g. frequency of chinook flows), I created a couple of graphics that may be of interest to a few in this audience.  I certainly found the material to be revealing; but I'll caution that the discussion pertains to temperatures aloft in the free atmosphere, so it doesn't speak directly to surface-level climate.  You might think of this as something of an academic exercise.

By way of introduction, I'll show first the February 1 and August 1 climatological normal temperatures at 850 mb (about 4500' above sea level): 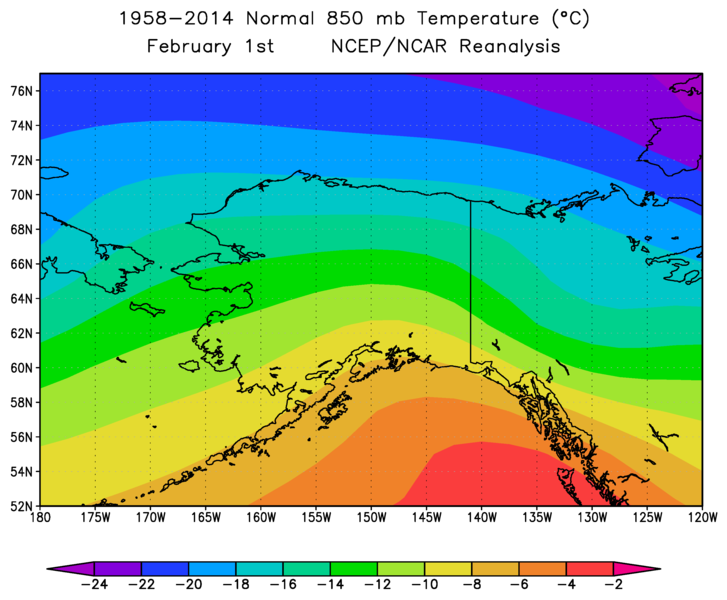 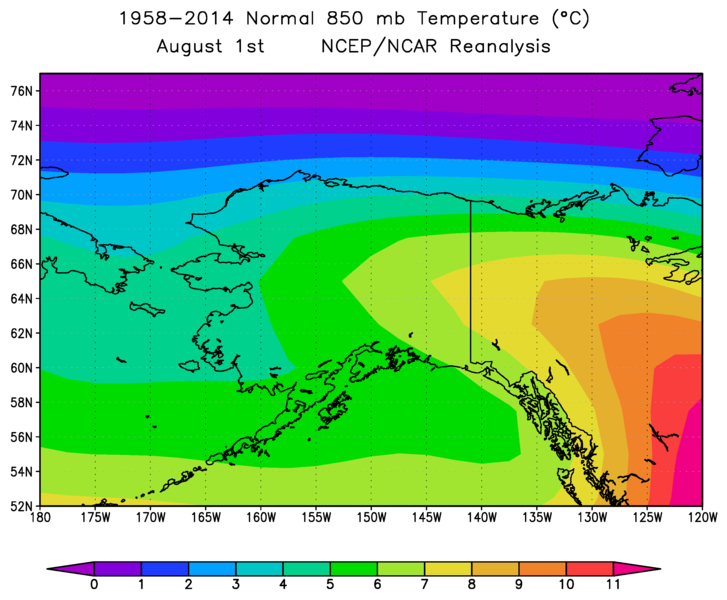 These patterns are very familiar of course: a strong north-south gradient in winter, with relatively warm temperatures over the eastern Gulf of Alaska in association with the favored ridge position; and an axis of warmth in summer stretching from the North American interior across northwest Canada to interior Alaska, while cooler temperatures prevail to the south owing to the maritime influence.

Now consider the patterns that are evident in time-distance cross-sections (Hovmöller diagrams) constructed along latitude and longitude lines through Fairbanks - see below.  The first figure shows the seasonal evolution of the normal 850 mb temperature by longitude along the 65th parallel, i.e. along the east-west line approximately through Fairbanks.  In agreement with the first map above, we see that interior Alaska is warmer aloft in winter than locations both to the west and to the east, again because of the tendency for warm air to be imported aloft by the mean ridge/trough structure.  Fairbanks maintains this advantage in the spring and early summer, as the 0°C normal reaches Fairbanks earlier than points to the west and to the east.  However, by late summer it is warmer aloft over northwestern Canada, as seen in the August 1 map above; but very rapid cooling over Canada in autumn and especially late autumn restores the wintertime maximum in temperature over interior Alaska. 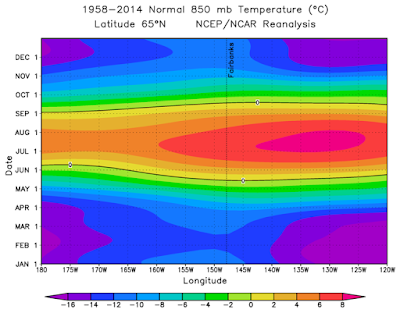 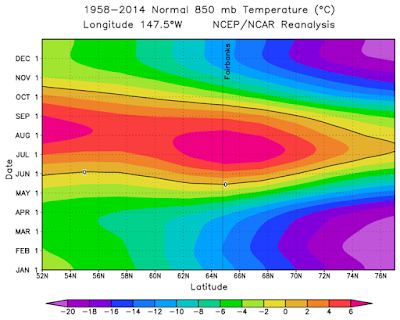 Looking at the north-south cross-section along 147.5°W, which is near the longitude of Fairbanks, we see the intense north-south temperature gradient in winter across Alaska, but in summer there is a temperature maximum over the interior.

Another interesting feature is that the annual cycle in mean temperatures aloft becomes much larger as you go north across Alaska; the summer temperatures at 850 mb are nearly as high on the north slope as in the interior, but winters are much colder.  The annual temperature cycles are very different at the surface, of course, but it's interesting to see how little the 850 mb regime resembles a maritime environment over the Arctic Ocean north of Alaska.

Finally I'll highlight the large lag in seasonal changes over southern Alaska compared to the interior; this reflects the maritime/continental climate difference.  Interestingly the peak rate of "spring" warming does not occur until June in the south, but at 70°N it occurs in late April.

The graphics below illustrate the climatological normal rate of temperature change for the same two cross-sections through Fairbanks: 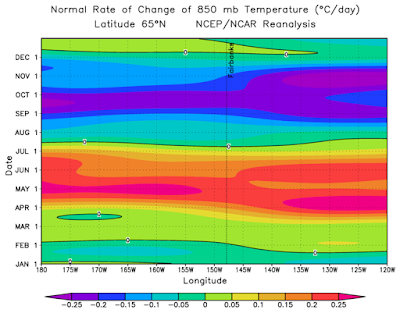 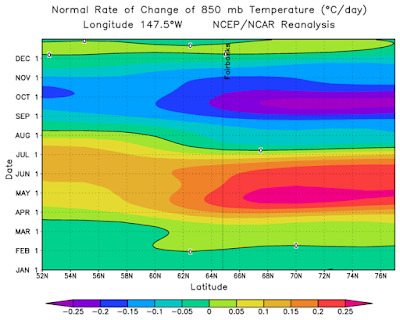 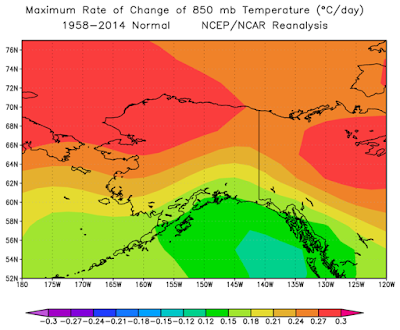 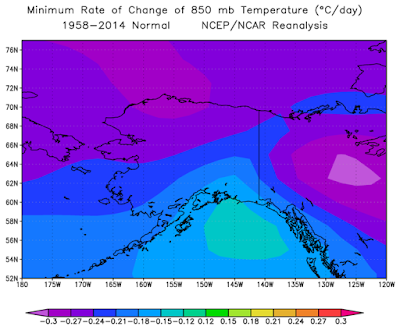 Posted by Richard James at 6:48 AM