The COOP station in Eagle reported 86 °F for a daily maximum temperature yesterday.  This is a new record, by a margin of 1°F, for the hottest on record for so early in the season at Eagle; the previous earliest date with a temperature of 86+ was May 27 (1947).  However, the 1995 heat wave, which I mentioned the other day, was arguably more impressive as it brought 85 °F to Eagle more than a week earlier, on May 11.  Other than the 1995 event, yesterday's heat in Eagle appears to be the earliest on record for such a high temperature anywhere in Alaska.

The diurnal range of temperature in Eagle has been extreme in recent days, exceeding 50 °F at the airport where overnight minima are usually cooler.  While extreme intraday temperature variations are not too unusual in winter (especially late winter) with snow on the ground, it is rare to see such a large diurnal variation without snow cover.  The chart below shows the hourly temperature and relative humidity observations from the past 10 days; the relative humidity reached as low as 8% yesterday afternoon (temperature 84°F, dewpoint 16°F). 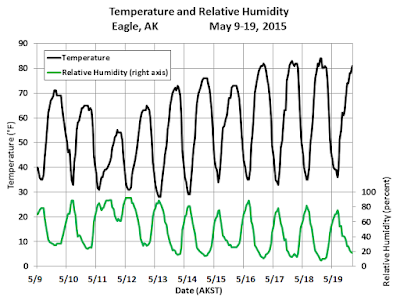