Record-breaking heat has continued to bake the eastern interior, as Eagle set an all-time record for the month of May yesterday: 88 °F at the COOP site.  This is not far off the Alaska May high temperature record of 92 °F; and according to my data, no higher temperature has ever been observed this early in the season (88 °F was observed in Fairbanks on May 11, 1995).

Other aspects of this heatwave that seem notable include:

- The latest 7-day period averaged 60.9 °F at the Eagle COOP (average of the high and low temperatures); this is the warmest week on record so early in the season.

- The diurnal range reached an astonishing 53 °F at Eagle airport yesterday (low of 34, high of 87).  The 7-day average diurnal range of 48.1 °F is the largest on record for any week not in March or April.

- Eagle airport reported 6 consecutive days with a high in the 80s and low in the 30s.  This is unprecedented for any time of year: the previous record was 4 consecutive days, and only 2 outside of August.

The chart below shows that Eagle has seen an abundance of 80-plus degree days in May in recent years: 20 such days (including today) were observed from 2010-present, compared to a total of 21 days in the preceding 63 years.  (But note that I required no more than 1 missing day in May for the total to be counted, so several early years are considered to be missing.) 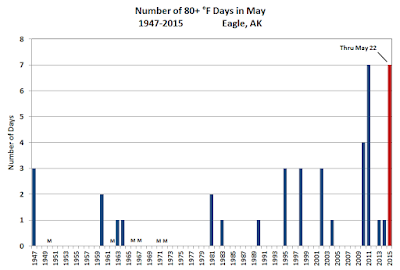 Update May 24 5pm AKDT: the COOP site in Eagle reported 91 °F for a high temperature yesterday, May 23.  This appears to be the hottest on record for anywhere in the state this early in the season.  Needless to say, the past week in Eagle has been exceptionally hot and would be unusual for the height of summer: most years do not have a week this warm in terms of daily maximum temperatures.