One of the highlights of last month's weather in Alaska was the reported extreme wind chill from the Howard Pass RAWS in the western Brooks Range; the event was discussed at some length on this blog.  I presented a cursory look at two relatively high-resolution model forecasts of the event, which showed very low wind chill but did not reflect wind speeds as high as reported from the RAWS anemometer (up to 91 mph sustained).  We speculated that if the extreme wind speeds really occurred, then higher resolution modeling might be required to capture the local flow processes.  Prompted by this notion, I recently ran the WRF model over a limited domain at higher resolution

To obtain a high resolution simulation without requiring prohibitive computing resources, I used a traditional nesting technique to embed progressively higher resolution domains within larger coarse-resolution domains.  The figure below shows the three smallest simulation domains at 9 km (white), 3 km (blue), and 1 km (red) grid spacing; an outer domain at 27 km grid spacing was also used, with initial and boundary conditions from the GFS model.  The location of Howard Pass is indicated with a white dot.  I performed the simulation on an Amazon cloud virtual machine, which is available at a relatively low hourly cost. 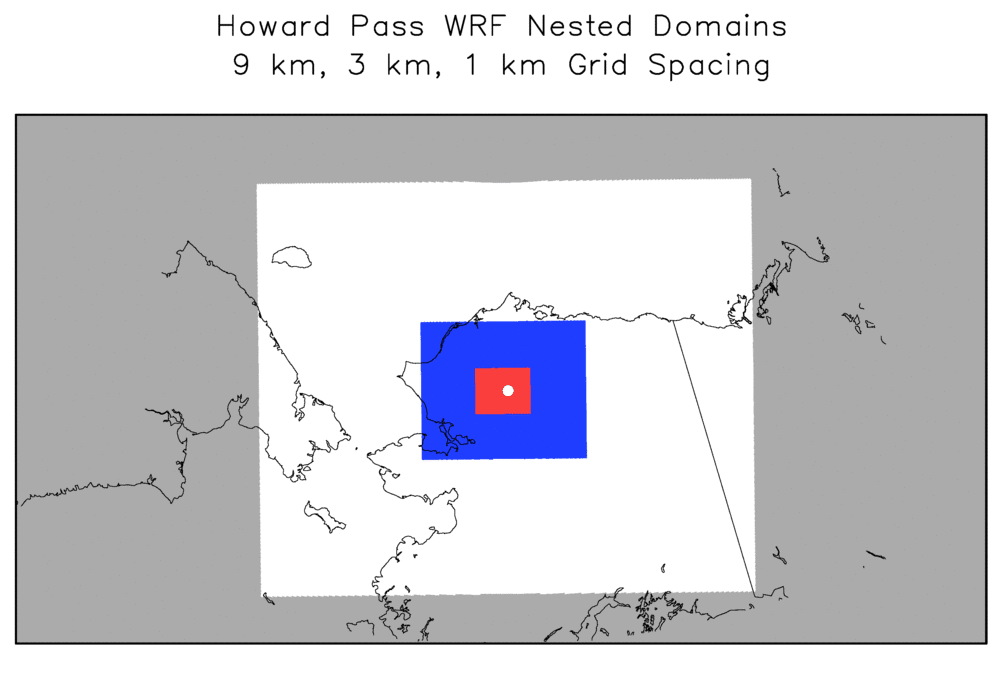 The model topography over the inner domain, with 1 km (horizontal) grid spacing, is shown below, along with the locations of 4 RAWS installations.  The model was initialized at 18 UTC (9am AKST) on February 14, and run for 30 hours. 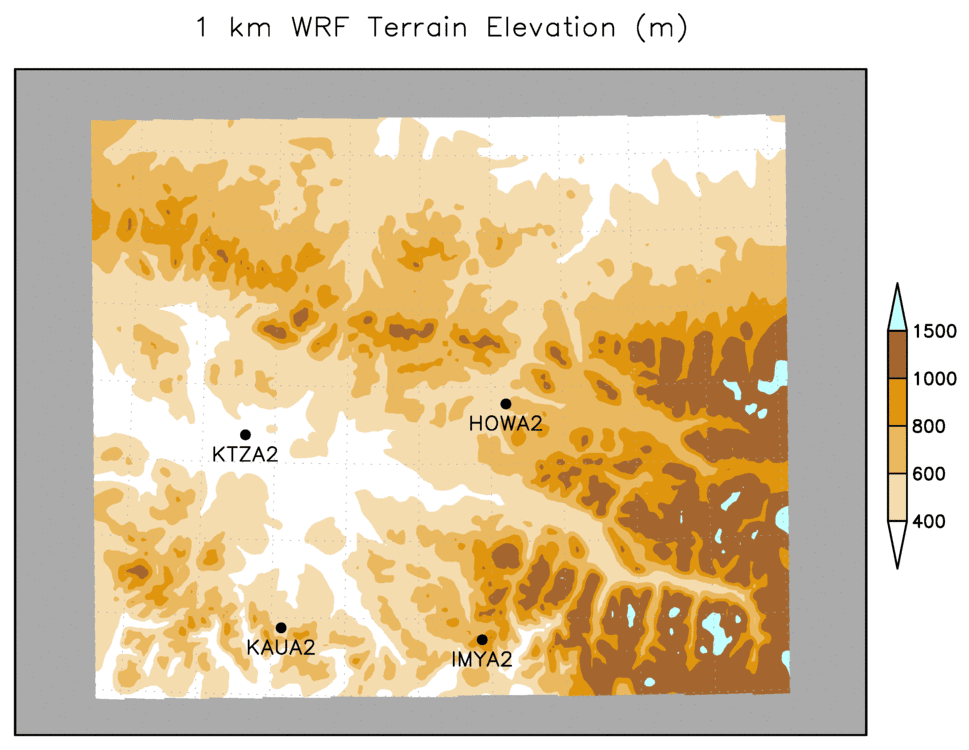 The charts below show the hourly evolution of temperature and wind speed at the location of the Howard Pass RAWS, for the 1km simulation (red line) as well as the 5km WRF forecasts that were examined earlier.  The black lines indicate the reported conditions from the RAWS.  Clearly, the high resolution simulation showed wind speeds only slightly higher than the lower resolution runs in the latter stages, and still far below the RAWS reports.  The 1km WRF forecast temperatures were also considerably higher than the reported temperatures. 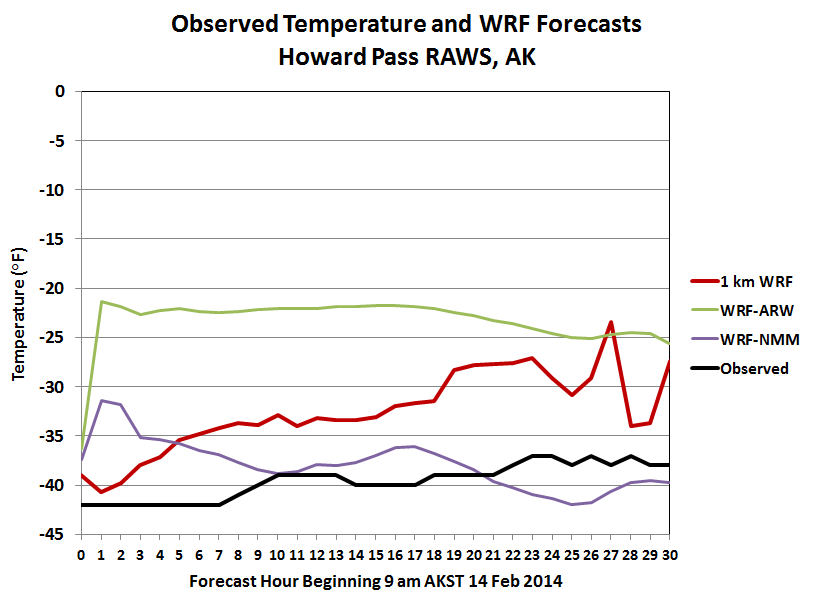 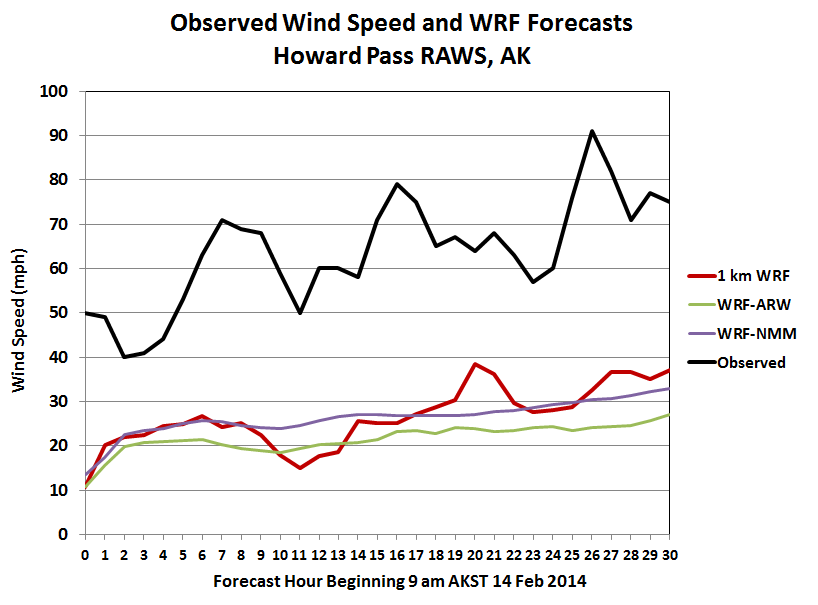 Looking at the other three RAWS sites within the inner domain, the 1km wind forecasts generally showed less discrepancy from the observations, although the forecast wind speeds were also much too low at the Noatak RAWS for most of the time.  It is interesting, however, to see that the 1km model produced a jump in wind speeds to observed levels for a few hours at the Noatak RAWS; the 5km WRF runs were unable to reproduce the higher wind speeds. 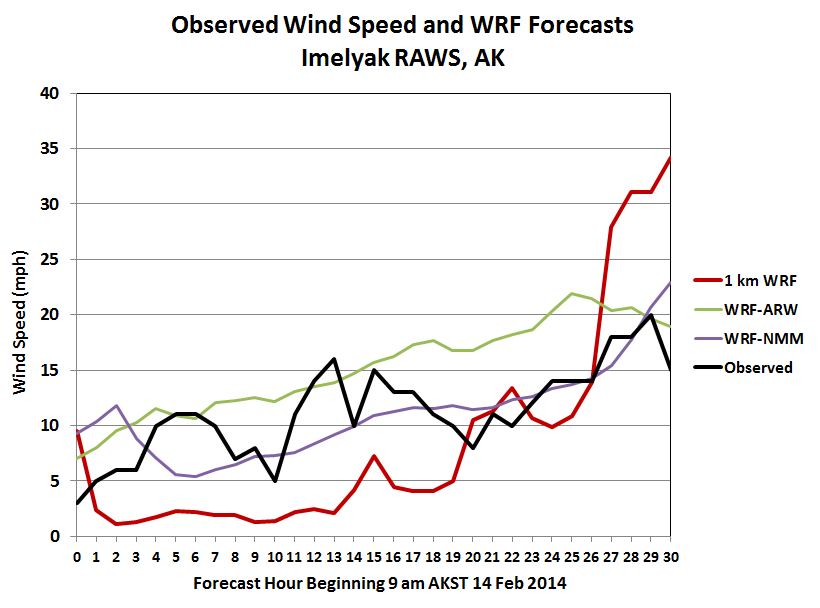 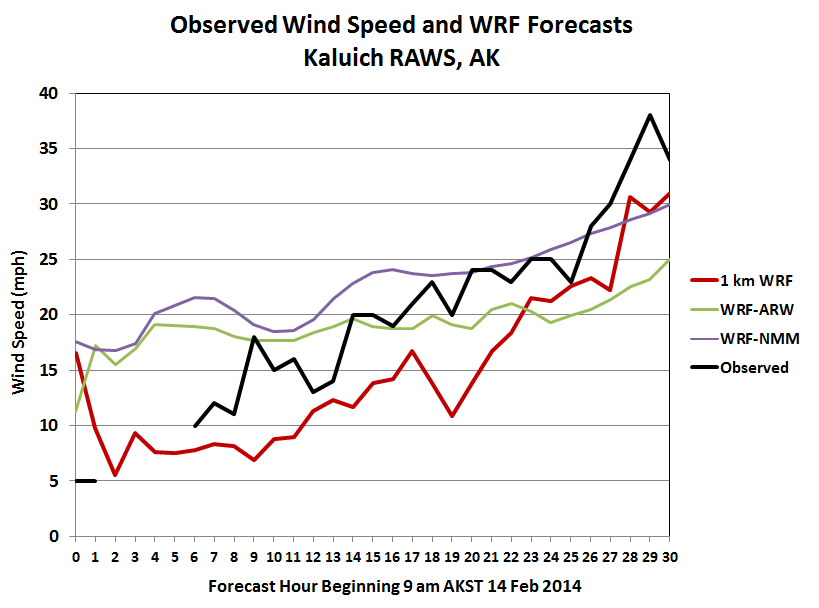 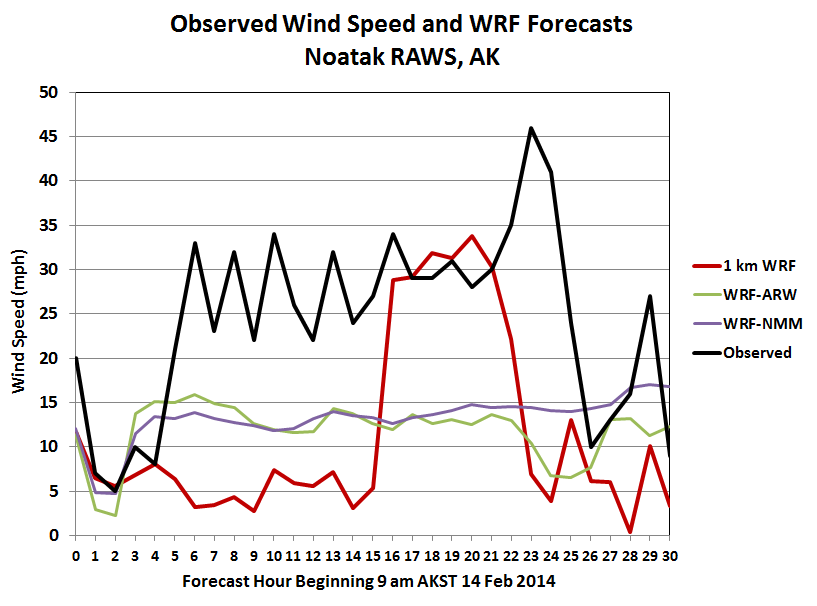 The modeled spatial distribution of wind speeds in the vicinity of Howard Pass is shown in the maps below at intervals of six hours; the RAWS location is indicated with a white dot.  Note that the wind vectors are not shown for all the grid points, as the grid is much finer than the spacing of the arrows suggests.  For scale, the plot area covers roughly 50x50 km.

It's immediately apparent that the model produced considerable variability in wind speeds within 10 or 20 km of Howard Pass, as we would expect in an environment of complex terrain.  According to these results, the highest wind speeds were located just downwind of the highest terrain but did not extend to the Howard Pass RAWS location; and the highest speeds were still well short of the RAWS observations. 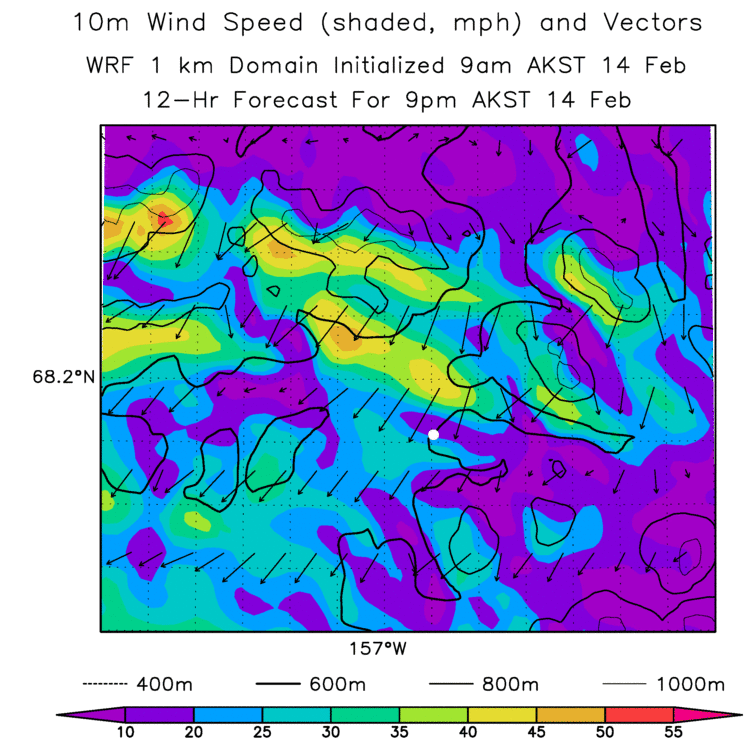 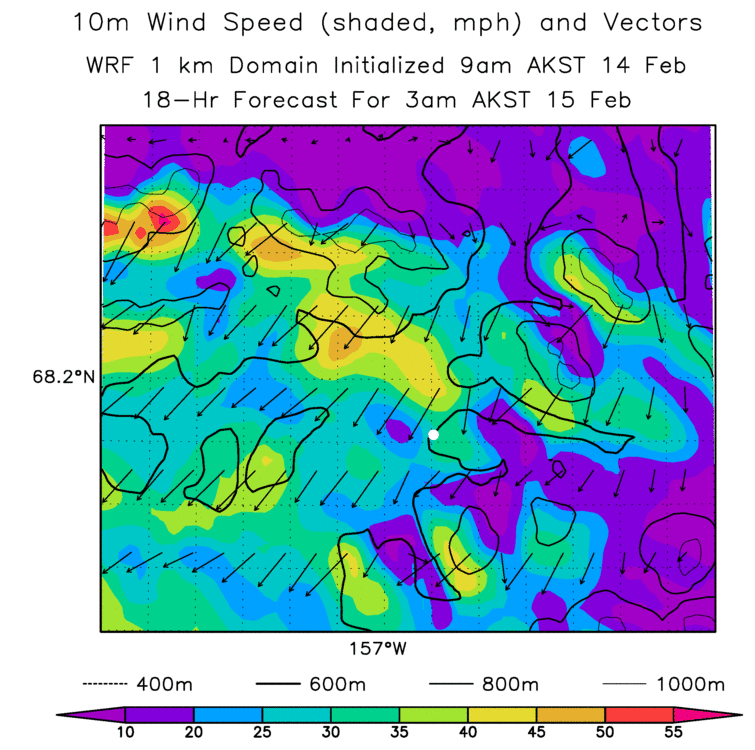 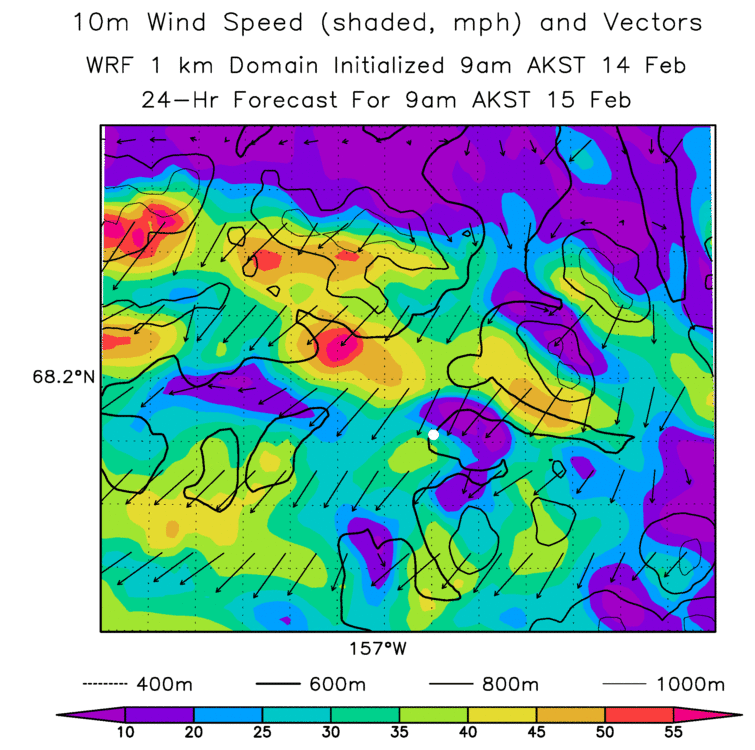 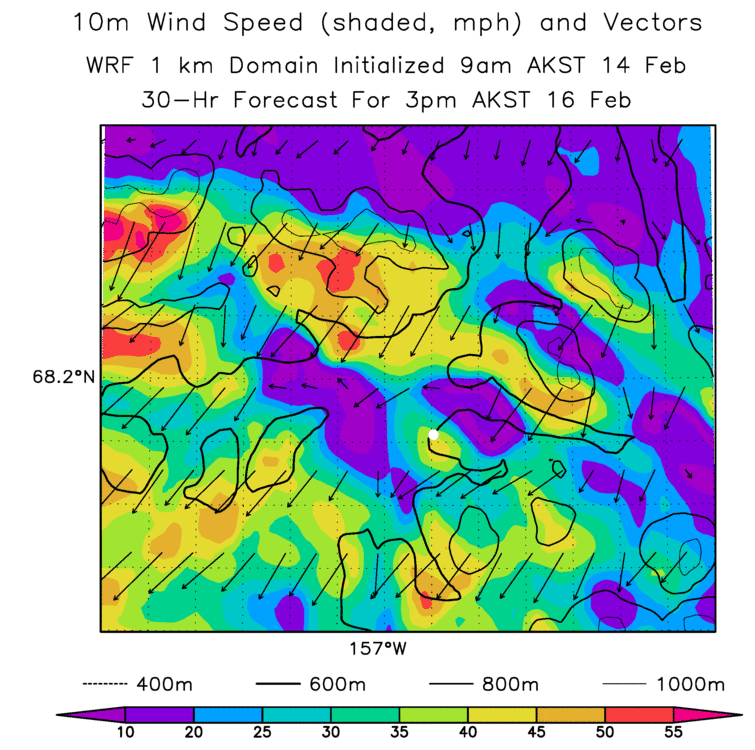 For comparison, the wind speed in the lower resolution simulations at 30 hours is shown below for a region of approximately 200x200 km.  It seems that the area-average wind speed near Howard Pass was only slightly higher in the 1km simulation, but the higher resolution allowed more spatial variability to develop. 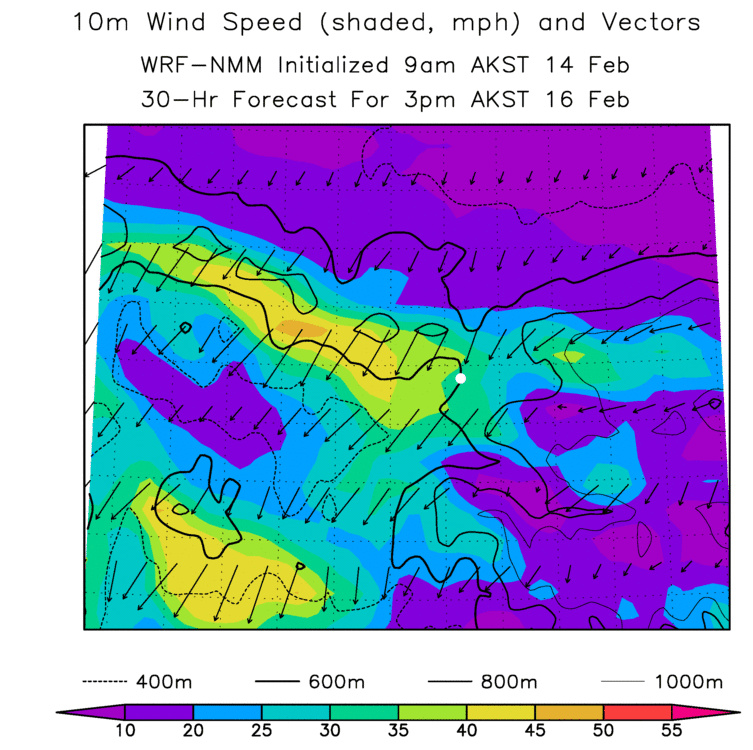 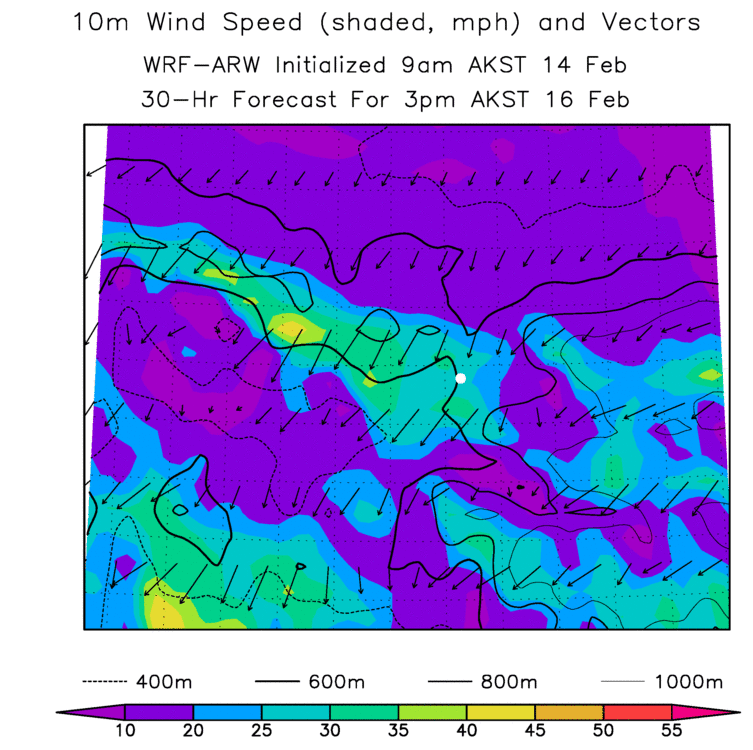 In view of these new results, is it less likely now that the reported extremes from Howard Pass represented reality?  Well, perhaps; but I would suggest that the 1km simulation may still be inadequate to capture what actually happened.  The major reason for this is that a 1km simulation is still too coarse to explicitly simulate the "boundary layer", which is the turbulent layer of air next to the ground (airflow higher aloft is usually laminar, not turbulent).  Numerical models like WRF use so-called parameterization schemes to calculate and represent the effects of sub-grid-scale transfers of heat and momentum in the boundary layer.  It probably goes without saying that the details of the boundary layer scheme will make an enormous difference for the model's predictions of wind speed near the ground - and I think it's possible that the WRF boundary layer schemes are ill-suited to capturing the kind of flow that was occurring near Howard Pass.  [Note that I re-ran the simulation through 12 hours with an alternative boundary layer scheme and obtained very similar results.]

To illustrate the flow environment over Howard Pass, the chart below shows the vertical profile of temperature and wind speed at 12 hours into the 1km simulation.  A strong inversion was present as very cold surface-level air flowed up and over the pass from the North Slope, and wind speeds were highest just above the surface. 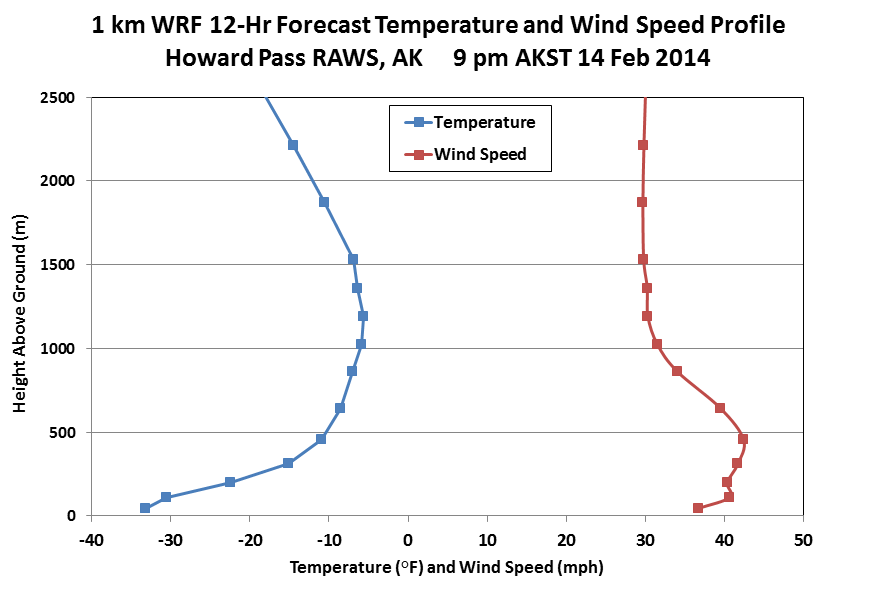 Unfortunately a mistake in the model setup meant that I didn't obtain the fine-resolution vertical profile data for later times in the model run, but we know that the winds above the surface strengthened dramatically in the next 18 hours.  The map below shows the wind speed at 825 mb, which was about 750 m above the level of Howard Pass RAWS and near the level of maximum wind speed.  Note that the 825mb pressure surface intersects the ground in the lower right, hence the lack of data.  The predicted 825mb wind speed was 80-90 mph or higher over a wide area above and west of Howard Pass; this is supported by similar plots for 850mb from the 5km WRF runs (see maps below). 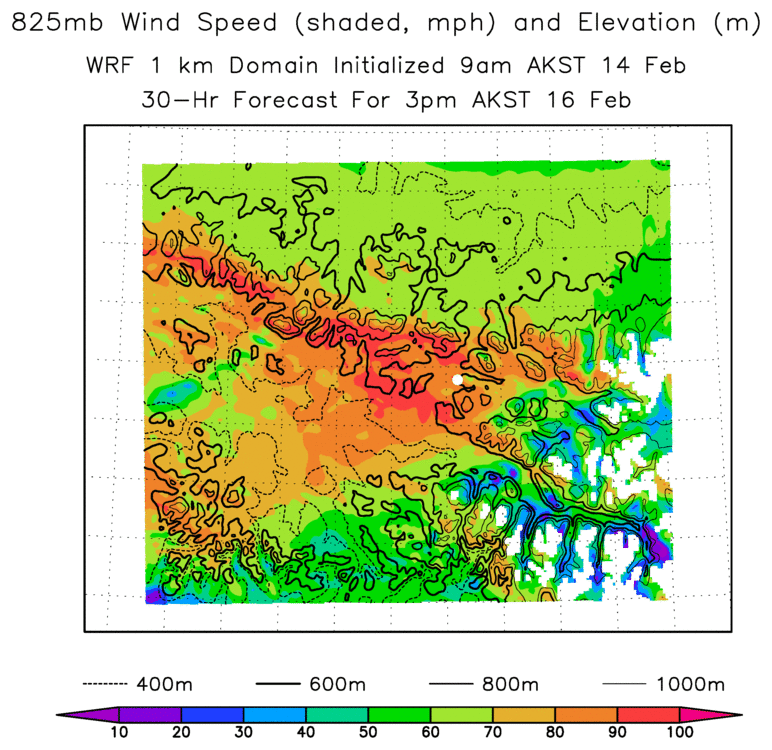 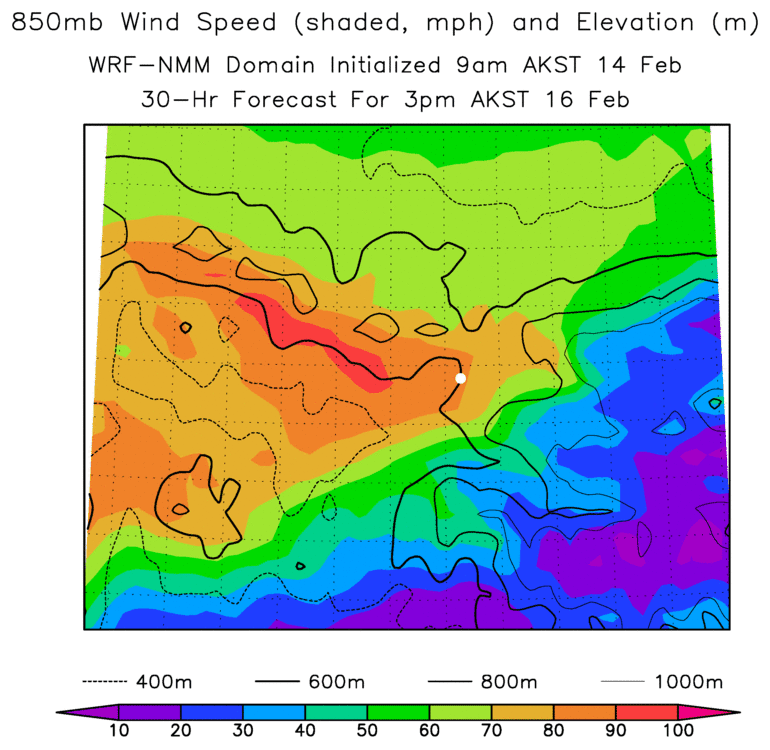 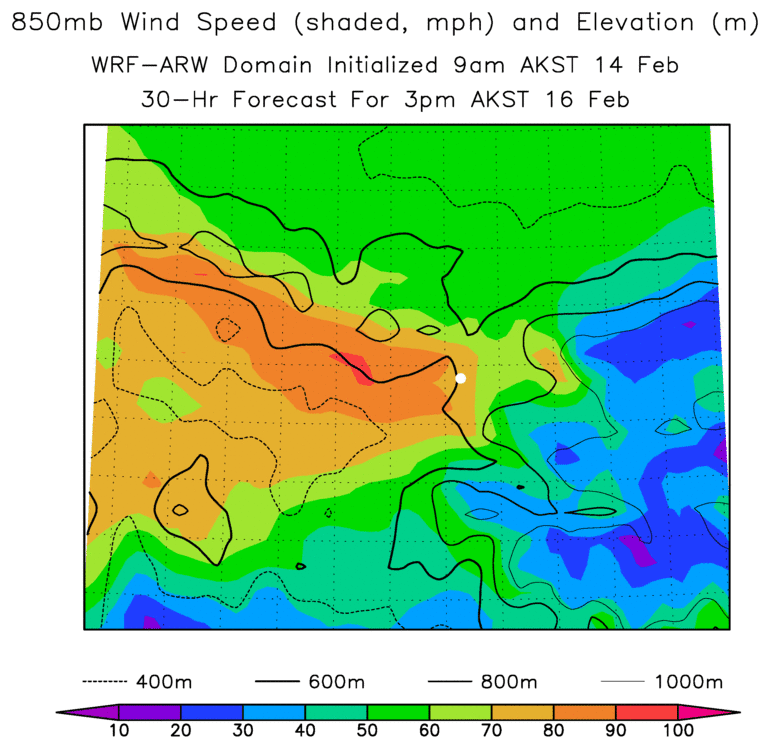 According to the model, then, very high wind speeds occurred not very far above the surface on the lee side of the high terrain, but the model does not show the high momentum reaching the surface.  Presumably this is because the strong low-level temperature inversion caused the boundary layer scheme to produce relatively little vertical mixing of momentum; but it's an open question as to whether this is realistic or not.

To summarize, 1 km modeling of the Howard Pass event fails to reproduce the extreme conditions reported by the RAWS.  However, the discrepancy between the model and the observations still doesn't necessarily invalidate the RAWS data; in the words of a famous British comedy film, "it's only a model".  The obvious way to test whether the boundary layer scheme is artificially damping the surface wind speeds would be to re-run the model with still higher resolution (close to 100m) so that the boundary layer scheme can be dispensed with; this type of simulation is called Large Eddy Simulation.  Unfortunately, however, this would probably require some dedicated research funding to obtain the necessary computing resources.

Posted by Richard James at 4:44 PM