Several days ago (February 28, to be precise) I noticed that temperatures at Cape Lisburne in the far northwest of Alaska were above freezing again; this was the 12th day since December 1 on which above-freezing temperatures were observed at that location.  A quick look at the historical data showed that while unusual, this number of warm days was not unprecedented for a single winter season.  I then got to thinking about the temperature distribution at Cape Lisburne, because temperatures above freezing represent an anomaly of 25-35 °F or more from the daily climatological mean in winter; but I have rarely if ever seen an equivalent anomaly there on the cold side, i.e. temperatures of -30°F to -40°F or lower.  This suggests a skewed distribution of winter temperature anomalies, whereby large positive anomalies are more likely than large negative anomalies.  The following chart confirms this fact, using the hourly temperature data from 1981-2010: 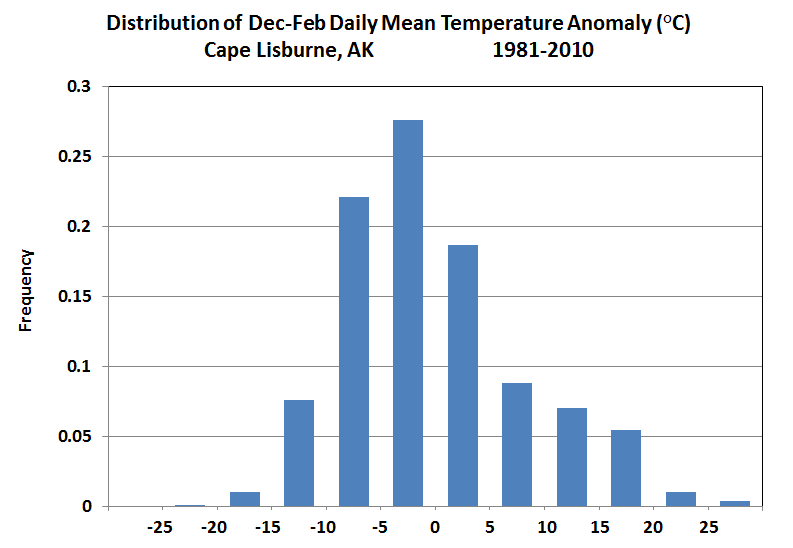 A more extensive look at the data from other locations indicates that positive skewness is observed in winter at all of the Arctic coast locations, but none show skewness as dramatic as Cape Lisburne.  Here is the skewness coefficient, i.e. the third moment of the winter temperature anomaly distribution, at several locations:

Note that the data are quite incomplete at some of these locations, notably for Barter Island, Wainwright (10-year gap in the 1990s), and Point Hope (no data before 1990).

One might expect that similar skewness would exist for coastal stations south of Point Hope, but at least for Kotzebue and Nome this is not true: here are the winter skewness coefficients:

The chart below for Nome shows that here the temperature distribution is quite negatively skewed, with large cold anomalies being much more common than large warm anomalies.  This is the kind of distribution I would intuitively expect in winter, with snow and sea ice at the surface tending to prevent temperatures from rising dramatically above the mean, but with no such constraints on cold anomalies. 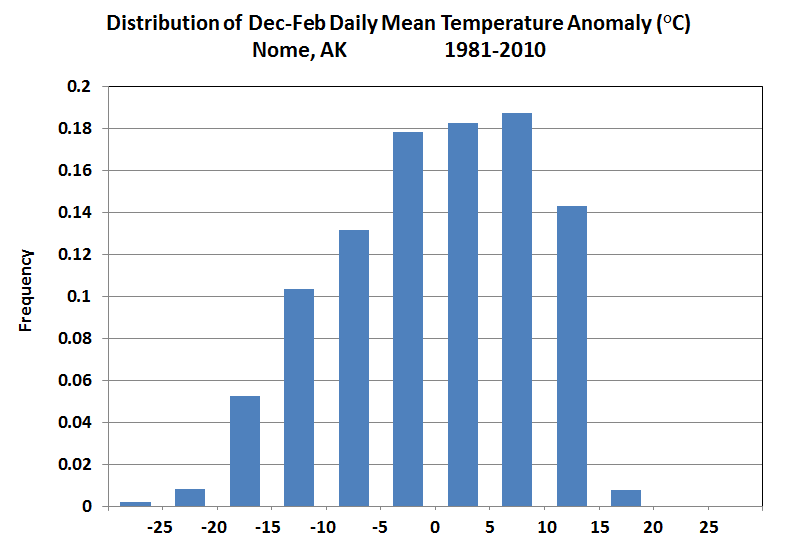 A search through the GHCN database for Alaska reveals that negative skewness is indeed much more common than positive skewness, and in fact my calculations show only Barrow and Gulkana with positive skewness out of 71 stations with somewhat complete 1981-2010 daily data.  The winner on the negatively skewed side is Glacier Bay, with a skewness coefficient of -1.15; see the chart below.  Interestingly, 61% of all winter days in Glacier Bay are above the climatological normal (mean) temperature. 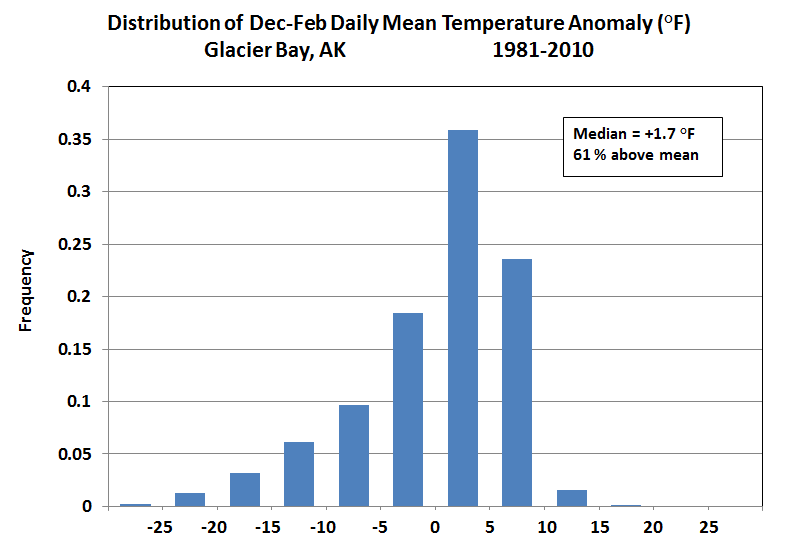 What might explain the unusual positive skewness that seems to be characteristic of Alaska's Arctic coast in winter?  I suspect it has something to do with downslope warming of already-warm southerly winds as they come off the high terrain of the Brooks Range; Cape Lisburne is flanked by high terrain immediately to the south and must experience downslope warming with some regularity.  The next step might be to examine Barrow upper-air temperatures and determine whether 850 mb temperatures behave the same way as the surface temperatures.

Posted by Richard James at 2:02 PM