[Update 6:30pm Saturday]  The latest NWS forecast graphic is ugly, to say the least.  Best wishes to all in the path of this potentially historic ice storm. 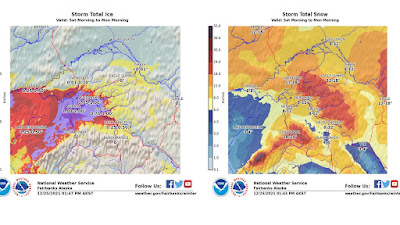 [Original post 7am Saturday]
With a major snow and ice storm bearing down on the interior this Christmas Day, it's interesting to note the similarity in the mid-atmosphere flow pattern between tomorrow (forecasted) and the 1970 pre-Christmas onslaught of precipitation in Fairbanks - see below.  Other than January 1937, the week leading up to Christmas 1970 was the wettest winter week on record in Fairbanks, with over 2" of liquid equivalent, and nearly a quarter-inch of rain.  Let's hope the rain stays away this time, but I fear the worst.
Season's greetings to all! 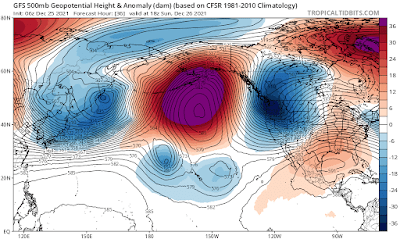 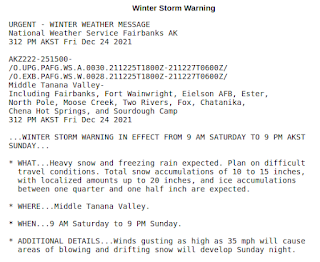 Significant rain in Fairbanks in winter (Dec-Feb) is very rare but it has occurred. Only thrice in the past century has there been a storm (this time of year) that produced more than 0.40 inches of rain. Next few days may bring another. #akwx #winter @Climatologist49 @Anisian pic.twitter.com/YZfKno7kO1

Posted by Richard James at 7:19 AM