Last week's post mentioned the remarkable 41" snowfall at Wiseman a couple of weeks ago, and I remarked that the limited historical data suggest this location is prone to occasional very large snow events.  Here's some follow-up based on a slightly closer look.

First, it's interesting to note that the average seasonal snowfall totals are not particularly high at Wiseman.  Based on a common set of 13 winters since 1996 that have reasonably complete data at Wiseman, Bettles, and Fairbanks, the median seasonal snow totals indicate that Bettles is considerably snowier overall:

Despite this, Wiseman reported daily snow amounts of 12" or more on 10 different days during these winters, whereas Bettles had only one such day, and Fairbanks had none!  (But a few days came close in both Bettles and Fairbanks.)

Here's a simple chart showing the frequency of days with snow totals in several categories, again based on a common set of 13 winters. 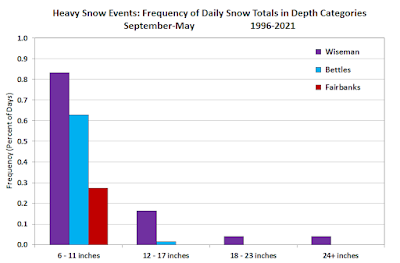 One possible explanation for the large excess of big snows at Wiseman would be that the observer(s) may have tended to report storm totals as single-day snow amounts on the final day of a multi-day event.  However, some of the big single-day totals also have large snow amounts on adjacent days, leading to extreme storm totals, such as:

Given what happened two weeks ago, with independent corroboration from the Coldfoot road crew, there's no doubt these events can happen.  It's just surprising that they don't show up in terms of high seasonal averages; but perhaps that could be explained by the observer failing to report many small events that would add up significantly over the course of a long winter.

For reference, here's the location of Wiseman; it certainly makes sense that orographic lifting would squeeze a lot of moisture out of flow that comes up from the southwest. 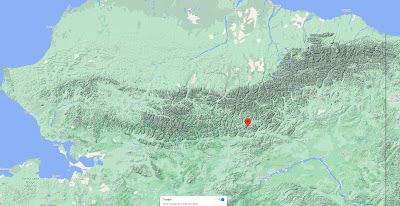 By way of comparison, the SNOTEL sites at Bettles and Coldfoot show similar snowpack statistics, with median water-equivalent snowpack peaking between 6" and 7" in late winter.  It's a little difficult to imagine that Wiseman would be much different, only 10 miles north of Coldfoot. 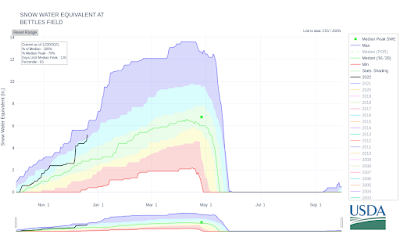 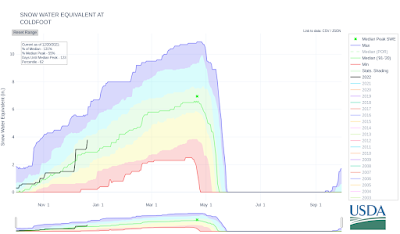 Speaking of heavy winter precipitation, Fairbanks just saw over an inch of liquid-equivalent in 24 hours, as another round of extremely warm and moist air enveloped a large part of the state.  I'll hopefully be able to post more comments on this soon.

Fairbanks Airport total precipitation (here melted snow) between 9am Sunday & 9am Monday was 1.21" (30.7mm). Not only more than twice normal for the entire month, also only second time past 92 years with more than 1" precip in Dec in 24 hours. #akwx @Climatologist49 @newsminer pic.twitter.com/t249m0ilRW

These high temperatures may not seem mild, but for areas north and west of Fairbanks, which are largely outside of the climatological "chinook zone", these are exceptionally mild for mid-winter. #akwx @Climatologist49 pic.twitter.com/9RpAxu5Xgk