It's been an active week for Alaska weather in the wake of the big warm-up, with a fast-moving storm raking the lower Alaska Peninsula on Thursday, followed by cold air rushing back into the western part of the state as the ridge rebuilds over the Bering Sea.  Wind chills along the west coast today are some of the lowest so far this winter.

Cold Bay saw hurricane-force wind gusts on Thursday, and sustained winds exceeded 50 knots (57 mph); this only happens about once every other winter on average.

More significantly - from a statistical standpoint - was the remarkably intense snowfall that occurred earlier in the week on the southern foothills of the Brooks Range: the Wiseman co-operative observer reported over 41" of snow in two days.  This is an all-time record for two-day snowfall in the Wiseman period of record, which includes about 30 winters of reasonably complete snowfall data.

The previous two-day record was 40.5" in January 1999, but 30" has been exceeded four times before this week - and February 2019 came very close (29.6").  For comparison, the all-time maximum two-day snowfall in other interior locations are as follows:

Amazingly, the Wiseman snow amounted to only 1.09" of liquid equivalent, so that's a 38:1 snow:liquid ratio.  Here's what it looked like on the nearby Dalton Highway:

Hello #snow! Check out this photo from the Dalton Hwy earlier this week. Our Coldfoot crew reported 30 inches even though the rest of the road didn't get much snow at all. It's a reminder to ALWAYS be prepared for winter conditions this time of year. Safe travels! 📷 Jason Carson pic.twitter.com/wxikiLv9ob

The incredible snowfall appears to have been a consequence of the deep southerly flow that prevailed for some days to the east of the near-record Bering Sea storm.  Lots of moisture was transported up from the south, the Brooks Range topography created orographic lift, and evidently there must have been some west-east convergence to set up a near-stationary band of heavy snow.  One wonders how much fell on the higher terrain just to the north.

On another topic, below are the November NCEI and ERA5 rank maps to follow up on my earlier comments.  In addition to being extremely cold in the west and southwest, those areas were also generally much drier than normal, much less windy than normal, and much sunnier than normal (for what that's worth at this season). 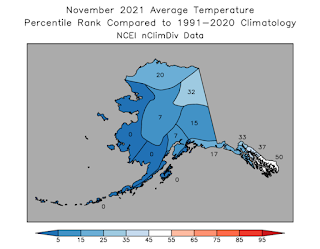 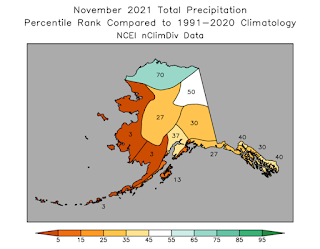 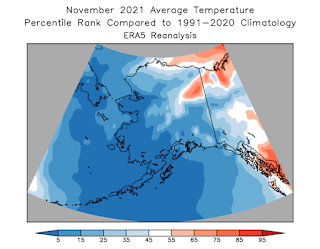 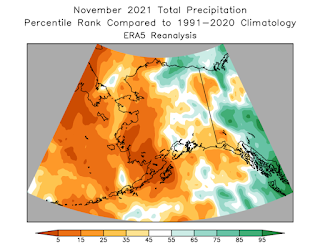 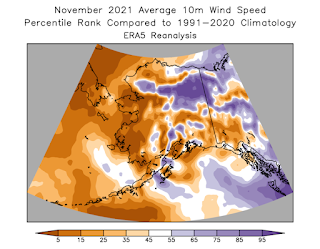 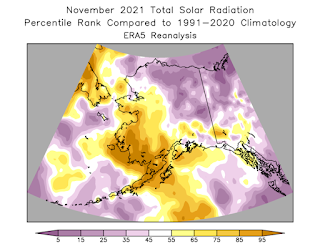