As if to add insult to injury, freezing drizzle is being reported around the Fairbanks area today, following a modest snowfall earlier in the day.  A vertical profile from this morning's GFS model run, valid at 9am, shows a cloud-top temperature of about -14°C, which is a bit colder than you would expect for freezing drizzle, but presumably in reality the cloud top is a bit lower and warmer than that.  See here for an old post on freezing drizzle. 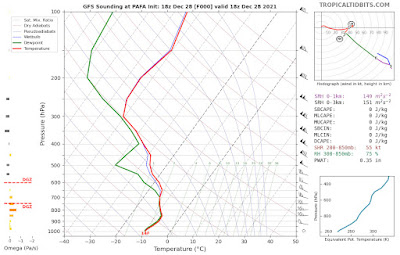 A big portion of the interior is under a Winter Storm Warning again, and the latest available GEFS forecast shows the potential for an inch or more of additional liquid-equivalent precipitation in total with this latest event. 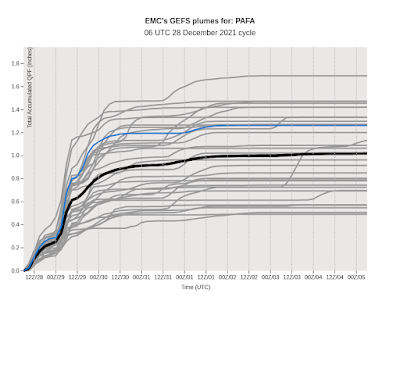 Then it will get cold.  The lowest 850mb temperature in Fairbanks back in November was -28°C, and it appears that this weekend may rival that.  There's certainly the potential for -40° again at valley level. 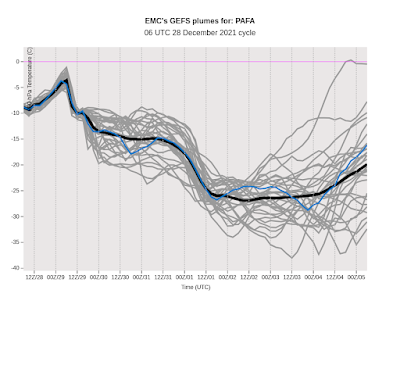 Meanwhile, extremely warm - and in some places absurdly warm - conditions are persisting in southwestern Alaska, as the powerful North Pacific ridge continues to pump warm air up from the south.  This is the 12th consecutive day that Bethel has seen 32°F or higher, which seems like a prolonged warm spell, but the record is 26 consecutive days in - no surprise - January 1937.
The turn-around from the November cold is really striking: 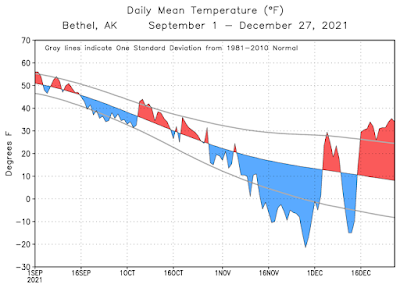 I can't fail to mention also the ridiculous warm record that was broken in Kodiak on Sunday: 65°F at the airport (the official climate site) and 67°F at the harbor tide gauge.  This is a new record for the entire state of Alaska in the month of December.  Astonishingly, a temperature of 65°F or higher has not previously been seen in Kodiak between early October and late April, i.e. more than 6 months of the year.  On that basis, it would be the equivalent of Fairbanks reaching nearly 70°F at this time of year. (Note that there is Kodiak data from January 1937, but the best Kodiak could do then was 50°F).
What could explain such a dramatic shift from the cold of November to the extreme warmth this month?  Obviously it's tied to the position of the North Pacific ridge, but why did it shift east?
To illustrate the shift, here's a time-longitude diagram showing the recent and forecast evolution of 500mb heights in the 45-75°N latitude band.  During November we can see yellow/orange colors (ridging) to the west of Alaska and a preponderance of blue (troughing) at the longitude of Alaska, and this was the pattern that produced the cold.  However, beginning about 10 days ago, a very powerful ridge emerged to the east of the Date Line, and it has been holding steady with remarkable persistence (and may generally continue to do so, if this forecast is correct). 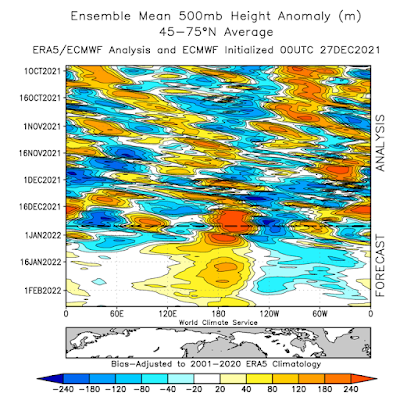 Now here's what I think forced the transition to a more easterly ridge: an eastward shift in tropical convection (thunderstorm activity) in early December.  The graphic below shows areas of enhanced convection along the equator in blue and suppressed convection in yellow, and in the first half of November we see that convection was focused from the eastern Indian Ocean to Indonesia.  However, at the beginning of December the convection migrated into the western Pacific Ocean, and this represents a breakdown in the typical La Niña pattern over the equatorial ocean.  As I discussed in this post, the typical cold of a La Niña winter in Alaska is linked to the position of the convective activity, and so it makes sense that the North Pacific pattern would shift in the weeks following the tropical change.  This also means that if the La Niña forcing doesn't re-emerge, then sustained cold may be less likely in the rest of winter. 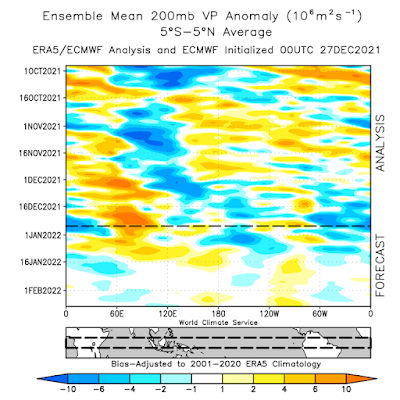 For the technically inclined, the eastward shift in tropical convection was brought about by a strong eastward-propagating pulse of the Madden-Julian Oscillation (MJO); see here for an introduction to the MJO.  The phase diagram below demonstrates the change of phase from November (green) to December (blue), with the key transition occurring around December 1, as noted above.  If the MJO activity eventually makes it back to the lower part of the diagram, then it may again reinforce La Niña-like patterns over the North Pacific, but this appears unlikely to happen before late January. 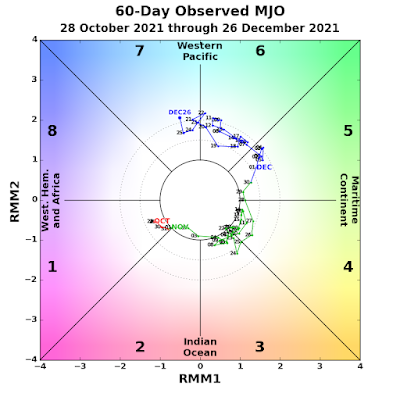 Posted by Richard James at 1:53 PM