This is just a quick follow-up to note the rare and remarkable character of Monday's widespread warmth over western, central, and northern Alaska.  With a strong low pressure system over far eastern Russia and a powerful Pacific ridge to the south, strong southwesterly flow swept over western parts of the state, and temperatures rose above freezing across vast areas.
Here are the high temperatures observed that day; click to enlarge (apologies for the split image).
North: 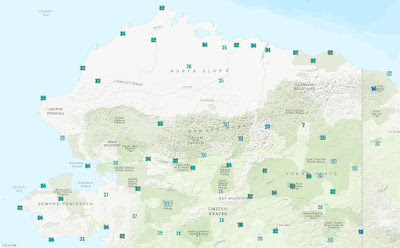 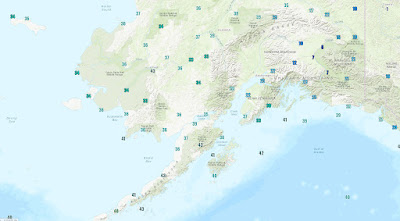 It's remarkable to see that the temperature reached 32°F or higher at valley level nearly everywhere to the west and north of the Alaska Range, except in the eastern interior and the Brooks Range.
I looked at the history of the following 8 observing sites for dates when 32°F was reached at all of the locations, and this is the first time on record for December.  Here are Monday's high temperatures at the 8 sites, which all have data back to at least the early 1950s.
King Salmon  37°F
Bethel  34°F
McGrath  37°F
Fairbanks  33°F
Bettles  34°F
Nome  34°F
Kotzebue  33°F
Utqiaġvik  32°F
There have been a few early November dates when all 8 sites reached 32°F (including last year), but the only other date in deep winter that achieved this feat was February 4, 1982; it has not been observed before in December or January.  However, if we take out Utqiaġvik, then it's not as uncommon, particularly in recent years: 2015, 2016, and 2017 all saw similar widespread warmth in December, but not extending all the way to the Arctic Ocean.
And a quick note on current weather: the thaw has lasted about a week now in the Bristol Bay region, which is an astonishing turnaround from November's extreme cold.  This morning the warmth is spreading inland again, and it's raining and +34°F at Aniak.  Contrast that with -34°F at Fort Yukon.

Posted by Richard James at 6:13 AM