Cold November in the Books

What a month November was, with amazingly persistent cold over western and southwestern areas after the first week of the month.  As expected, it was easily the coldest November on record at King Salmon. 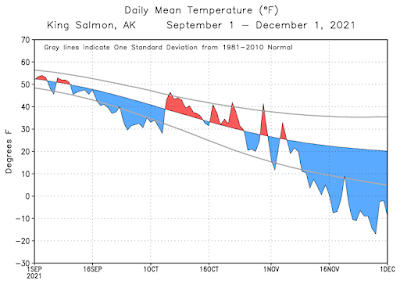 Rick Thoman's November temperature map (below) shows the depth of the cold anomalies - over 20°F below the 1991-2020 normal in spots - but also illustrates that not all of the state was affected: it was warmer than normal in some locations! 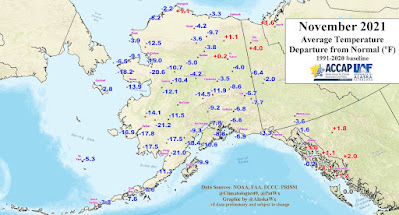 Given that cold was not universal, it's remarkable to see that UAF's statewide temperature index stayed below -8.0 for 17 consecutive days (see below).  A value of -8.0 corresponds to the 10th percentile of the 1991-2020 distribution for the time of year, so the state as a whole was colder than the 10th percentile for 17 straight days.  Read more on the UAF index here.  Interestingly the index reveals that the cold back in September - although much less dramatic in absolute terms - was comparable in statistical significance on the days when it occurred, although it didn't last all that long. 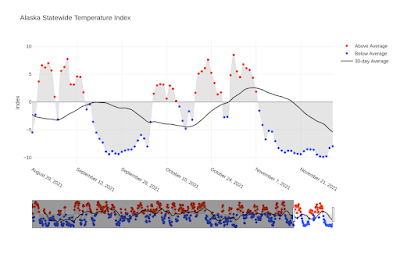 Cold continues today, with another -28°F at King Salmon (only two other years have ever been this cold so early in the winter), and -30°F at Unalakleet (and they saw -33°F on Sunday morning).
Also, it's worth noting Alaska's first -50°F of the winter at Toolik Lake on Tuesday morning.
Posted by Richard James at 11:34 AM