How Cold Will It Get?

Given the magnitude of recent extremes in Alaska, it only makes sense that the upcoming cold will also be quite extreme.  The dramatic change will occur as the big North Pacific ridge builds north over the Bering Sea and into the Arctic, so that much of Alaska will soon find itself on the opposite side as far as temperatures are concerned.  Here's the 500mb height forecast for Monday morning, with color shading indicating the departure from normal. 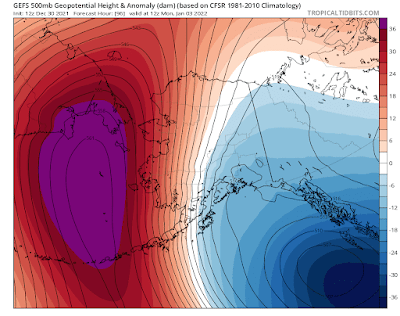 By late Saturday, a very cold air mass will be centered over the southeastern interior, with predicted 850mb temperatures below -35°C.  That's seriously cold. 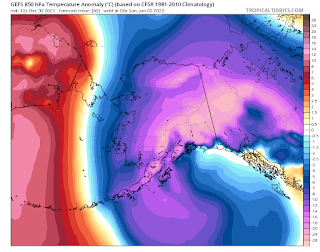 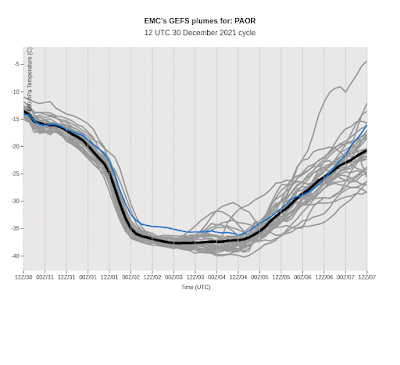 An 850mb temperature of -35°C hasn't been observed in Fairbanks since 1999, although late January 2012 came very close.  However, it looks like the core of the cold will miss Fairbanks, so -30°C or so seems more likely on the Fairbanks sounding.
Cold at valley-level will be severe, but just how bad will depend on winds and cloud cover, as usual.  Widespread -40s seem likely, and given the location of the cold core I wouldn't be at all surprised to see -60°F at Chicken.  The last -65°F at Chicken was in 2009.
Speaking of cold, it's worth noting that southeastern Alaska has already been experiencing the cold side of the flow pattern in recent weeks, even while extraordinary warmth has occurred elsewhere in the state.  Ketchikan dropped to 0°F and saw two back-to-back days with high temperatures below 20°F; both of these feats were last achieved in 2012. 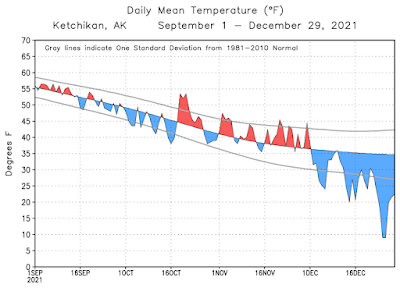