Cold…But Not as Cold as It Used to Be

It's another brittle morning in Fairbanks-land, with temperatures in the 30s and 40s below in the valleys, and even most hill sites near or below 20 below. At the Fairbanks Airport the temperature did nick down to 40 below just before midnight Wednesday evening, so today, Thursday, with a low so far of 44 below makes this the sixth day in a row with a low of 40 below or lower.  The last time there was a six day streak of 40 below lows wholly in December was 1975 (but several asterisks for recent  as long or longer streaks partly in December: Nov 29 through Dec 04 1990, Dec 28, 1999 through Jan 05, 2000 and Dec 28, 2008 through Jan 11, 2009).

Here's a plot of temperatures in the lowest 1000 meters from the Thursday morning sounding. This morning's comparison though is to one of the great cold snaps in modern times. The blue line is the sounding from the afternoon of December 27, 1961. 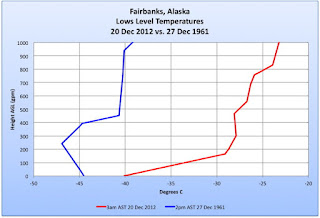 Notice that surface temperature on the ice foggy afternoon was about 4C colder than this morning. But look at the temperatures above the valley floor: there was no surface-based inversion at all (deep, prolonged ice fog). Temperatures 200 meters up were about 18C colder that afternoon than this morning, and the temperature was colder than -40F through almost the entire lowest kilometer.. At the peak of the 1961 cold snap, the UAF West Ridge coop site (the observation site at the time was near what is now the Jack Townshend Point near the Museum of the North) recorded a low of -66F, by far the lowest of record there. Fairbanks Airport recorded a low of 62 below on December 29, 1961, the all-time record low for December.
Posted by Rick at 8:51 AM