Four weeks ago today, Saturday, November 10th, the last significant snow fell in Fairbanks. Since then, just 0.1 inches of snow has fallen (the slight dusting  early Wednesday morning ). For comparison, the 1981-2010 normal snowfall for this four week period is 11.2 inches. Given that autumn is the snowiest time of winter, how unusual is this? As I discuss below, being below normal is not unusual at all (in fact, being below normal is "normal"), but 0.1" of snow is the lowest of record in Fairbanks for this period. In fact, only one other time (1953), has there been less than an inch of snow in Fairbanks between Nov 10 and Dec 08.

To put this in a more complete context, here is a histogram of total snowfall for the four weeks November 10 through December 08 for the Weather Bureau/NWS era in Fairbanks (begins December 1929). 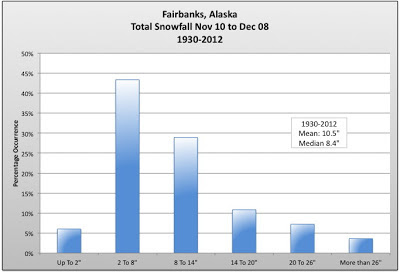 Notice that the distribution in the histogram is not normal. i.e. does not have a "bell-shaped curve". This is typical of precipitation and other climatological statistics that have a natural lower bound (can't have less than zero snow, wind speed, etc), but have an effectively unbounded upper end AND the lower bound is close to observed values (for you stat geeks, this is a Weibull distribution). This is reflected in the difference in the 83 year median and mean values, with the mean snowfall 25% higher than the median (recall, the median is the value that half the sample is above and half below). Unfortunately, and this is a pet-peeve of mine, NCDC uses the mean snowfall (and precipitation) as "normal". But, because of the skewed distribution, most of the time snowfall (and precipitation) will be below "normal". For example during 1981-2010 climate normals period, the snowfall Nov 10-Dec 08 was below normal 60 percent of the time. Happily, snow is on the way for Fairbanks-land, which will reduce the current dry spell to a statistical memory—at least until frozen pipes start being reported in February.
Posted by Rick at 10:14 AM