Here is a plot of hourly temperatures Sunday at a handful of sites in greater Fairbanks-land. 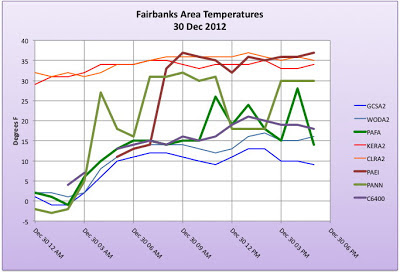 The low lying areas such has Goldstream Creek (GCSA2) and Woodsmoke PWS (WODA2) have been unable to pop the inversion due to the clearing that followed the occlusion, while high elevations, Clearly Summit (CLRA2) and Keystone Ridge (KERA2) have been breezy and in the warm air for a couple days now. At both valley and higher elevations temperatures have been fairly stable.

But look what's happening right near the Tanana River: Eielson AFB (PAEI) was cold, then gusty southeast winds broke through and temperatures have been very mild since mid morning. This is quite common at Eielson. Both Fairbanks Airport (PAFA) and Nenana Airport (PANN) have had big temperature swings during the day as the differing airmasses waffle back and both across these specific points. The Alaska Fish and Game Alaska Division of Geological & Geophysical Surveys* PWS on College Road (C6400)) has not had the swings in temperature as the airport but is a milder version of Goldstream Creek.

Note: There is a chance the Fairbanks Airport temperature swings are not real but represents intermittent sensor failure. However, given the overall situation, the reported temperature variations are probably real.

*Thanks to Chris S. for pointing out my incorrect attribution of the operator of this PWS.
Posted by Rick at 5:09 PM