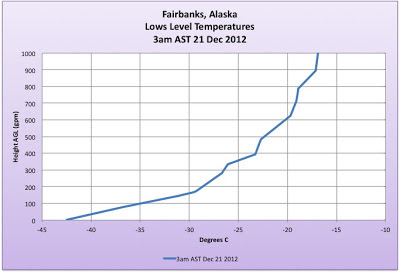 Thursday evening I was amused by various Facebook posts with someone somewhere forecasting a low of 60 below for this morning at Fort Wainwright. Not only would such a temperature be extremely unusual, even a cursory look at the meteorology would have suggested that was highly unlikely: the air mass was already warming, as evidence by the gradually rising temperatures at higher elevations. This morning's sounding shows  moderate surface based inversion (by Fairbanks standards) with the air 500 meters up about 20C (36F) warmer than at the surface.

As I wrote about last winter, at 65 degrees north latitude there is no appreciable solar heating in the weeks around winter solstice, which means there is no change in solar heating that would cause one to think the temperature would drop overnight. The lack of auto traffic overnight can result in thinning of ice fog (though that's not a hard and fast rule), which can allow for surface cooling if the ice fog thins enough. In general though, with a gradually warming airmass, no clouds and no wind, Interior Alaska valley temperatures in late December should be nearly steady, eventually rising a bit.

The 2-day plot of the 2-meter temperatures from the sensor near Smith Lake on the UAF Campus shows all this nicely: there is no sign of any afternoon solar related temperature increase and since about 4pm Thursday there is has been minimal temperature variaiton.

Low temperatures since Thursday afternoon include: