With "heavy snow" in the news for Fairbanks-land, I thought it might be useful to look at how often such a thing happens in the Golden Heart City. As usual with this kind of question, it's a simple question that is actually hard to answer.

First, what do we mean by "heavy snow"? A long used Weather Service definition in Fairbanks has been "heavy snow" mean six inches or more in 24 hours. The snow might be heavy and wet (for you old-timers, think September 1992), or  it might be dry powder, like this past March. That does not figure in the equation. Just, is the snowfall 6" or more in any 24 hour period?  So, now that we have a definition of "heavy snow", we can readily answer the question, yes?

Why is it hard to answer? Historically, snowfall as been recorded for some 24 hour period (since the late 1930s in Fairbanks on a midnight to midnight standard time schedule) AND the maximum 24 hour snowfall in each calendar month is recorded, but the maximum 24 hour amounts per storm have never been systematically archived. What can we derive from the data we have?

First, since 1930 there have been 84 calendar days with 6" or more of snow, just about one per year, on average. However, this would miss a "heavy snow event" such as the following hypothetical example:  snow starts at at 6pm, with four inches of snow by midnight, then it keeps snowing til noon with another four inches. That's 8" of snow in 18 hours, a very healthy snow event for Fairbanks, but neither calendar meets the criteria.

However, this must overestimate the number of heavy snow events, because every calendar day that has six inches or more will get counted twice. To see this, image that December 9th has no snow, December 10th as 7" of snow, and December 11th has no snow. When we do the two-day totals, the two-day total for the 10th is 7" (0+7), and the total on the 11th is also 7" (7+0).

So if we subtract out the 84 calendar days days with 6" from the 250 days with a two day total of 6" or more, we're left with 166 "unique" days with six inches or more of snow in two days. Now this must still overestimate the number of times that six inches of snow falls in 24 hours. Sometimes that six inches or more will fall over a period longer than 24 hours (up to 48 hours), and there will be a few events when close to, but not quite six inches of snow fell AND measurable snow fell on the day before and the day after that will result in an overcount.

It would be possible to whittle this down further by going through and manually checking the 166 days and removing all days in months when we know that the 24 hour snowfall was less than 6 inches, but that will have to be a task for another day.  What we have here does not quite correspond with the NWS traditional definition (this has more events), but we are probably in the ball park (I'd guess this is probably still over counting by something like 25%).

Of course, some winters have multiple heavy snow events and others none at all. Here is the histogram showing the distribution: 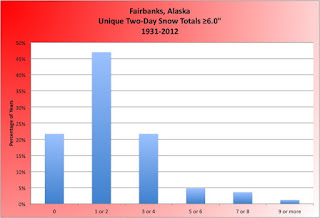