When teaching principles of weather to a class full of college students (non-science majors), they are usually surprised to hear that in winter the coldest days are often sunny (or clear) and the warmest days are cloudy. That is counter intuitive to their summer experience. However, the basic principle of downward radiation of longwave energy from clouds is a universally accepted principle. When there is no offset from a reduction of solar energy (insolation), the net effect is for warmer temperatures.

In Interior Alaska, there is a variable length of time each winter with little to no insolation. For Fairbanks, the time period between November 29th and January 12th (45 days) experiences less than, 10 watts per square meter of insolation per day. This is a theoretical calculation based on the latitude and the astronomical position of the earth. The first figure shows the theoretical insolation for Anchorage (blue) and Fairbanks (red).

The GHCN database contains average daily percentage of cloud cover for most days between 1967 and 1997. This is enough time to build a climate normal of cloudiness. To determine the effect of cloud cover on temperature, I looked at the 45 days identified above with little insolation and then charted the average cloudiness for different temperature groupings. The second chart shows the relationship between temperature and cloudiness in Fairbanks on all days between Nov. 29 and Jan. 12. At first glance there appears to be a problem. The very coldest days (<= -40) have more clouds than days slightly less cold. My guess is that ice fog causes this confounding of the cloud cover vs. temperature relationship. Interestingly, some textbooks do not consider fog as a cloud type but that is a debate for academics to hash out.

As a non-Fairbanksan, I don't know what people prefer. Sunny and cold, or cloudy and not as cold? 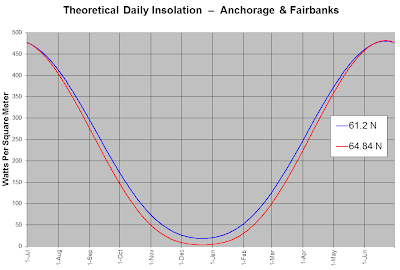 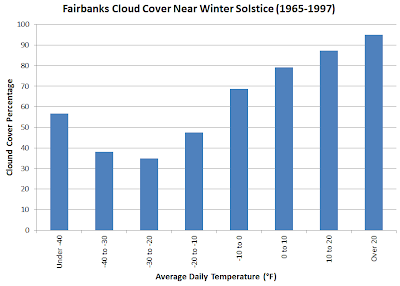