As Richard noted in a recent post, there is little to no solar energy for much of Alaska this time of year. In fact, there is no functional solar heating anywhere north of Fairbanks for the next several weeks. In looking at hourly data for Bettles from NCDC, I looked at the average hourly temperature for every day of the year to see when solar energy stopped influencing daily temperatures (n=45 years). Bettles was chosen due to its location far away from any alternate heat source (e.g., an ocean).

Though trial and error, it appears that when the sun is 3° above the horizon or less, there is no perceptible diurnal temperature difference. At 3° above the horizon, the theoretical solar energy is 9 watts/square meter. At the latitude of Bettles, that translates to a 55-day period of no solar heating. The next two charts show the annual solar elevation for Bettles and for Barrow. 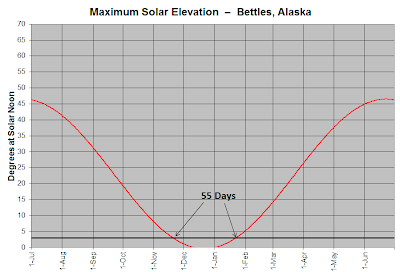 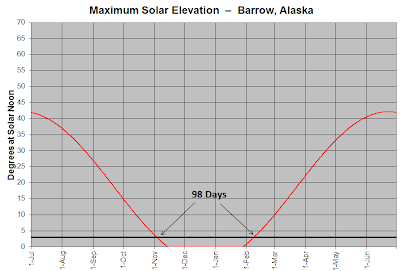 The chart immediately below shows the average hourly temperature for the 55-days at Bettles where the sun is less than 3° above the horizon. Interestingly, there is a very slight bump at the equivalent of solar noon – even on days when there is no sunrise at all! 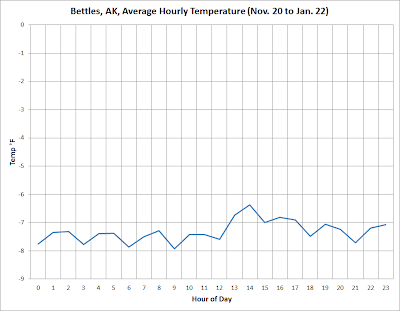 The final graphic (map) shows the number of days with no effective solar heating; i.e., to maximum solar elevation is 3° or less. The 835 GHCN stations are shown as green dots. 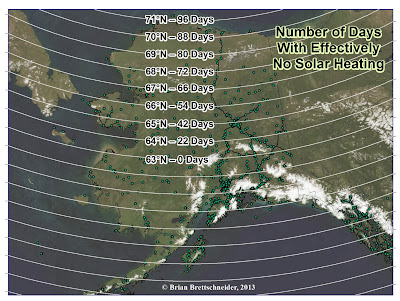 Here are some charts showing the hourly temperatures and sea level pressure readings for the days with no sunrise and no sunset at Bettles (Dec. 12 to Dec. 31 & June 12 to July 2 respectively). Note: Due to Leap Years and the procession of the equinoxes, the dates will be slightly different from year to year. 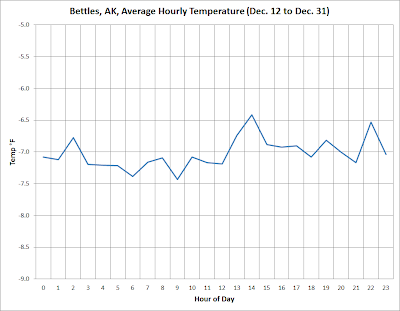 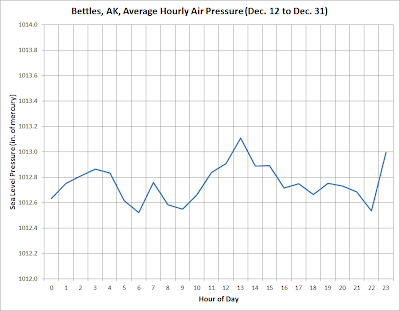 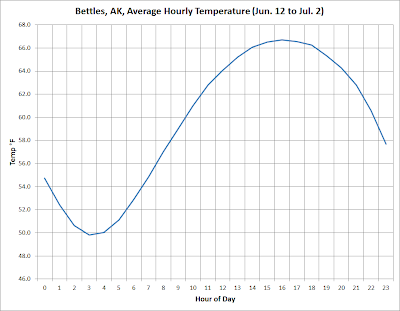 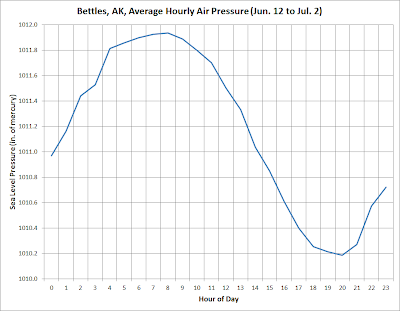 The final (?) chart shows the hourly temperatures for Barrow between December 1st and January 27th. December 1st was chosen to account for the variability in sea ice pack closure around Barrow. January 27th was chosen due to that being the date that the sun is still below the horizon. The local effect at Bettles disappears. When only those days when the sun was within 2 degrees of the horizon were chosen, the line was still effectively flat. Interestingly, the point at which a daily insolation pattern was established in the Spring wasn't until the sun was 5° above the horizon (~Feb. 14th).

Also, the 3-hour pattern that Eric noted is highly exaggerated for Barrow. It turns out that this is due to some days recording temperatures in 3-hour increments instead of hourly. Those occurrences are much more frequent in the earlier part of the climate record when the temperatures at Barrow were significantly colder. It will take more work to tease out those obs. 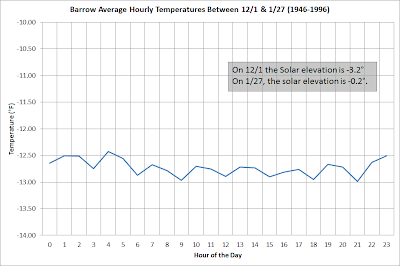