The temperature at Fairbanks airport touched -40° this morning for the first time this winter.  This is very close to the long-term median date of December 28 for the first -40° reading in Fairbanks, but slightly earlier than the 1981-present median date of January 4.  The long-term median for latest -40° reading is February 10.  Note that -40° is never reached in slightly more than 10 percent of winters in Fairbanks (15 percent since 1981).

It's colder yet at many other interior Alaska stations, including -50 °F in Eagle and -58 °F in Chicken.

The chart below shows the annual number of days reaching -40 °F (total column height) and -50 °F (red columns) in Fairbanks since 1930.  The long-term decline is very noticeable, especially for -50 °F days which have become rare.  However, there was tremendous year-to-year variability prior to about 1975; some winters had few or no extreme cold days, while others had many.  Superficially, it appears that variability has decreased, but this could be an artifact of sampling a smaller portion of the climate distribution in recent decades. 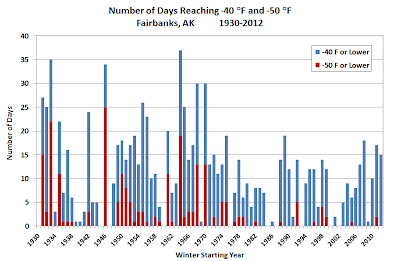 Webcam photos from around Fairbanks show the clear skies and shallow ice fog that are typical in association with deep cold. 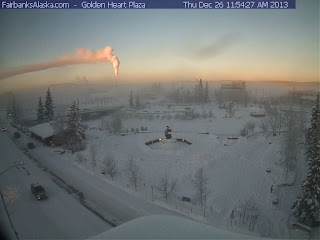 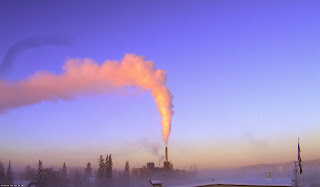