With today being the winter solstice, I was curious to look at the relative partition of snowfall and accumulated cold in Fairbanks before and after the astronomical midpoint of winter.  Of course we know that the thermal midpoint of winter occurs well after the solstice, especially near the north and west coast of Alaska, but what fraction of winter's cold and snow occur before the solstice?  To address this, I looked at freezing degree days as a measure of accumulated cold, and total snowfall; see the charts below. 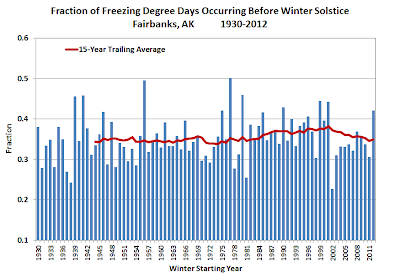 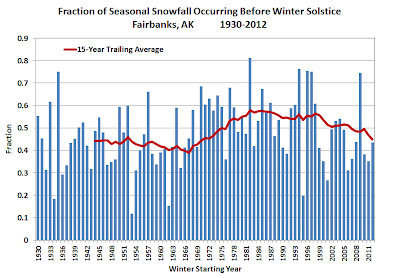 According to the long-term (1930-2012) average, it is typical for about 35% of the freezing degree days in Fairbanks to occur before the solstice; in other words, nearly two-thirds of the cold still lies ahead, on average.  In 1977-78 the degree days were almost exactly evenly divided before and after the solstice, but in every other year there has been more cold after the solstice.

As one might expect, there's more variability in the partition of snowfall totals, ranging from 12% of the seasonal total occurring before the solstice in 1953-54, to 81% in 1982-83.  Interestingly, it was not uncommon for more than half the seasonal total to fall before the solstice from 1970 to 1998, but the long-term average is 48% before the solstice.  The multi-decadal trends are interesting for both temperature and snowfall, with recent years seeing a shift towards cold and snow occurring preferentially in the second half of astronomical winter; this is more in line with the pattern prior to about 1970.

A quick look at other cities in Alaska shows notable variability in the partition of snow and cold; here's the 1930-2012 average of the fraction of cold and snow occurring prior to the solstice: