Last week's post about the first -40° temperature of the winter in Fairbanks provoked a bit of discussion about the causes of the long-term decline in the frequency of very cold days in Fairbanks.  As reader Gary noted, there are numerous candidates for possible drivers of the long-term change, including changes in wind, cloud cover, and air mass characteristics; we also can't exclude the possibility of an urban heat island effect or subtle station siting issues.  As a simple first step at tackling this, I looked at the 850 mb temperatures from Fairbanks balloon soundings since 1948; the chart below shows the annual (cold season) number of days with 850 mb temperatures below -26 and -32 °C; these thresholds were chosen because the long-term frequencies of occurrence are close to those for -40 and -50 °F at the surface, respectively.  Last week's chart of -40 and -50 °F frequency is also reproduced below, except with an adjusted time scale for ease of comparison between the charts. 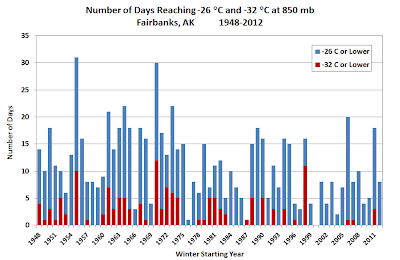 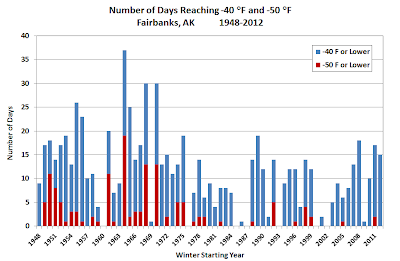 It's plain to see that the frequency of very cold temperatures aloft has also shown a notable decrease since the mid-1970's, although the warming appears less pronounced than at the surface.  Temperatures of -32 °C or lower at 850 mb have become rare in the past decade or so, just like -50 °F temperatures at the surface.  From a first glance, then, it seems that warming aloft explains at least a significant part of the dwindling of extreme cold frequency in Fairbanks.

Looking at the December-February mean conditions, temperatures at 850 mb have increased substantially, and only modestly less than at the surface:

As a final note, and as food for thought, the surface and upper-air data from McGrath show broadly similar trends, although the drop-off in extremely cold days is less pronounced at the surface than for Fairbanks (especially for -50 °F and below); see charts below.  Note that I used different 850 mb temperature thresholds to correspond to the long-term frequencies of the respective categories.  As an aside, it is also interesting that McGrath has a higher frequency of very cold days than Fairbanks (much higher in the modern era) despite being warmer in the mean, both at the surface and aloft. 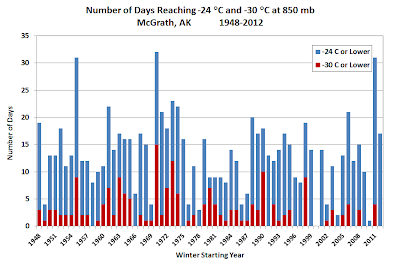 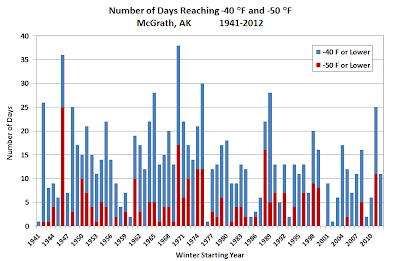 Here are the 30-year counts and DJF means:

Update: here's the McGrath 850 mb chart for the same temperature thresholds as Fairbanks: 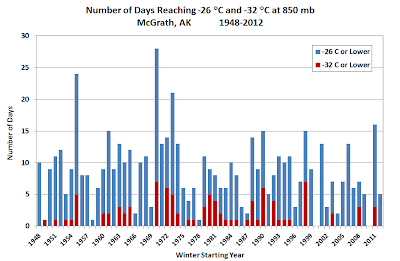 Posted by Richard James at 5:42 AM