Fairbanks briefly experienced above-freezing temperatures at the airport on Friday afternoon for the first time since November 14, and even warmer conditions were observed in favored locations in the southern interior of Alaska.  An interesting aspect of the event in Fairbanks is that the valley-level wind was out of the north or northeast throughout the warming.  Of course, the warm air mass was coming from the south, as winds were out of the south less than 1500 m above ground, but the wind aloft was not particularly strong and did not mix down to the surface.  In this sense, I'm not sure whether it's right to call this a "chinook" event in Fairbanks.

The chart below shows the hourly observations of temperature and wind speed and direction at the airport, along with the twice-daily measurements of temperature at 850 mb.  Temperatures rose in tandem with the low-level northerly wind speed, but as soon as the wind died away, the temperature dropped back to its former level. 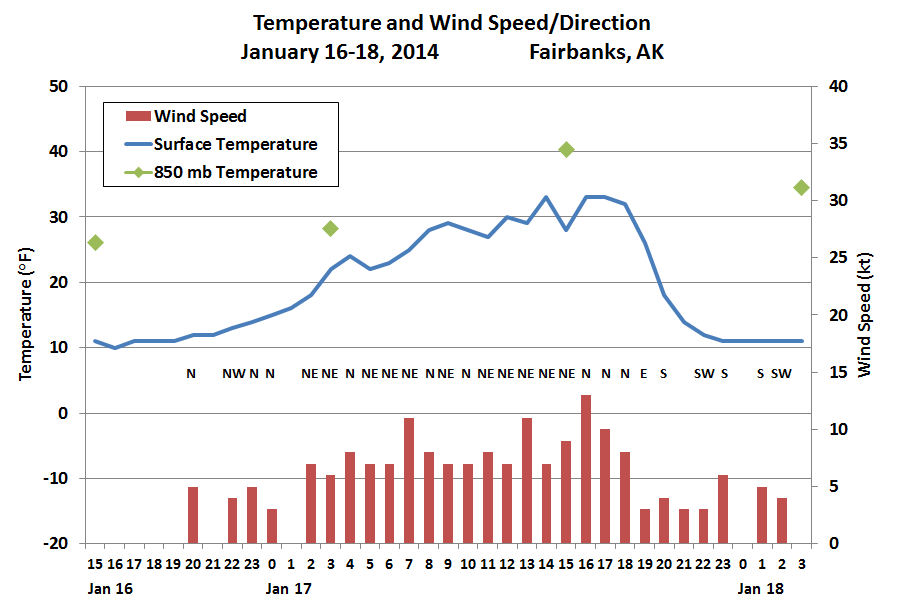 Surface observations from across Alaska at the peak of the warmth in Fairbanks show an impressive temperature gradient both across the entire state and in the central interior, as temperatures remained much cooler to the north and west of Fairbanks.