In a continued quest to fully understand the long-term decline in extremely cold days in Fairbanks (see previous posts here and here), I decided to look at historical visibility observations to see whether any notable changes have taken place in tandem with the warming that has been observed.  Part of the motivation here is that I have long entertained a hypothesis that increased human emissions of water vapor on extremely cold days might be allowing ice fog to form more frequently and at higher temperatures than in earlier years, and that this could slow or prevent the drop of temperatures to extremely low levels (from latent heat release or changes to the radiation balance).  I came across this idea in a blog post by Haines, AK resident Jim Green a couple of years ago:

An initial examination of the data fails to support the hypothesis, because it appears that low visibility conditions have actually become less common in Fairbanks over the years.  The chart below shows the annual (seasonal) fraction of hourly observations in December through February for which the visibility was 1/4 mile or less (red columns), 1/2 mile or less (blue columns), and 1 mile or less (green columns); the purple line is the 15-year trailing average of the 1/2 mile or less frequency.  There was a rather pronounced increase in low visibility conditions from the late 1960s to the mid 1980s, but in recent decades there has been an overall slow decline in the frequency of fog conditions. 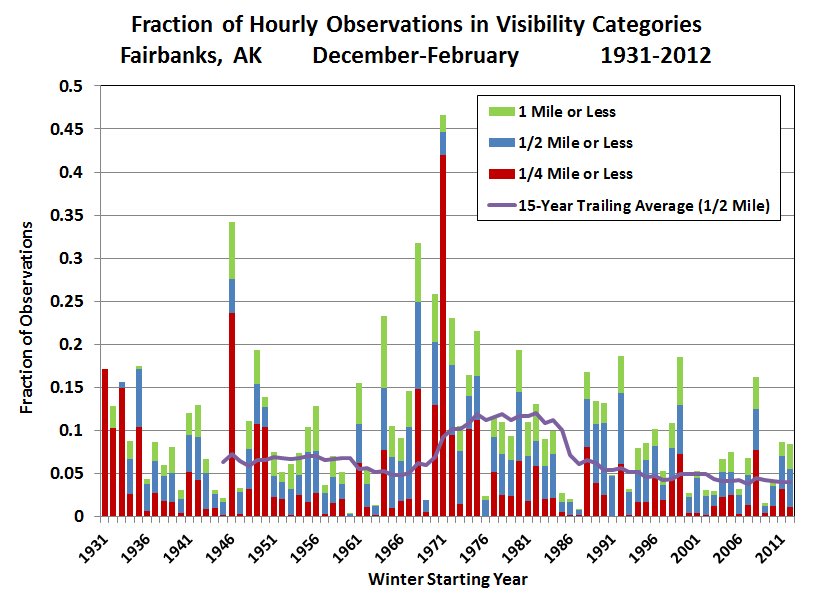 Since I looked at McGrath in the previous post, and Jim Green's article made a point of comparing between McGrath and Fairbanks, below is the corresponding chart for McGrath (no hourly observations prior to 1948). Note that the vertical scale is much different from the Fairbanks chart, because low visibility is much less common in McGrath in winter.  McGrath also shows a decline in frequency of 1/2 mile or less visibility in recent years, with the 15-year average of 1/2 mile frequency reaching its lowest level in the past few years. 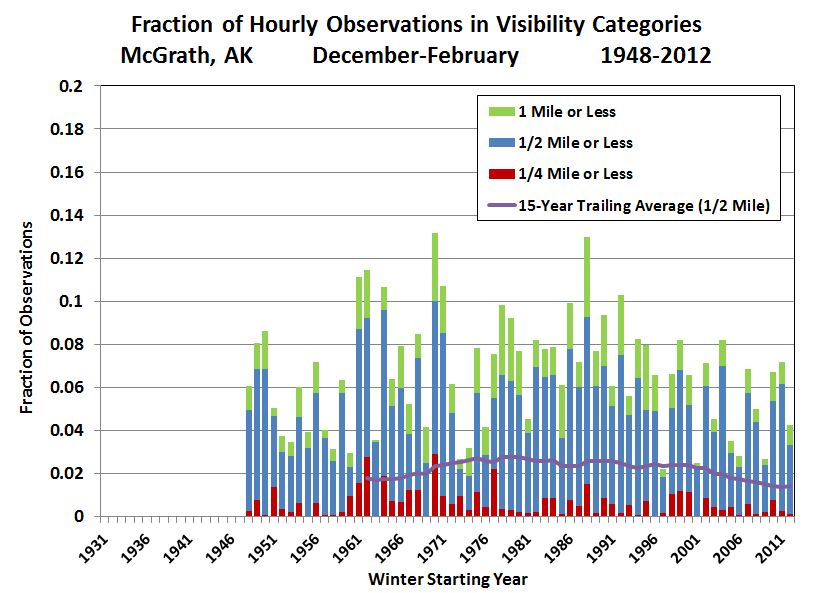 The following histograms illustrate the multi-decadal changes in the winter frequency distribution for visibility at both locations.  In Fairbanks, the frequency of sub-1 mile visibility dropped from 9.3% to 5.8% between 1951-1980 and 1981-2010, while in McGrath the rare cases of less than 1/2 mile visibility became even less common. 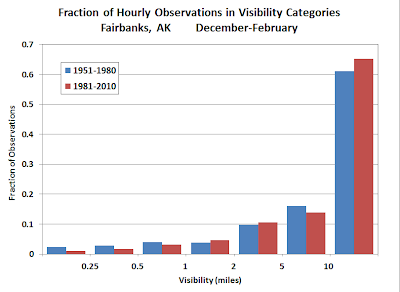 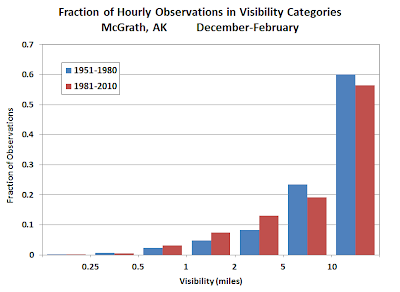 Assuming that the historical data are reliable, then, it seems clear that low visibility conditions have become less common in Fairbanks in winter.  This rules out the basic initial hypothesis, but still leaves the question of whether fog frequency has become more or less common at comparable (low) temperatures.  In other words, we know that ice fog is a common occurrence when temperatures dip to very low levels, and we know that long-term warming has occurred; so do we still see as much fog at the same temperatures (e.g. -40°), or is fog less common even at the same temperatures?  To answer this we need to look at the joint distribution of temperature and visibility.

The next two histograms show the visibility distribution for only temperatures between -50 °F and -40 °F inclusive.  We see that there has been a modest increase in the lowest visibility (less than 1/4 mile) category for Fairbanks at these cold temperatures, and a slight decrease in the 2-5 mile category, but overall the distribution has not changed a great deal.  The changes are actually more dramatic at McGrath, where visibility less than 1/2 mile has all but disappeared in recent decades under these cold conditions. 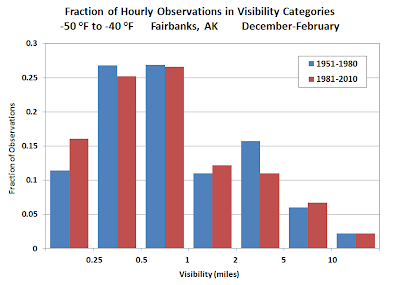 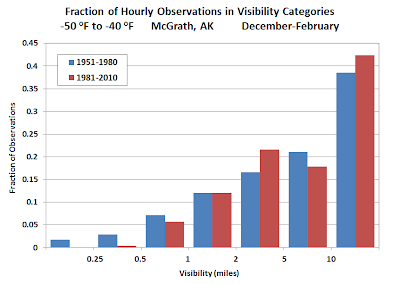 The next chart shows how the mean visibility varied with temperature for the two locations and in the two 30-year periods (red and blue for Fairbanks, purple and green for McGrath).  [Update: note that an earlier version of this chart failed to account for the change to automated visibility measurements, which do not report values greater than 10 miles; so I have updated the chart to show mean visibility after truncating all values to 10 miles.]  Again we see that the Fairbanks visibility distribution is not greatly different between the two periods; there is a modest decrease at the lowest temperatures but an increase between -40°F and -25 °F. 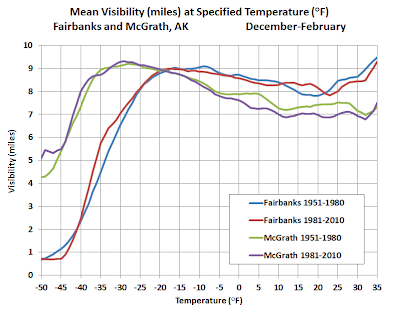 Given that visibility and temperature are still related in much the same way at Fairbanks, it seems we can conclude that the decline in low visibility conditions is largely attributable to the declining frequency of very cold conditions; ice fog is not as common as it used to be, because it's not as cold as it used to be.  However, in McGrath there has been an interesting decrease in the frequency of ice fog that can't be explained by the warming trend.

In relation to the initial hypothesis for Fairbanks warming, there seems to be no evidence that changes in fog frequency have contributed to the pronounced lack of extremely cold temperatures in recent decades.

Finally, for those who find this as interesting as I do, I'll include a couple more charts I made during the investigation; these show the temperature at which 1/2 mile or less visibility was observed, for both sites and both periods.  Fog in winter in Fairbanks is observed mostly but not exclusively at very low temperatures, but in McGrath it occurs mostly at relatively high temperatures associated with frontal zones and mixing of contrasting air masses.  Both locations have seen a sharp drop in the proportion of low visibility events at very low temperatures: fog is now more often associated with warm conditions than it used to be. 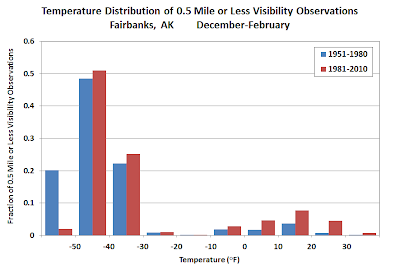 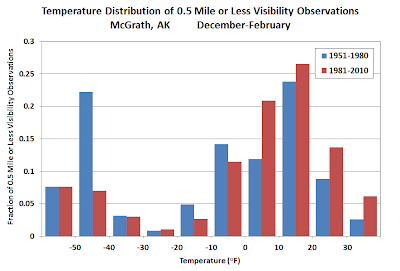 Posted by Richard James at 5:40 AM