I've been very busy lately with several research projects having varying degrees of relevance to Alaska, but came across some results that may be of interest to some here.  We recently discussed the influence of El Niño on Alaska winter climate, and the maps below give additional insight on this topic.  The 4-panel figure below (click to enlarge) shows the following: 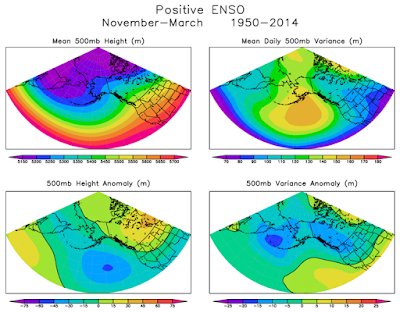 The bottom left panel shows that El Niño winters tend to bring below-normal heights (troughing) over the Bering Sea, Aleutians, and northeast Pacific, and above-normal heights over Canada.  This is a relatively stable pattern as far as Alaska is concerned, as the variance is lower than normal from the Bering Sea across Alaska to western Canada.

The La Niña patterns are opposite in some respects, as we would expect - see below.  The climatologically favored trough over the Bering Sea is greatly weakened and heights tend to be above normal, especially over and south of the Aleutians.  Also, the variance is enhanced over the north Pacific and Alaska, and especially over the southern Bering Sea and Aleutian chain.  This means that the flow pattern is unstable and flips around more than normal. 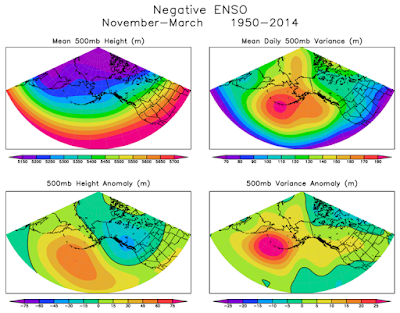 The difference between El Niño and La Niña winters is greatest near the southernmost Aleutian islands around the date line.  Consequently I pulled out the daily height anomalies at 50°N 180°W and plotted the frequency distribution during the top 10 El Niño and La Niña winters - see below.  It's very interesting to see that even though the mean 500mb height is above normal in La Niña winters, the most common occurrence is for the height to be below normal.  In other words, the distribution is highly skewed; it's also positively skewed for El Niño.  This is something I did not expect. 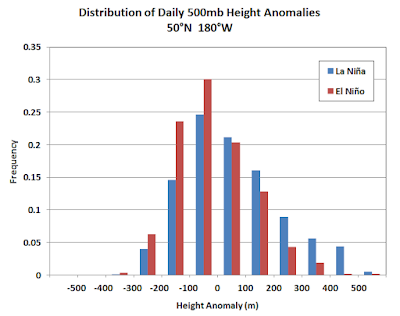 In terms of impacts on Alaska, a key feature is the elevated frequency of very high heights during La Niña winters; this means that strong upper-level ridging (blocking) is much more common over the Bering Sea during La Niña, and it is these events that bring unusual cold to much of Alaska.

Below are corresponding maps for the top and bottom 10 PDO winters since 1950.  There's much that could be said here, but I'll just point out that the positive PDO phase amplifies the ridge over western Canada much more than El Niño does, and that is why the positive PDO is more reliably connected to warm winter conditions in interior Alaska. 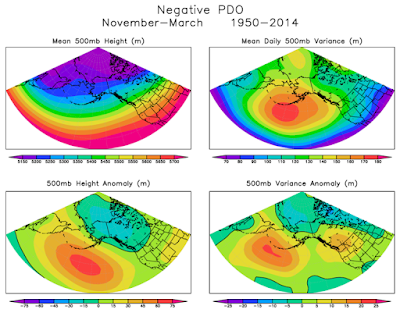 Posted by Richard James at 5:57 AM