The highly unusual September weather continues in Fairbanks, with a Winter Storm Warning now in effect for another round of snow, and potentially even heavier than Friday's dump.  The latest forecast calls for 6-12", which is really amazing for the time of year.

It probably goes without saying that the upper-level flow pattern associated with this storm is very unusual, but it's worth pointing out one aspect that seems particularly strange: heavy snow is expected in Fairbanks with a strong southerly flow aloft.  Assuming the snowfall pans out as expected, this is indeed rare.  Looking at historical data from 1948, I found 58 distinct heavy snowfall events that brought 8" or more of snowfall in association with 500 mb wind speeds of at least 30 knots on any of the surrounding days.  Only 3 of these events saw 30+ knot winds from a direction between 90° and 200° (i.e. easterly to just west of southerly): November 19-20, 1964, December 18-19, 1968, and October 16-17, 1974.  Southerly winds aloft typically bring strong down-sloping to the central interior of Alaska, which is very unfavorable for precipitation.  It will certainly be interesting to see if the computer models are correct in suggesting that it's different this time.

The series of maps below shows the predicted 500 mb height and wind fields at 12-hour increments beginning at 3pm today and ending at 3am on Wednesday.  The potent trough is already swinging down across western Alaska and will cut off south of the Kenai Peninsula, then pull northwards.

The 850 mb forecast shows colder air working its way in aloft tonight and becoming easily cold enough for snow in Fairbanks.  A striking frontal zone sets up across the eastern interior by tomorrow afternoon.

The sequence of 12-hourly precipitation accumulation maps clearly shows the zone of substantial snowfall associated with the frontal zone stretching northeast from the Kenai Peninsula to northeast Alaska.  It will certainly be interesting to see how this one plays out.

Update September 29: here's the 3am AKST 250 mb analysis from today.  The densely stippled areas show the highest jet speeds.  The right-entrance region and the left-exit region of the jet maxima are both favorable for deep tropospheric ascent; this zone extends from about Valdez to Fairbanks in this analysis. 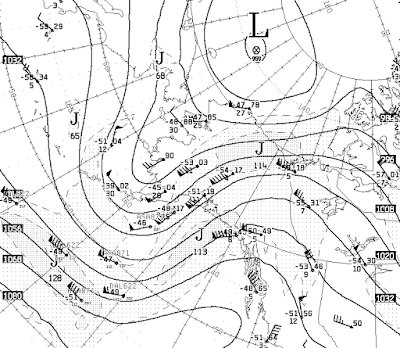