More to come on this event, but yesterday's official snowfall of 11.2" in Fairbanks is the greatest calendar day snowfall on record for September (1930-present); the previous record was 7.8" on September 13, 1992.  The storm total of 11.9" (through midnight last night) is the second greatest, as the mid-September event of 1992 brought 17.4" over 5 days. 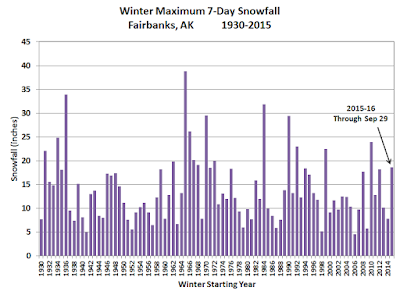 As my post the other day illustrated, this depth of snow has never melted off completely before spring.  However, the forecast looks very warm, and so it seems the odds still favor the reappearance of bare ground before the permanent snow cover is established in Fairbanks.

Here's a loop of infrared satellite images showing the evolution of the deep cloud cover during the period of heaviest snowfall in Fairbanks yesterday.  Blue colors show cold, high cloud tops, and orange indicates a warm ocean or land surface; note the warmth in the Yukon Territory (it was 66°F in Carmacks).

Posted by Richard James at 6:30 AM