With valley-level snow in the forecast for tomorrow, it appears that a more wintry scene is about to descend on Fairbanks.  If the forecast verifies, this first measurable snow of the season will be about a week early compared to normal.  Two years ago the first snow fell on the 18th, but all other years in the past decade have seen snow arrive at a later date.

So far this month, Fairbanks is slightly more than half a standard deviation below normal in terms of average daily mean temperature (through the 23rd).  September 2013 was a little cooler through this date, but ended only 0.4 SD below normal, and every other September since 2005 has been warmer than normal.  This makes September the most persistently warm month of the year in the last decade (in Fairbanks, and compared to normal of course).

I thought it would be interesting to look at the global sea surface temperature (SST) patterns that most often precede cool Septembers in Fairbanks.  To do this, I took the 10 coolest Septembers since 1950 and calculated the frequency of above-normal SSTs in the preceding August at each grid point, using the ERSSTv4 data set.  See the results below. 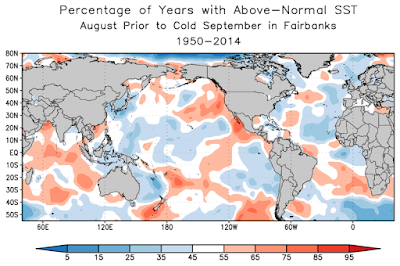 Cool Septembers tend to be preceded by warmer than average waters over the eastern North Pacific.  The reverse analysis for the 10 warmest Septembers, shown below, indicates that - counterintuitively - a cool eastern Pacific is more favorable for a warm September in Fairbanks.  Other regions where the SST patterns are generally opposite between cool and warm Septembers are in the western subtropical Pacific (southwest of Hawaii) and in the eastern North Atlantic, where August SSTs seem to be positively correlated with September temperatures in Fairbanks. 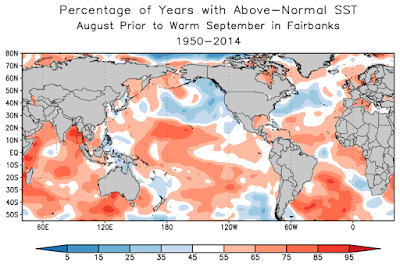 The SST analysis from this August (below) shows tremendously widespread warmth in the eastern tropical and North Pacific.  The warm conditions from the Gulf of Alaska to Baja California are certainly more closely aligned with the pattern that favors a cool September, which matches what we are seeing this month. 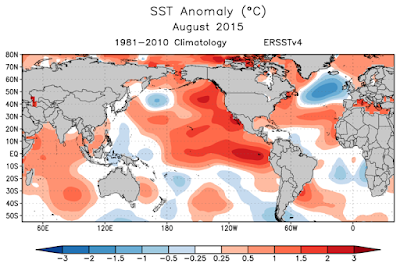 NOAA's Climate Prediction Center, taking into account many different predictors, expected a higher likelihood of a warm September (see below, top left panel).  In view of the warm waters surrounding Alaska, it would have been difficult to anticipate a cool month, but the SST analysis above seems to provide a hint that perhaps unusual warmth was not as likely as we might have thought.