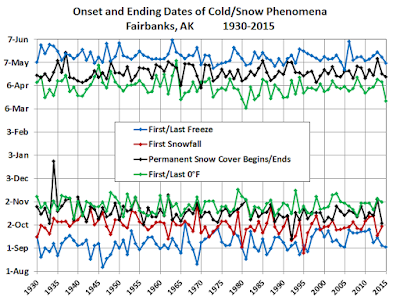 A couple of interesting features stand out:

- The first freeze has become considerably later over time (no August freeze since 1996), but the first measurable snowfall has become earlier, and the establishment of the permanent winter snow cover has also become slightly earlier.  Prior to about 1970 there was usually a lengthy period between the arrival of frost and the arrival of snow, but these days the transition is relatively compressed.  The slightly earlier arrival of snow cover is consistent with a long-term cooling trend in Fairbanks in autumn: most of October and early November have become colder since 1930 (in contrast to the rest of the year).

- Late winter and spring have become warmer over time, with fewer instances of late freezes and late 0°F occurrences, but it does not appear that the melt-out date has become earlier.  Consequently the continuously snow-covered season has become slightly longer.

Posted by Richard James at 4:58 AM