Incessant rain has melted off yesterday's 4" of snow from Keystone Ridge, but other more northerly locations are looking wintry today, including Arctic Village and the central Brooks Range above about 2000'.  Based on the forecast, it seems this may be the permanent winter snow cover at middle to upper elevations of the Brooks Range; but presumably that is not particularly unusual.  Here are a few webcam shots from earlier today. 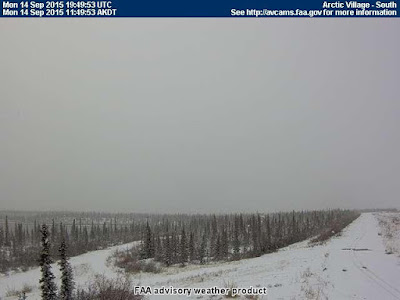 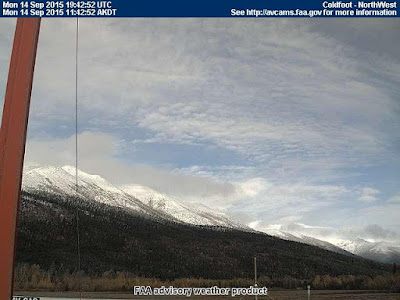 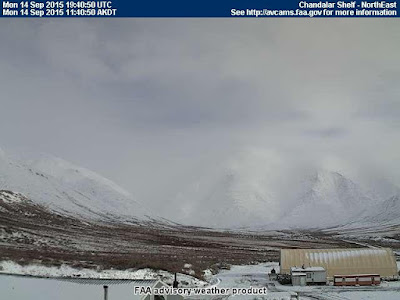 The medium-range forecast is showing a fresh dose of cold air moving into northern and interior Alaska over the weekend, so it appears the cool spell will persist.  The models have steadily trended colder in the past several days, so it will be interesting to see just how chilly it gets.  Here's an example of how the models have trended colder: the chart below shows the forecast 850mb temperature for a grid point near Fairbanks, from the last 4 runs of the ECMWF deterministic model.  The earliest run (Saturday afternoon's run) is in blue and the most recent (this morning's) is in purple.  To put this in perspective, the normal 850mb  temperature at Fairbanks drops below 0°C on the 20th.  In 1992, the 850mb temperature reached -11°C on the 10th, -12°C on the 15th, and -14°C on the 22nd. 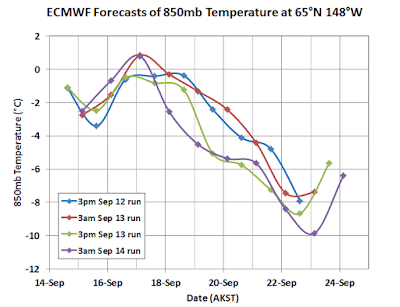