Many readers will recall that the Sagavanirktok River underwent severe flooding last spring, causing a lengthy closure of northern stretches of the Dalton Highway.  A recent media report described efforts to raise portions of the highway during the past several months, using more than a million tons of gravel, in the hope that future flooding may prove less damaging.  On this blog I suggested that high precipitation in the previous year (2014) was partly responsible for the massive overflow flooding, and so I thought it would be interesting to look at how this year's precipitation compared to 2014.

The chart below shows an update of the chart I showed before, consisting of annual (water year, October through September) precipitation totals at 3 SNOTEL sites along the Dalton Highway.  The Sagwon site is located about halfway between Imnaviat and Prudhoe Bay, as seen in the map below.  It's clear that the year ending September 30, 2015 was slightly less wet than the previous year, and was not particularly unusual at either Imnaviat Creek or Prudhoe Bay.  However, it was wetter than normal again at Sagwon, and the 3-year running mean precipitation is higher than at any previous time. 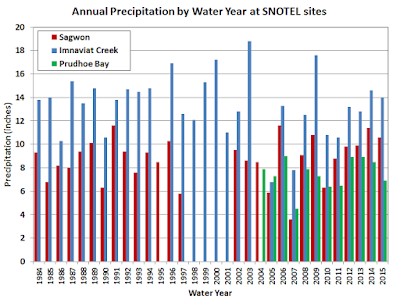 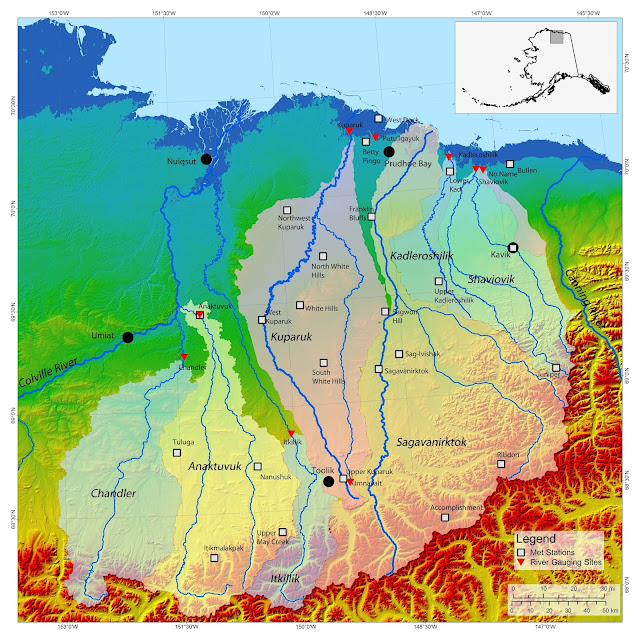 The accumulation of precipitation through the warm season at Sagwon was quite similar this year to last year; there was a notable wet spell around the beginning of June, and then a substantial rainfall surplus accrued by the end of summer (see below). 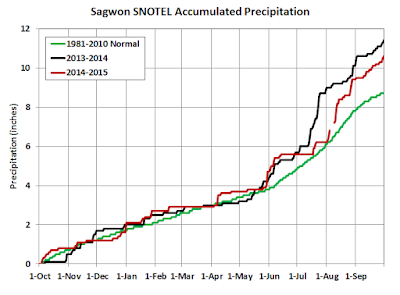 It's interesting to compare the 2014 and 2015 streamflow measurements from the Sag River streamflow gage near Pump Station #3 (see below, 2014 on top, 2015 below).  After the initial high discharge in late spring 2015, this year's flow was substantially lower, with no peaks above 10000 cfs during the summer months.  The August rains produced a notable flow spike, but then the flow dropped back to near 1000 cfs in late September when the station stopped reporting.  The 3rd chart below, which zooms in on August and September this year, and includes a long-term normal, indicates that the flow was close to normal by the end of the season.  However, the rapid flow reduction in mid to late September probably also reflects the unusually cold conditions that occurred then; it seems likely that groundwater levels remain above average. 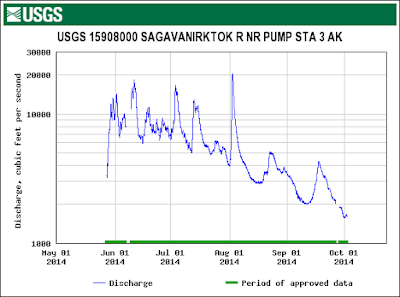 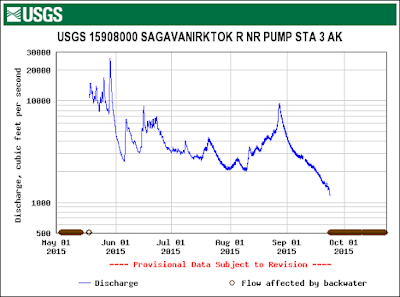 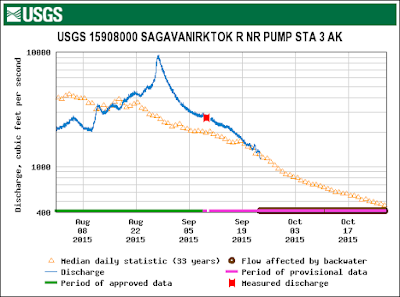 In conclusion, it appears that wet conditions continued in summer 2015 along the mid-Sag River, leading to above-normal river discharge in the latter part of the season.  Although the anomalies were less extreme than in 2014, it seems quite possible that prevailing high groundwater levels may lead to more flooding problems next year.