The recent wet September prompted me to look again at long-term precipitation trends in Fairbanks, especially in light of the hypothesis that increasing precipitation could be responsible for the trend towards earlier autumn snowfall.  In a post earlier this year, I showed that Fairbanks has become slightly drier over time (1930-present), but the only calendar month with a statistically significant trend is August, which has become drier at the 99% level of significance.

To look more closely at the variation in trends through the year, I calculated 30-day running precipitation totals and obtained a linear trend (1930-2014) for each day of the year.  I did this both for the actual precipitation amounts and also for the ranks of the values within the 85-year distribution.  The reason for this is that a single outlier year could throw off the least-squares trend calculation for the raw precipitation amounts, but the ranks won't suffer from this problem.  The chart below shows the results. 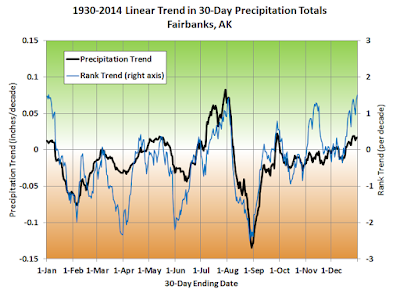 We see that most of the year (about 70% of it) has become drier over the 85-year history, regardless of whether we use the precipitation values or ranks.  The drying trend in August is very noticeable, as is a trend towards wetter conditions in July.  The rank trends show some other interesting peaks and troughs at various times of the year, some of which are no doubt caused by random sampling variability.

It's interesting to note that most of the autumn has become slightly drier, so the slight moistening trend in the month of September is an anomaly for the season as a whole.  The chart below shows the September precipitation totals since 1930.  We see that the early years (about 1930-1960) were relatively wet, then there was a drier spell in the 1960s and 1970s, and it has been wetter again since about 1990.  Thus when reader Gary comments that "late August to late September used to be the Golden Month", he might be recalling the drier decades in the middle part of the history.  The overall trend over the entire period is quite small, although it's definitely positive; note how few Septembers have been very dry in recent decades. 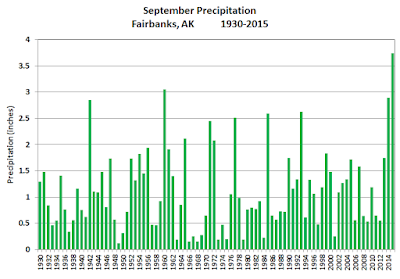 The chart below shows the number of days each September with daily precipitation amounts at or above 3 different thresholds.  As I noted in the earlier post, the frequency of 0.25" daily precipitation has increased quite a bit since 1990.  Smaller precipitation amounts have actually become slightly less common over time.  It's interesting to note that in the first 30 years (1930-1959), only 9% of September precipitation days produced 0.25" or more, whereas in the past 26 years (1990-2015), this ratio is up to 17%.  Changing Pacific sea surface temperature patterns almost certainly bear some of the blame for this, but an examination of the details will have to wait for another time. 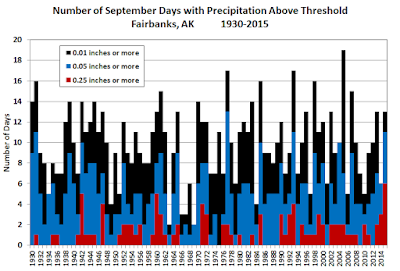