The total liquid-equivalent precipitation in September in Fairbanks was 3.74", which is the greatest amount on record since 1925, when 5.61" fell in September.  Normally I only look at historical station data since 1930, the beginning of the Weather Bureau era (when data quality became much better), but in this case the 1925 record seems indisputable and is worthy of mention.

Below is a copy of the September 1925 observations from the University Experiment Station in Fairbanks.  A remarkable 4.16" of rain fell in one week in mid-September, including more than 1" on two separate days.  Since 1930, the highest weekly precipitation amount for dates entirely within September is 2.24", which occurred just a few days ago and also last year from September 1-7.  So the event in 1925 was quite an extreme outlier. 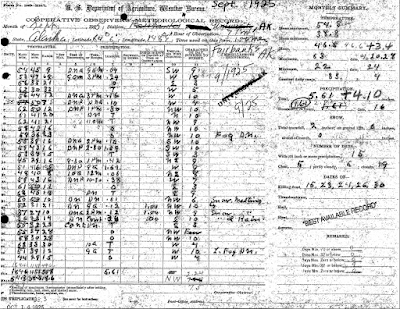 In attempting to confirm the veracity of the 1925 data, I looked at the 20th Century Reanalysis, which is a model estimate of historical atmospheric conditions based solely on observed sea-level pressure and sea surface temperature patterns.  The reanalysis model "predicts" historical precipitation, so if the reanalysis shows a significant precipitation signal on the same dates as the claimed Fairbanks rainfall, this provides good evidence that the event really happened.

The maps below show the daily mean precipitation rate estimated by the model from September 12-17, in units of mm/s, so a value of 0.0002 (the upper end of the color scale) is equivalent to 0.68" per day.  The reanalysis shows a rather pronounced precipitation signal over the interior on the 13th-14th and again on the 16th, which lines up nicely with the Fairbanks observational record.  I'm actually impressed that the historical reanalysis, based only on sparse pressure and sea surface temperature data, is able to reproduce the event; the 20th Century Reanalysis is a really nice scientific accomplishment.

As an aside, while looking at record wet months in the history of Fairbanks, I noticed that 5 of the 12 calendar months have set precipitation records (based on the 1930-present period) since 2002: these are listed below.  The probability of this happening by random chance is only 3.3%, which indicates that the change to wetter conditions (by this metric) is statistically significant.

Three of the other months (January, August, and October) set their records in the 1930s, which was a volatile time for Alaska climate, as we've noted before.