The absence of cold in Fairbanks this month is becoming unusual, with 19°F being the lowest temperature observed so far at the airport.  It was almost as cold last month prior to the first big snow.  In some years it is far colder by this date in October, with the median lowest temperature as of October 21 being +6°F.  In over a quarter of years (although only once since 2000) it has dropped below 0°F by this date.  In 1935, Fairbanks recorded a remarkable -27°F on October 25.

The range of possibilities for winter-to-date lowest temperature led me to wonder how this distribution varies over time, so of course I created a chart to address the issue - see below.  The range between lowest season-to-date minimum and highest season-to-date minimum expands rapidly in October, as some years see an early arrival of winter, but other years see an extension of autumn.  Two years ago the lack of cold was even more unusual in October, with the first sub-20°F reading not showing up until October 26.  That was of course also the most snowless October on record.  Recall how dramatically the temperatures dropped off in November 2013, however. 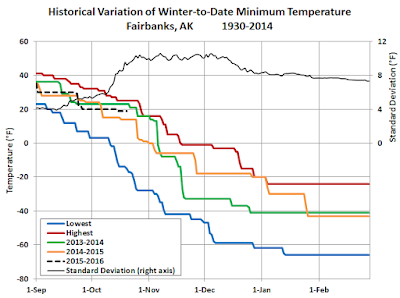 The thin black line on the chart shows the standard deviation of the 85-year distribution for each day.  We see that the variance stays high from late October through early December; however, it drops off a bit in middle and late winter, because even relatively warm winters usually see some kind of cold spell.

On a related note, Fairbanks has yet to see a high temperature at or below freezing, which is also becoming very unusual.  The latest date for a high temperature of 32°F or below is October 27, 1938.  Based on the NWS forecast, there's a chance this record could be broken, although tomorrow may preclude this as it seems likely to be rather cloudy and therefore a bit cooler in the afternoon.