The fortunes of snow have reversed again in Fairbanks, as mild temperatures and rain have already eradicated much of the snow cover that was so dramatically laid down last week; the snow depth at the airport was reported as down to a trace last night.  So the early-season snow cover has melted out twice already.  In and of itself, this is quite unusual: in more than 50% of years (most recently last year), the initial snow cover (based on daily snow depth) never melts out until spring.  In 27% of years it melts out once before becoming permanently established, in 18% of years it melts out twice, and in 2 of 85 years (1936 and 1970) it melted out 3 times.  The record was in 1934, when all-time record temperatures for December melted out a meager snowpack on December 5, and the permanent snowpack didn't arrive until the day after Christmas, after 4 false starts.

This year's events are of course more unusual with respect to the amount of snow that has come and gone.  A total of 20.9" has accumulated and melted, which is more than ever before prior to the snowpack; the previous record was in 1934 (14.9").

On a related note, Brian created a very interesting chart the other day showing the annual snowfall that does not contribute to the permanent snowpack in Fairbanks, i.e. the amount that falls and melts out before the snowpack arrives, plus any snow that falls after the initial spring melt-out.  On average this amount is only 2.6", and an average winter sees 96% of its snowfall contribute to the permanent snowpack.  The chart below shows the annual fraction of snow falling outside the snowpack dates, with the record being 41% in 1940-41.  Interestingly the winter of 1940-41 had a very strongly positive PDO and a strong El Niño. 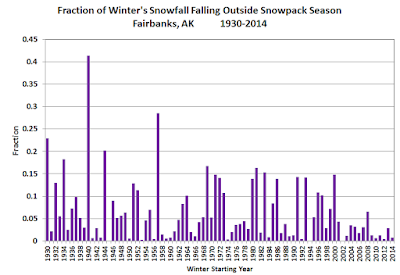 It's interesting to see that there appears to be a long-term trend towards less snow outside the snowpack season, with the last decade being quite unusual compared to the long-term history.  This could be related to the long-term cooling trend at this time of year in Fairbanks, i.e. lower temperatures make a melt-out less likely, but I suspect it's more attributable to increased precipitation: a heavier early snowfall is less likely to disappear.  There has also been a decrease in spring snowfall, with a strong warming trend.  In any case, the trend on this chart will look a lot different when this winter's data point is added: the fraction for 2015-16 might be anywhere from 14% to 91%, based on the historical range of annual snowfall.

By way of comparison, note that Bettles sees only 1.4" of snow outside of the snowpack season, and on average over 98% of annual snowfall contributes to the snowpack.  The record non-snowpack snowfall was 16.3" (18% of total) in 2013-2014.  In McGrath, the record is 20.2" (25% of total).  The fact that Fairbanks has already seen more snow than this illustrates how very unusual the situation has been compared to the long-term climate of the interior.

Posted by Richard James at 9:24 AM

Email ThisBlogThis!Share to TwitterShare to FacebookShare to Pinterest
Labels: Snowpack