Some weeks ago reader Tracy asked whether mean annual snowfall has increased over time in the interior.  I've been remiss in not addressing this more quickly.  Looking first at Fairbanks (see below), the annual (July to June) snowfall totals are of course enormously variable, which makes it difficult to say whether the data reflect an overall long-term trend.  However, it's clear that snowfall has been on the low side in the past couple of decades, with few winters having more than 60" of snow, and the 10-year running mean has dropped back substantially from where it was in the 1990s.  It seems safe to say that the long-term trend towards earlier first snow and earlier arrival of the winter snowpack is not associated with an overall increase in winter snowfall. 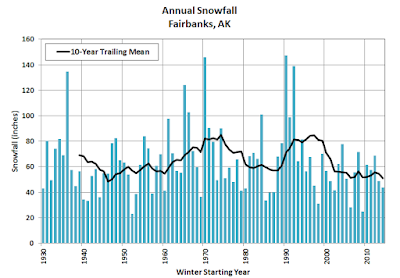 If we break the annual snowfall totals into early winter (October-December) and mid-late winter (January-March), we see that the snowfall decrease in recent years is somewhat more pronounced in the first half of winter (see below); or perhaps we should say that the snowy winters of about 1965-1995 were mainly caused by increased snowfall in early winter.  The early winter snowfall since about 1995 has been commensurate with the climate of the 1930s, 40s, and 50s.  It's curious to note here that the Atlantic Multidecadal Oscillation (AMO) changed from positive to negative in the mid-1960s and then switched back to positive in 1995 - could this be more than a coincidence?  This will be a topic for future investigation. 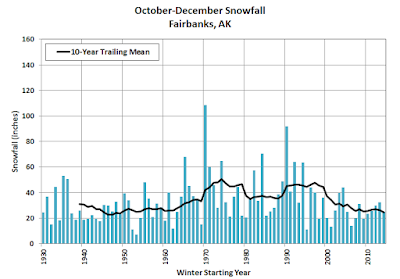 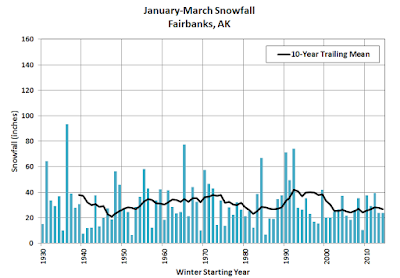 Compared to the early winter snowfall, the January-March snow totals have less decadal and multi-decadal variability, although the annual variance is about the same.  Another way of looking at this is that January-March snowfall seems to vary almost randomly from year to year, whereas consecutive October-December snowfall totals have a small autocorrelation and thus a tendency to remain on one side or the other of normal.  Obviously we are in a "low early winter snow" regime at present.  Admittedly we don't have a long enough history to say if these conclusions are robust, but it's an interesting aspect of the data that we do have.

Time doesn't permit a detailed examination of other interior locations, but a quick look at McGrath and Bettles indicates some notable differences from Fairbanks.  McGrath has seen some very low snow years recently, but other winters have been snowy; the variance has become higher, as we saw here.  In Bettles there has been less of a decrease in recent years and the 60+ year trend is up.  Note that both Bettles and McGrath have less interannual variability in snow totals than Fairbanks; the standard deviation of annual amounts is 32-33% of the mean in Bettles and McGrath, but it's 41% in Fairbanks (for 1951-2014, the period of overlapping data). 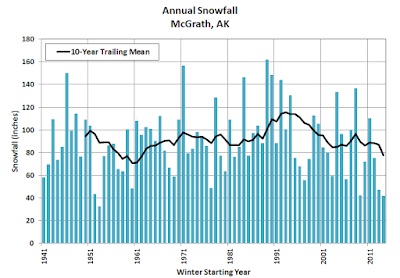 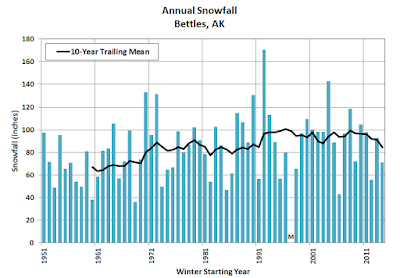