In the recent event, despite southerly flow in the middle troposphere, widespread deep ascent was generated by intense synoptic-scale forcing across the eastern interior.  The series of maps at the end of this post shows the evolution of the flow pattern at several levels and documents how the storm system evolved.

Looking at historical data from Fairbanks, it's clear that heavy snow events are much more commonly associated with upper-level winds from directions between southwest and northwest.  The chart below shows the wind vectors at 3pm AKST for each day since 1957 on which at least 6 inches of snow was observed.  Note that the markers show the direction the wind is coming from, so the wind vector points from the marker to the chart's origin.  Tuesday's event is represented by the only marker on the vertical axis (500mb wind from due south). Not only are winds more typically westerly during heavy snow events, wind speeds tend to be higher than they were on Tuesday, often 50 knots or higher at 500mb. 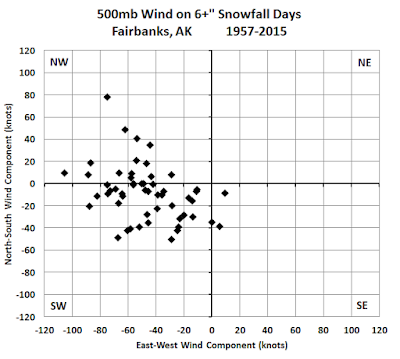 The next two charts show corresponding results for 700mb and 850mb winds.  There's a nice clustering of wind vectors from a direction just south of west, with quite substantial velocity.  On Tuesday afternoon the 700mb wind was almost calm (3 knots from 130°) and the 850mb wind was a light 7 knots from the northwest. 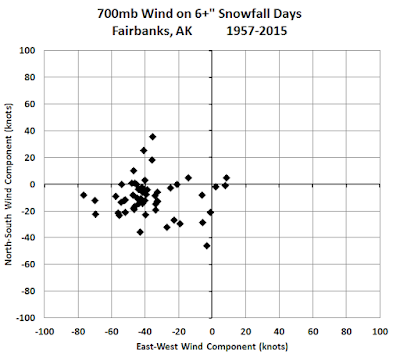 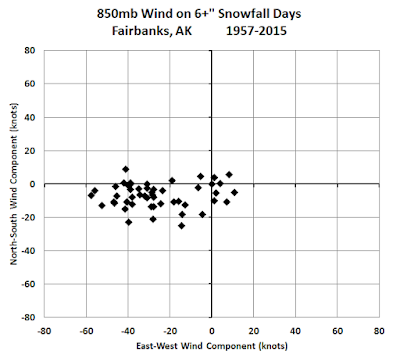 The 500mb chart above showed two historical snow events with an easterly component to the flow; the reanalysis 500mb maps for these events are shown below, along with the recent event (third map).  The October 1963 and November 1996 events look rather similar to the most recent one, with a strong trough over western Alaska.

Below are the Fairbanks wind scatterplots for less substantial snow events with 3-5" in a calendar day.  The main difference seems to be that wind speeds aloft are usually less when snow amounts are smaller. 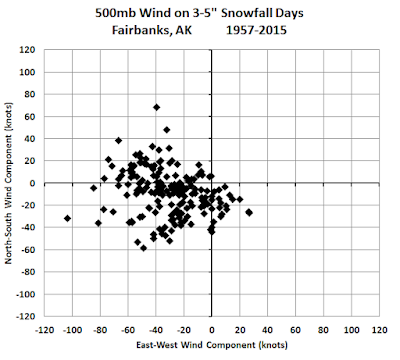 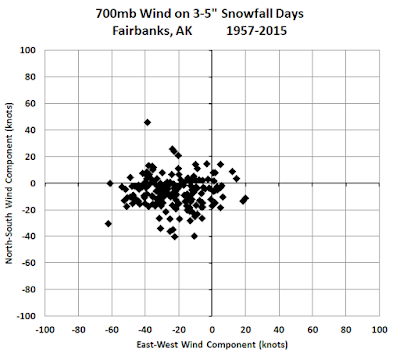 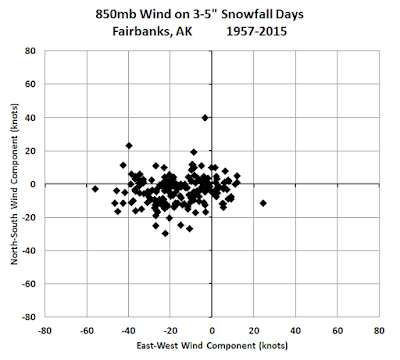 To document the recent event in more detail, here is a series of maps showing the pressure and wind patterns at several levels.  First, the MSLP evolution (times in AKST):

Next, the 500mb analyses: what a potent trough!

Here are the 250mb analyses:

And the 700mb maps; the stippling shows relative humidity - note the trough and high-humidity frontal zone over eastern Alaska on Tuesday afternoon.

Finally, the Wednesday afternoon 850mb analysis shows the extremely strong temperature gradient and frontal zone over the far eastern interior.  The dashed contours are at 5°C intervals and the 850mb temperature goes from +14°C in western Yukon to -6°C at Fairbanks.  The deep ascent that produced the snowfall was directly associated with the broad (and vertically tilted) zone of temperature contrast. 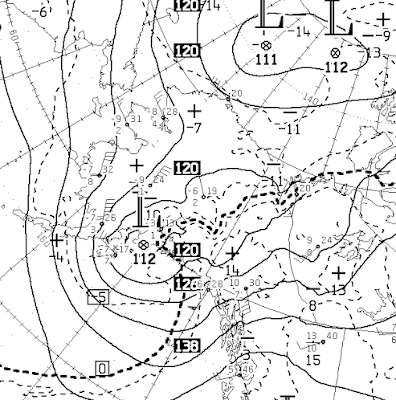 Posted by Richard James at 6:42 AM