The Four Faces of Summer

For an area better known for winter, it may seem odd, but Interior Alaska has four distinct phases of summer.Of course, these phases vary year to year, and not all summers have all four phases, but as a conceptual model it works pretty well.

1) The dry convective phase: late May-mid-June. This is the season of dry convection. Near-surface atmosphere moisture is limited and the mid-atmosphere is still cold, with low freezing levels. As a result, small hail is common in thunderstorms. Thunderstorms develop each afternoon unless there is substantial factors inhibiting their formations. It is the intensity and duration of this phase that determines the intensity of the fire season.

2) The moist convective phase: mid-June to mid-July. Similar to the first phase except that there is considerably more moisture available for convection and the mid-atmosphere is warmer. Much the heaviest rains from convection occur in this phase, with an inch of rain in one hour in extreme events. While lightning frequents peaks in this time, the fire starting is no more, and often less because of the higher rainfall amounts

3) Stratiform season: mid to late-July-mid-August. Thunder rapdily becomes much less frequent and not as widespread. Stratiform rains become much more common, and as a result of the increased cloud cover. daily high temperatures fall off much more quickly than low temperatures.

4) The Quiet Finish: mid-Aug-early September: Rainfall frequency drops and the rapidly decreasing solar heating and increasing darkness at night result in daily low temperatures starting to fall more rapidly. Thunder is quite rare. This phase often brings delightful weather, with comfortable days and cool nights. By Labor Day, with colors near peak autumnal brilliance, this can fade into a period of Indian Summer weather.
Posted by Rick at 12:12 PM No comments:

Here's a plot of daily lightning strike totals, through July 26th (top) in Alaska Fire Services Tanana Zone (bottom), which covers nearly all of Interior and northern Alaska. The collapse in daily strikes in mid-July is quite common. 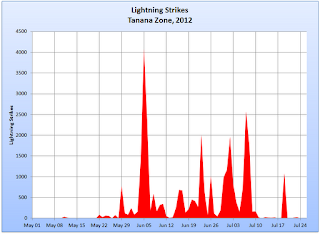