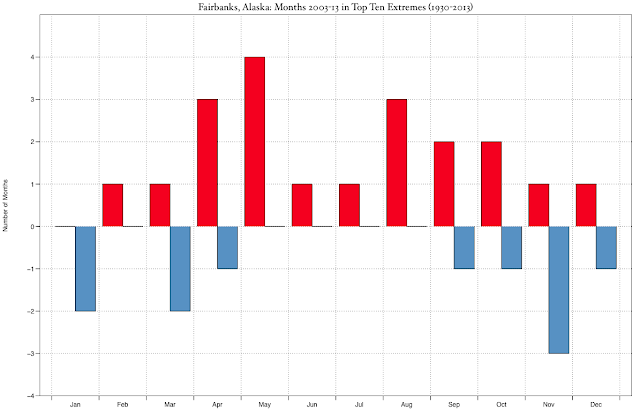 Updated with additional observations and faciods…

Temperatures dropped to near zero overnight. The low temperature at the Fairbanks Airport of +2ºF easily broke the previous record of 8 above set in 1924, and is among the coldest temperatures so late in the season (more below). Other low temperatures include:

Obviously the sustained cold  weather has kept break-up at bay. The photo from Pro Music Sunday morning, looking south across the Chena River, hardly even shows any frozen melt water on top of the ice.
Posted by Rick at 7:57 AM 6 comments: 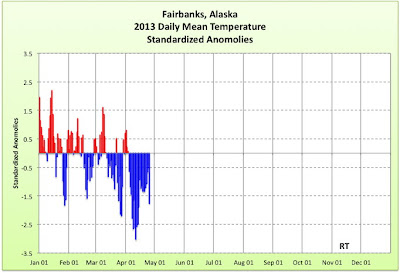 Here's the standardized daily mean temperature departures updated through Thursday. Fairbanks is definitely headed toward a top five coldest Aprils of record, and that's no surprise given all that blue on the chart. 19 days so far this month have been 1.0 or more standard deviations below normal, while only the first three days of the month were above average at all.
Posted by Rick at 6:03 AM No comments:

A Record Falls, Another Remains

The average daily temperature on Tuesday at Fairbanks was 32ºF, which means that 2013 is now the latest in the spring that Fairbanks has ever gone with zero accumulated thaw degree days.  The high Wednesday has been 39ºF (early morning right with the cold frontal passage), and the low through 7pm AKDT has been just 32ºF. However, it is possible that the temperature could get down to 25ºF by midnight, so the streak might continue.

Here's an update of temperatures through Saturday, April 20th.  In this plot, in addition to trying out new software, I've plotted the daily mean temperatures along with the 1981-2010 mean ± 0.43 standard deviations (the grey area). 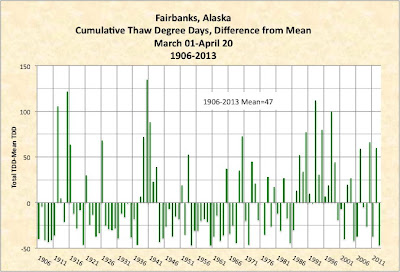 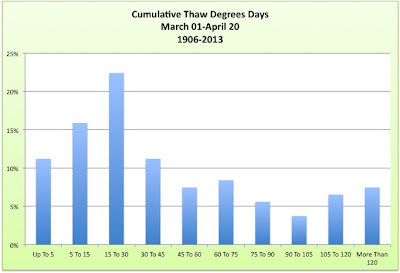 So having accumulated very few thaw degree days at this point is not unusual;  11 percent of springs have five or less through April 20th. So, while it is unusual not to have any significant snow melt thus far, it is well within the range of past experience. If Saturday's numerical weather models are vaguely correct, we'll start to accumulate those thaw degree days pretty quickly next week and with it snow pack ripening.
Posted by Rick at 11:45 AM 2 comments: 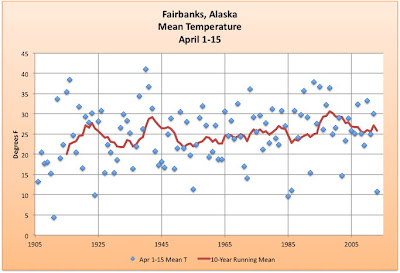 Here's a link to the NWS Alaska Region Facebook graphic showing how the cold weather this month is distributed across Alaska. Northwest and Southeast Alaska have not been notably cold but in between it sure has been.
Posted by Rick at 8:12 PM 3 comments: 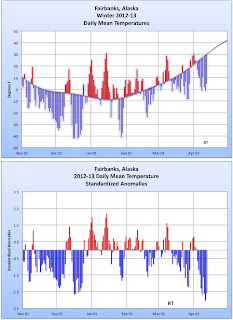 How did this happen: cold low aloft. Here's the mean 500mb heights for April 6-12:
There have been no upper air records set or even approached. Rather, it's the duration of the cold pattern that has produced the cold April week.

I'll be posting a wrap-up of the current cold snap this weekend, but in the meantime, it's worth noting that the low (through 6am) Thursday at the Fairbanks Airport has been -20F. This is the lowest temperature this late in the season since 1992, when the temperature fell to 23 below on April 13th. It's slightly colder in the usual places, with 24 below at Goldstream Creek and the Woodsmoke CWOP near North Pole.
Posted by Rick at 6:36 AM 4 comments:

I was talking with a colleague this past week about standardized anomalies as a way of grouping locations into broad climate regimes (e.g. the Alaska climate divisions work in Bieniek 2012).  A primary question is to what extant different elevations anomalies are correlated. This is hard to answer for Alaska because there are so few stations above their respective valley floors with long periods of record. However, I thought I'd give it a go for Fairbanks-land.

Here's a plot of the difference in monthly mean temperature standardized anomalies (anomalies computed from the NCDC 1981-2010 normals) between Keystone Ridge and Fairbanks Airport (14 miles apart) for entire period of record for Keystone Ridge (June 1996 to present). This is not an ideal test as Keystone Ridge is only 1200' higher elevation than the Fairbanks Airport. However, data for both sites are complete and there is no differing time of observations to confound the question. The way this plot is constructed, positive values indicate the higher elevation station is warmer than expected compared to the valley, and vice versa. In winter, this is straightforwardly interpretable as variations in mean monthly inversion strength. In summer, the situation is more complex but certainly differences in the number of rainy days will effect the differences in anomalies. 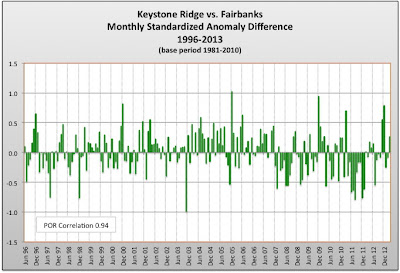 The overall correlation between monthly temperature anomalies at the valley and higher elevation site is an very impressive 0.94. Looking at individuals months, May and October have correlations of 0.99, while December has the lowest correlation at 0.88. In the above plot there are some interesting outliers. The largest negative anomaly is November 2003. This was a wet and cloudy month, with only minimal inversions most of the time. The largest positive anomaly is December 2005, with exceptionally strong inversions (and hardly any precipitation) prevailed the second half of the month. Just eyballing the plot, there may be some longer term signal. Since late 2007 there have been a (seemingly) large number of months with negative differences, while 2004 and 2005 had a large number of months with positive differences.


Variations in daily anomalies are greater, as the plot below since 2011 shows, I've presented a slightly different view in this case, with the actual Fairbanks Airport daily anomalies in green and the Keystone Ridge difference in red. Again, positive values indicate that Keystone Ridge is warmer than expected compared to the valley, and vice versa. 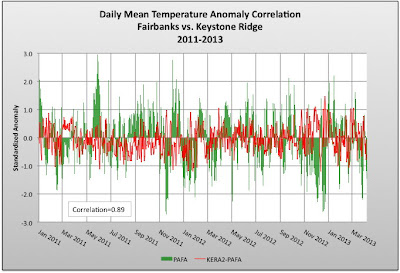 Note: it would be better to use the anomalies calculated from  means and standard deviations for the overlapping period of record (again, June 1996 to present), but it turns out that the difference from using the 1981-2010 normals is, in this case, negligible, and since I otherwise use the current NCDC normals for calculating standardized anomalies, I chose in this case to remain consistent.
Posted by Rick at 2:45 PM 2 comments: 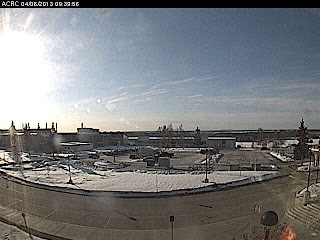 Fairbanks-land awoke Saturday to the coolest weather this late in the season in several years. A decent pressure gradient across the Interior kept winds blowing in some valley locations overnight, but where winds dropped off temperatures dipped well into the teens below. But hey, with more than 14 hours of sunshine to enjoy, I'm not complaining. 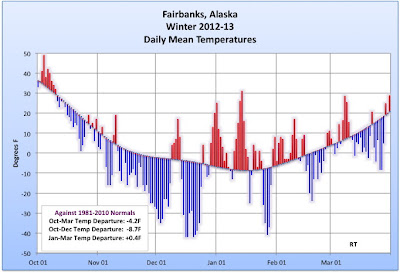 To mind my the highlight of the season was the dreaded ran January 14th. There are still stretches of Murphy Dome Road that are ice covered from this rain (though that is now improving rapidly).
Posted by Rick at 6:52 PM 1 comment: