In light of recent posts on winter rain in Bethel and elsewhere, I thought it would be worthwhile to see what the new ERA5 reanalysis data has to say about winter precipitation type in Alaska.  I've mentioned the ERA5 data on previous occasions, for example here:

The ERA5 dataset includes a precipitation type indicator, which makes it a simple task to assess the frequency of each category across the 0.25-degree latitude/longitude grid.  The six categories are: Snow, Wet Snow, Rain/Snow Mix, Rain, Freezing Rain, and Ice Pellets; the determination is based on the modeled surface temperature and the temperature profile aloft.  Here is some more information on the model algorithm:

Based on the hourly ERA5 data for 40 winters since 1979-1980, I simply added up the number of occurrences of each category of precipitation type for the months of November through March.  Below are maps for the four simple categories, i.e. snow, rain, and in-between.  Note that a precipitation type is assigned whenever the model has a non-zero precipitation rate, no matter how small; so for example the model indicates snow falling more than 90% of the time over the Arctic waters, but rates would be extremely low much of the time.  Click to enlarge the maps. 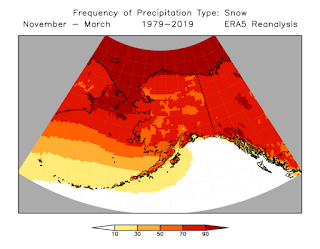 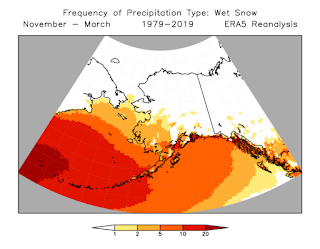 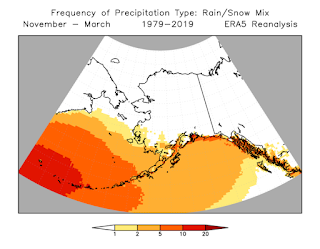 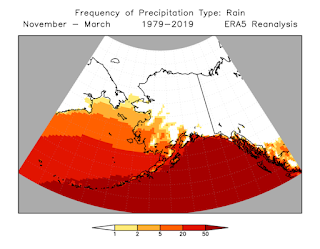 Here are the two other categories, freezing rain and ice pellets, with a different scale to reveal areas of low frequency.  For reference, a frequency of 1% corresponds to 36 hours per winter. 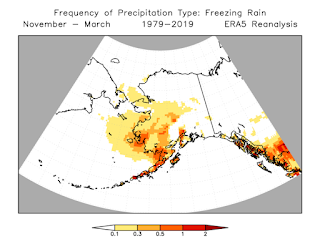 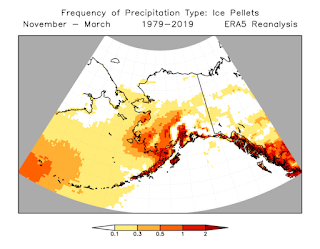 And here are the rain, rain/snow mix, and "wet snow" maps on the same "zoomed in" color scale: 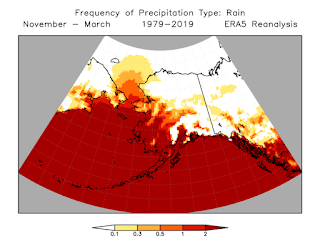 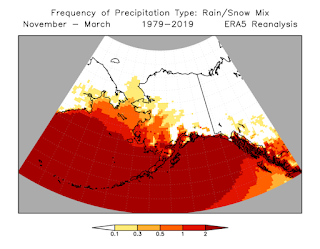 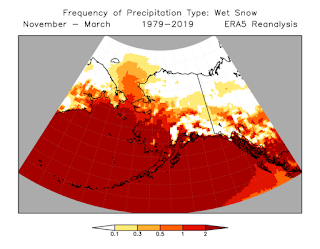 It's interesting to see relatively high frequencies extending around the north side of the Alaska Range to the middle Tanana River valley (e.g. Nenana and Fairbanks); the spatial distribution looks realistic to me, although the absolute values of the frequencies might be biased high or low (more on that in another post).

Finally, here's the sum of frequencies for everything other than dry snow.  I'd be interested to hear readers' perceptions of these results - feel free to leave a comment below. 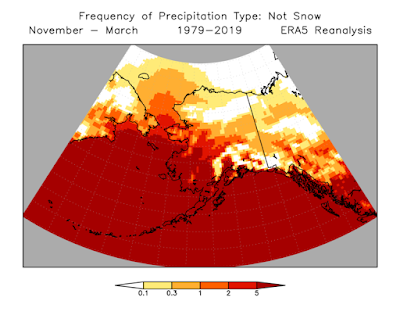 Posted by Richard James at 9:22 AM No comments:

Arctic waters in the Chukchi Sea, northwest of Alaska, have finally begun to succumb to the seasonal chill, with Chukchi sea ice extent approximately tripling in just the last 10 days, according to NSIDC daily data.  As of Saturday the basin-wide extent is no longer the lowest on record for the date, as 2019 is now slightly ahead of 2017.  However, with a powerful storm currently moving up the west side of the Bering Sea, and strong southerly winds pushing up into the Arctic ahead of the storm, the situation looks tenuous. 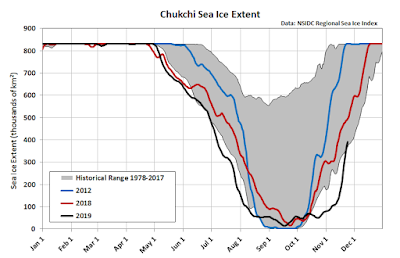 The two maps below show the sea ice analyses from two weeks ago and from today, courtesy of the NWS.  Interestingly the Bering Sea is doing a bit better than in recent years (with some ice along the Alaskan west coast), although it is still behind the 1981-2010 median for the date.  And of course essentially the entire open area to the north of the Bering Strait is anomalous in comparison to that earlier climate normal. 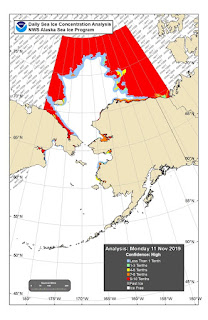 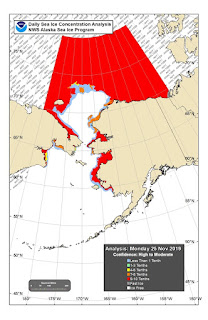 Posted by Richard James at 6:39 PM No comments:

After a nasty ice storm a couple of weeks ago, Bethel experienced blizzard conditions today, with temperatures below 10°F and 40+mph wind gusts combined with heavy snow this morning.  However, as the warm front approached this afternoon, warm air aloft caused the snow to change over to a brief period of freezing rain again before precipitation ended.

The (nominally) 3pm balloon sounding from Bethel shows the dramatic temperature gradient just above the surface.

At the time the balloon was launched (2pm), the surface air temperature was 16°F, but freezing rain was already occurring as there was enough warm air upstream to melt falling snow; the sounding profile shows the temperature just nudging above freezing at 400m above sea level.  Notice the veering (clockwise directional change) of the wind with height, indicative of the rapid approach of warm air.

As of 6pm this evening, the temperature is up to 36°F, and the wind has gone around to the southeast; it must feel positively tropical compared to the conditions only 8 hours earlier.  Check out the temperature gradient and wind shift across the Y-K delta region in the 6pm surface data (click to enlarge): 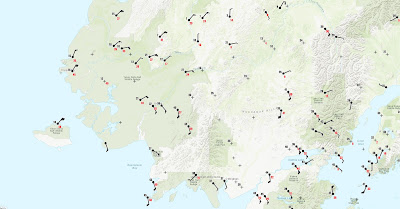 Here's the 3am surface analysis, courtesy of Environment Canada; note the strong pressure gradient over southwestern Alaska, with a cold high to the north (-28°F at Galena this morning, -26°F at Kaltag). 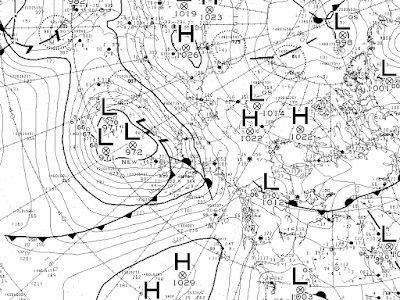 In light of the ice storm earlier in the month (see my earlier post), I took a quick look at the historical frequency of liquid precipitation (rain or drizzle) in winter at Bethel and a few other sites.  The chart below shows the annual percentage of winter (November-March) hourly observations that reported rain or drizzle, regardless of temperature, in Bethel.  Note that I've excluded supplementary observations that were not taken at the top of the hour. 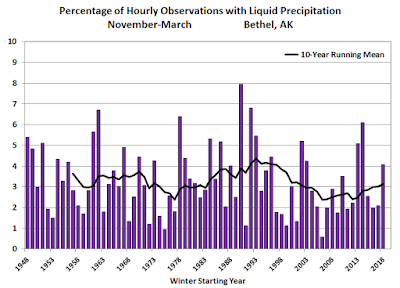 I'd be surprised if there are not some systematic biases between the pre-ASOS era (pre-1998) and the modern era, so I think about all we can say is that there's no evidence of an increase in the frequency of winter rain in Bethel.  The frequency has been relatively high in the past decade, but it seems to have been high also in the 1980s and in many previous years.

Here's the same chart for McGrath and Fairbanks, with the same vertical scale to emphasize the drastic difference in climatological frequency of liquid precip in winter.  If the trends are reliable, McGrath seems to have seen a rather steady decline in frequency, whereas Fairbanks has seen an upward trend in the last 20-30 years (but perhaps not exceeding the levels of earlier decades). 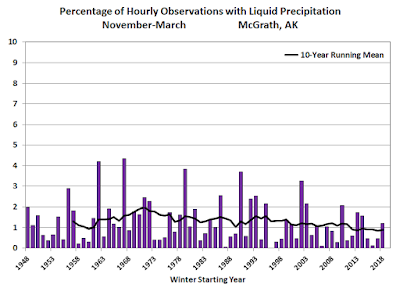 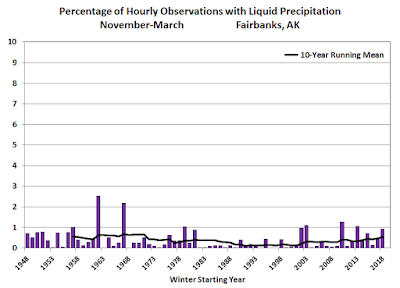 For completeness, I include the chart for Anchorage below, which also shows nothing particularly exceptional.  However, the second chart below shows the frequency of liquid precipitation at sub-freezing temperatures, i.e. freezing rain or freezing drizzle, and this does seem to show a decline since the 1980s (the 2013-2014 spike notwithstanding).  It seems possible that the warming trend in the more maritime zone of south-central Alaska has tended to produce more plain rain at the expense of freezing rain in winter. 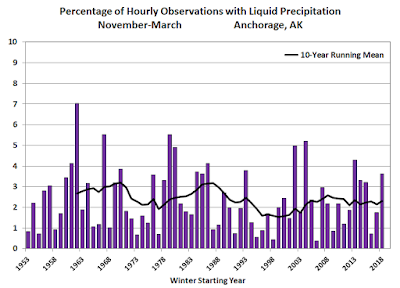 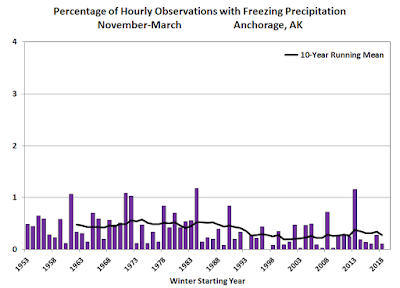 Posted by Richard James at 6:36 PM No comments: 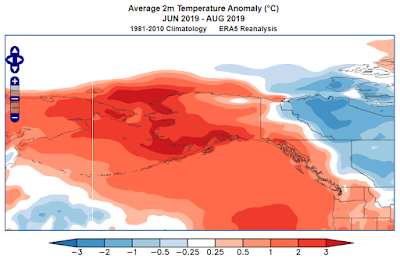 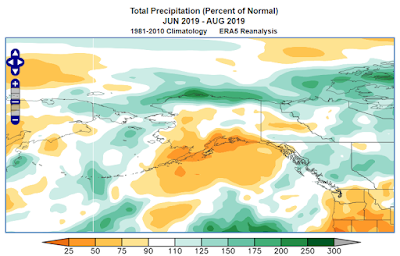 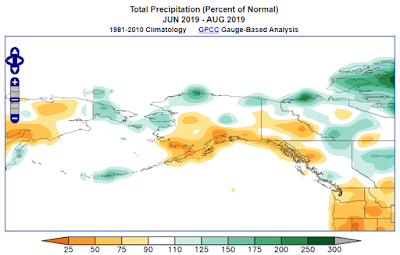 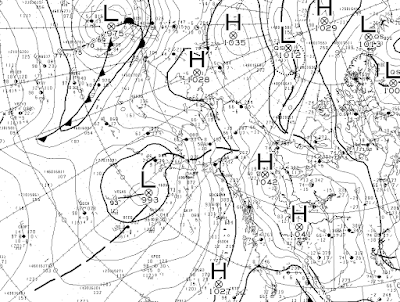