Rain in the Fairbanks area started Friday afternoon, and by early Monday morning most places hard received a good soaking.

This goes a long ways toward wiping out the August rainfall deficit.
Posted by Rick at 5:17 PM No comments: 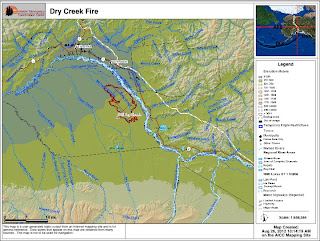 The Dry Creek fire was started by lightning June 23, but remained an inactive, insignificant fire (less than 500 acres) until mid-August. A stretch of warm weather, and a couple of days of brisk south wind, compounded with hardly any rain since late July, allowed the fire to spring to life and grow rapidly. As of Friday, August 24th, the Alaska Fire Service mapped the fire at just under 42,000 acres (map at right), making this the second largest fire of season in Alaska (the Uvgoon Creek fire in the Noatak valley was over 48,000 acres). Just to the southwest of Eielson AFB, the fire has burned right to banks of the Tanana. Happily, the Tanana here is wide and braided. On the negative side, the fire is perfectly placed to provide bouts of smoke for Fairbanks-land until the snow flies: any wind direction except northeast will push into some part of the area. The fire has received only small amounts of rain over the weekend, and while more will fall through Monday, the rain will be not be anywhere near enough to put out this fire. Warm, dry and  intermittently breezy weather is likely again by mid-week, which will undo what wetting has occurred.

Never in recent memory has a single fire sprung to life in mid-August and grown to account for so much of the total acreage burned in the state: the Dry Creek fire on August 11th accounted for less than 0.1% of the statewide acreage burned: as of Friday, it made up almost 17% of the 250,400 acres burned so far, and this will likely increase as there are no other active fires in the state (and have not been since late July).
Posted by Rick at 10:37 AM No comments:

Why So Warm on the North Slope?

Long time reader Trung asked why it has been so warm on the North Slope this summer. The obvious answer would be that the record low sea ice coverage, but that in fact is probably only a small part of the answer. Ice has actually been more persistent in the Chukchi and far western Beaufort Sea than it has been in a few years, though what's left is rapidly melting now. More important has been the persistent trough aloft centered along about 170W longitude, the same feature responsible for the copious rains over much of western Alaska and the quasi-drought in the Interior. This can be seen in graphic to the right, which shows the mean wind direction (arrows) and speeds (color) at 700 mb (about 3000 meters above the ground) for July 1 through August 20 (speed units are meters per second). South winds blowing across the Brooks Range warm and dry as they descend onto the northern plain in a classic "chinook" effect. Barrow has had 15 days with a daily high temperature above 60F, which ties with 1989 and 1936 for the most such days. It is possible that  a new record could be set in the next ten days or so.
Posted by Rick at 6:33 PM 2 comments:

Clear skies and a cool airmass allowed for a more widespread a frost and freeze in the Fairbanks area than has hitherto been the case, though most of urban Fairbanks and hillside areas escaped.

Here's a nice view from the top of Ester Dome about 6am Wednesday morning, with some thin ground fog on the flats: 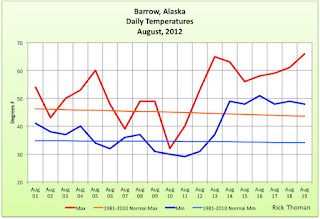 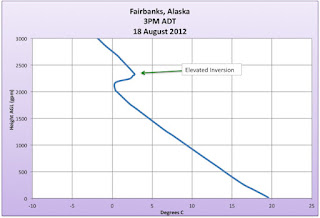 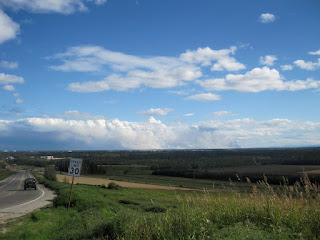 Beautiful sunrise on Denali this morning as seen from Eielson Visitors Center. Low temp at the VC this AM was 41F.
Posted by Rick at 9:53 AM No comments:

Daily solar heating is decreasing rapidly now, and the effects of less daytime heating and longer nights are showing: it's almost getting (briefly) dark now. This is being accentuated by high pressure aloft, which is keeping skies mostly clear over the Interior: below is the 500mb analysis for 4am ADT Friday from Environment Canada, showing the elongated high centered about at 63N. 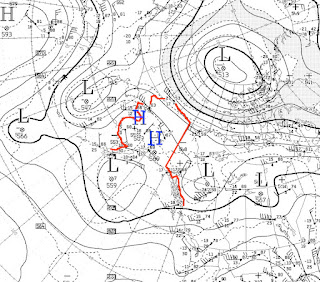 Alaska DOT reported four inches of new snow on the Dalton Highway on top of Atigun Pass (4700' MSL). The SNOTEL at the top of the pass reported a couple inches of snow on the snow pillow for a few hours Tuesday morning.. The 9am Tuesday webcam photo from Chandalar DOT looking northeast shows snow far down the shoulders of the mountains.
Posted by Rick at 8:38 PM 3 comments:

A remarkably deep storm for the high Arctic brushed Alaska's North Slope Sunday and early Monday. To the right is the Monday 4am ADT (Aug 06 1200 UTC) analysis from Environment Canada, with a minimum sea level pressure of 964mb. Part of the reason for the extraordinarily low pressure was that very warm, moist air from Siberia, yes Siberia, was feed into the system as it developed over the East Siberian Sea on Saturday. The storm was too far north to do much for sea ice transport close to Alaska.
Posted by Rick at 11:15 AM No comments:

No Ice in Barrow

Winds have gone southwest at Barrow but as of Saturday morning ice has not made back to shore. The 4am ADT analysis from Environment Canada shows that the strongest west winds are far north of Barrow.

Here's the UAF Sea Ice Group webcam photo from Barrow Thursday afternoon. In this limited view, I can't see any sea ice. A storm will be passing by to the north of Barrow Friday, which will bring winds around to the west, It will be interesting to see if ice reappears.
Posted by Rick at 1:43 PM 1 comment: