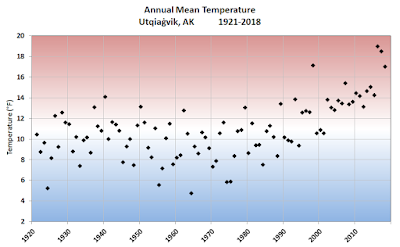 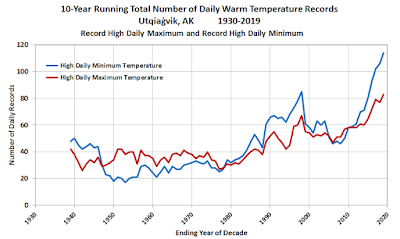 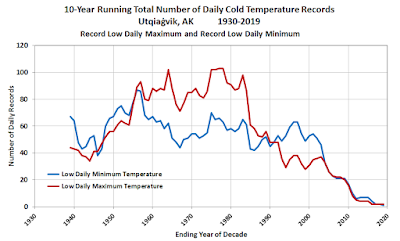 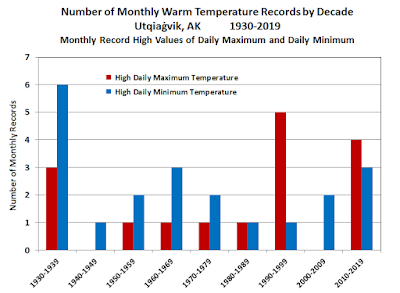 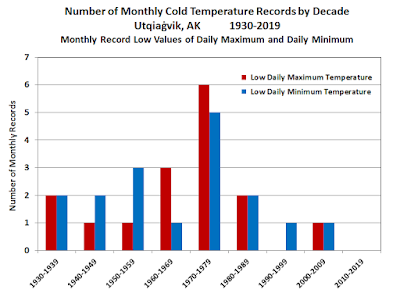 Posted by Richard James at 4:53 AM No comments:

Back in September I posted some brief analysis of soil temperature profiles at one of the Fairbanks monitoring sites run by UAF's Permafrost Laboratory.  Not surprisingly (in view of the remarkable warmth of recent years) the data showed a dramatic warming trend, and so it's of interest to do an update now that another year of data is available.

The charts below are the same as before, but with 2017's annual values appended with the dashed black lines.  2017's mean temperature was slightly lower than 2016 in most of the column, and the annual minimum was lower than for 2016 at each level between about 0.25m and 1.5m depth.  We know why this is: winter 2016-2017 was cooler than the other winters since 2013-14, and March 2017 in particular was unusually cold, so this provided a slight recovery in the condition of the permafrost.

Readers will note that the warming trend apparently continued unabated at the top layers just below the surface, but this appears to be at least partly related to some rather substantial ground subsidence relative to the temperature instrument in recent years.  From 2007 through 2016, the second level below ground was reported as 12cm, but in 2016-17 this changed to 8cm, and in the most recent year (2017-2018) it was reported as only 4cm.  The top-level sensor started at 2.5cm below ground but is apparently now 6cm above ground!  I haven't made the vertical adjustment on the chart, but obviously this could make a rather big difference at the top levels. 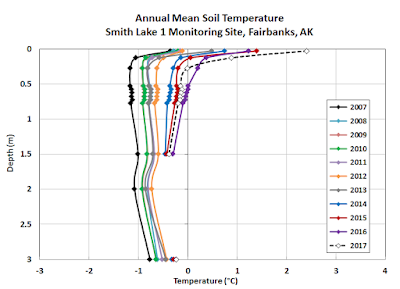 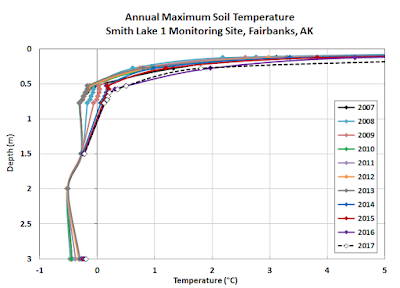 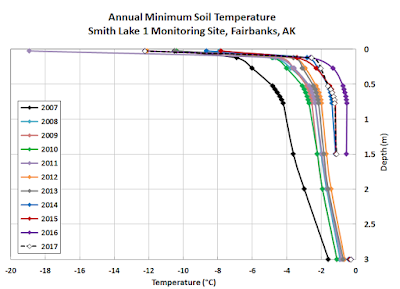 Of course winter 2017-2018 was very warm in Fairbanks (13°F above normal in December), but the unusually deep snow cover probably also contributed to the lack of a subsurface cold wave in late winter; the ground was well insulated from the cold above, and there wasn't much cold to diffuse downward. 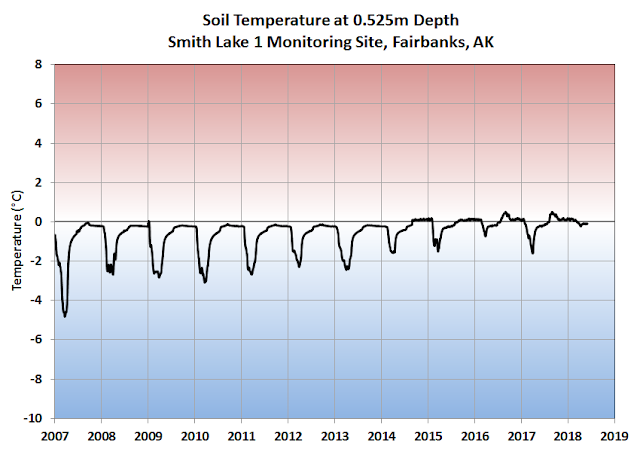 These results are all taken from just one location; what about others?  I did similar analysis with data from two sensors at the Bonanza Creek ecological research site, which is about half way between Fairbanks and Nenana.  At the first sensor, the trends since 2010 are similar to those at Smith Lake, but 2017 produced very similar temperatures to 2016 instead of seeing a small recovery towards colder conditions.  (Note that the sensor depths have trended in the opposite direction at this location, with the top sensor dropping from 7cm in 2010 to 11cm in 2017-18.) 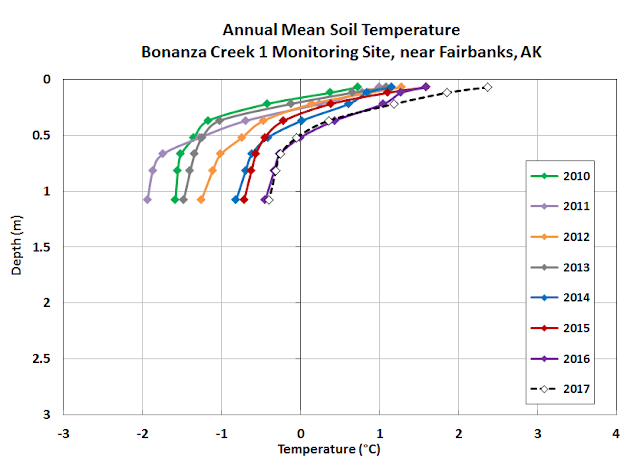 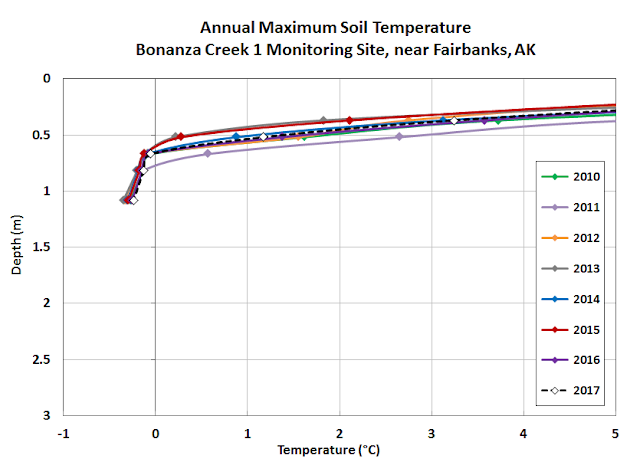 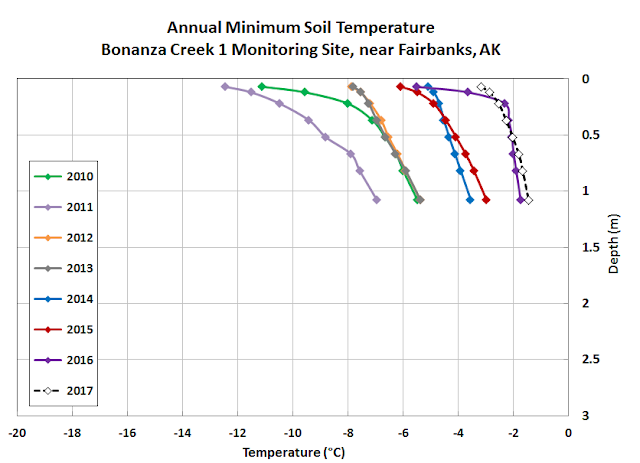 The temperature time series at 52cm depth is quite remarkable when we look at the late winter minima; there has been a stair-step pattern of 2°C increases at two-year intervals (2014, 2016, 2018).  And just like at Smith Lake, the last winter in the series shows no hard freeze at this level about 20 inches below the surface; the winter's minimum was only -0.1°C. 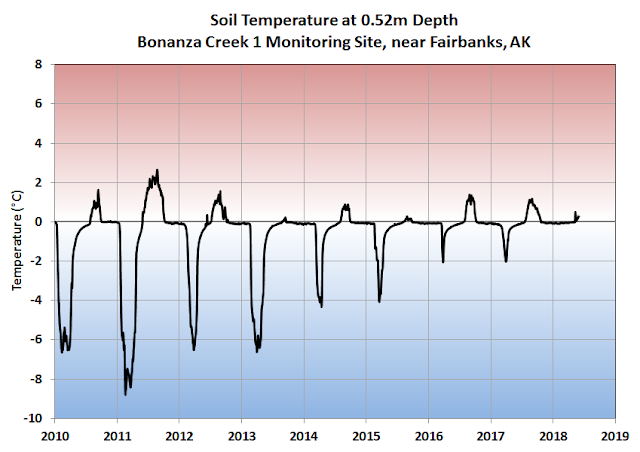 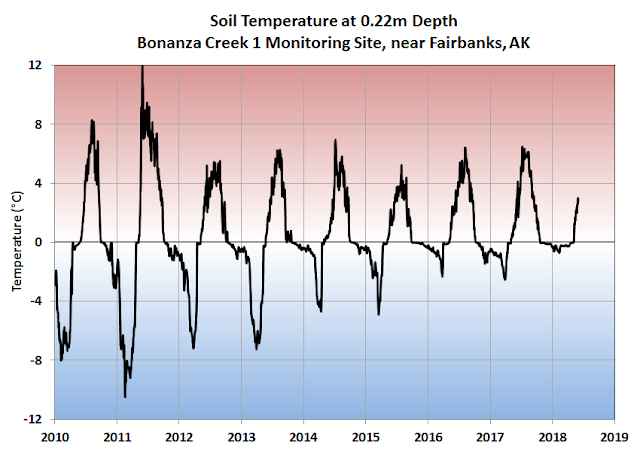 And for comparison, here's a quick look at the same levels from the second permafrost site at Bonanza Creek.  It's essentially the same story, although winter 2015-2016 also saw very minimal re-freeze at the half-meter depth. 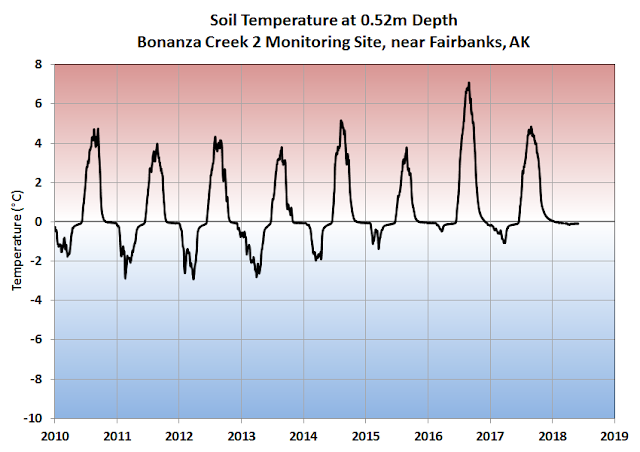 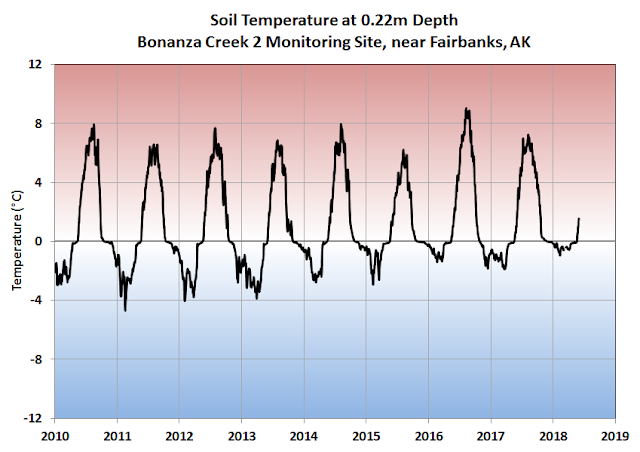 In conclusion, it's striking to see the rapid pace of change at these permafrost sites in interior Alaska.  Not only has warming occurred throughout, and the active layer deepened (i.e. seasonal thaw extends deeper), but we're seeing layers that were formally permafrost now almost fail to refreeze in winter (e.g. 0.5m level at Smith Lake).

In last September's post I said that "Smith Lake #1 may soon see seasonal ice atop permanent thaw", but I wasn't imagining that something like this would appear in the very next year of data.  What will the next annual update reveal? 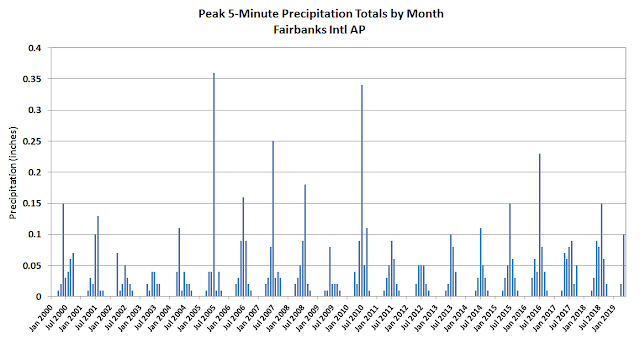 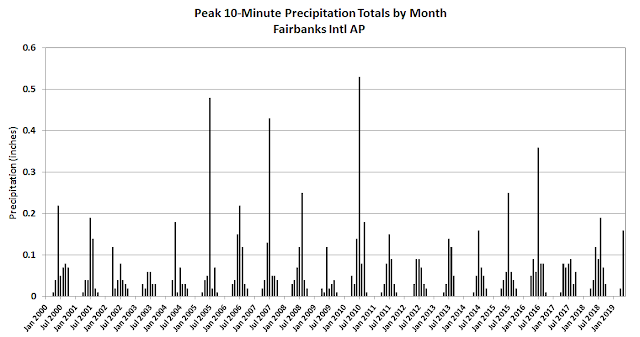 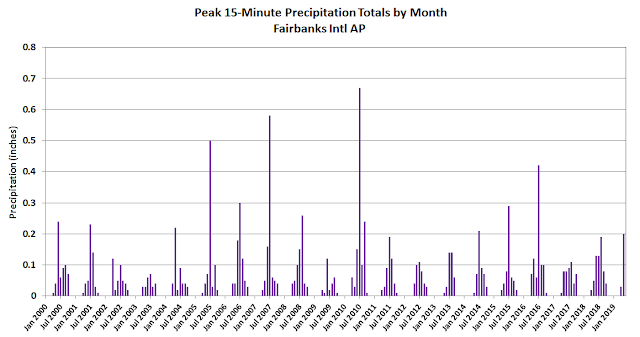 Posted by Richard James at 6:42 PM No comments:

I saw this posted today by the NWS in Fairbanks and thought it was neat:


Overnight thunderstorms developed west of Bettles and have moved south of Allakaket. Here is the scene at the Allakaket airport at 5 am! pic.twitter.com/numYpV3ex4
— NWS Fairbanks (@NWSFairbanks) June 4, 2019

5am AKDT is of course 4am standard time, but Allakaket is more than an hour west of the true time zone center, so the picture was taken before 3am local solar time.  Tomorrow is the last day with a sunset in Allakaket until July 7th. 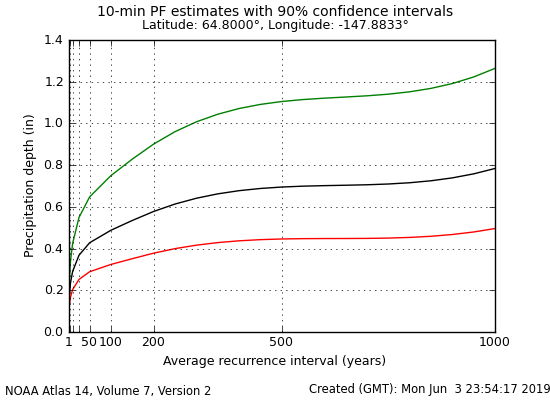 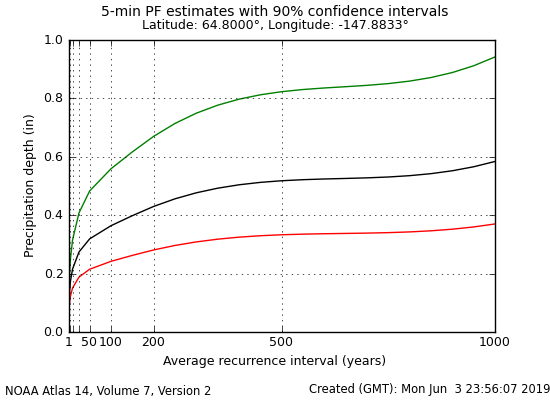 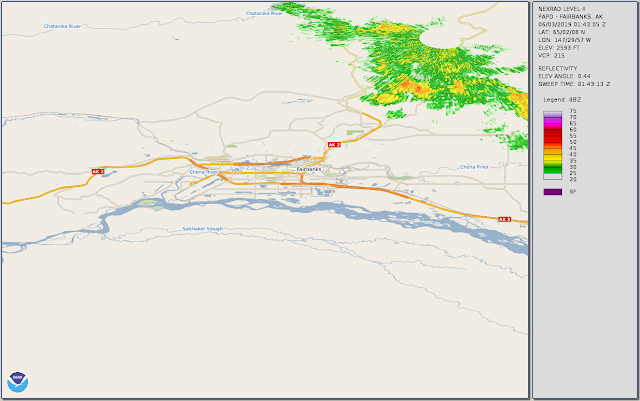 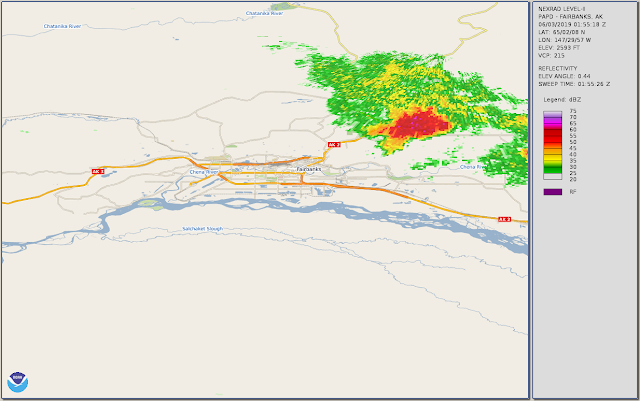 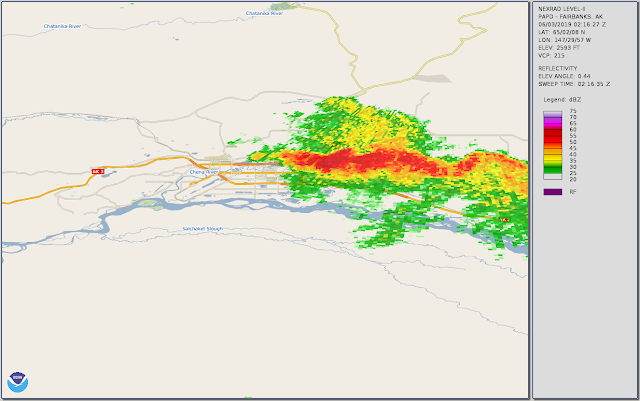 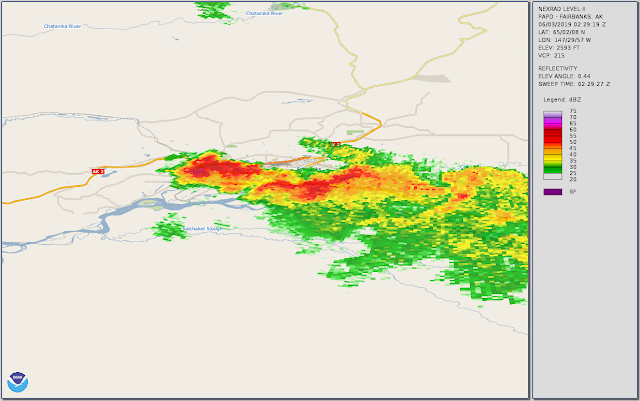 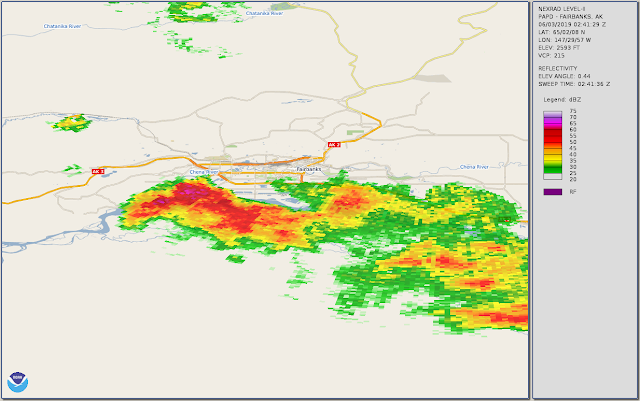 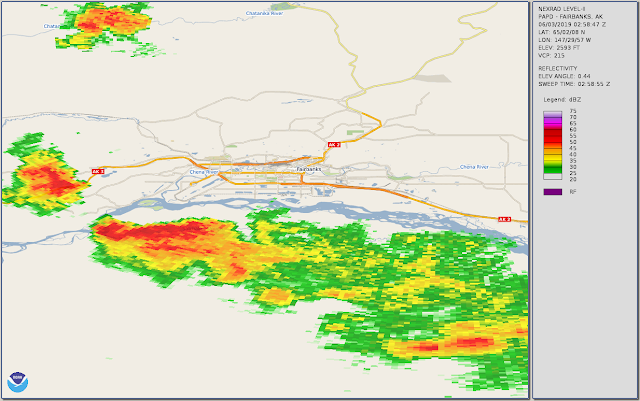