Warmest Week of record in Fairbanks

Updated for new record:
The week ending June 30th is the warmest week of record in Fairbanks. Here are are the top five non-overlapping weeks:

Here's the NCAR/NCEP reanalysis of 500 mb heights since Solstice. It's a classic pattern for hot summer weather in Interior Alaska, with the high centered west of Great Slave Lake and ridge extending west into Alaska. 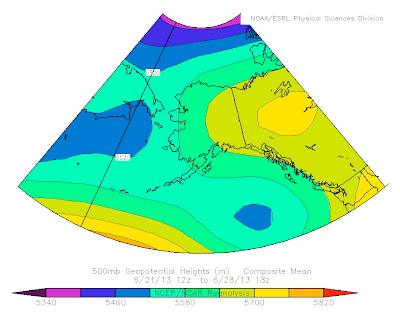 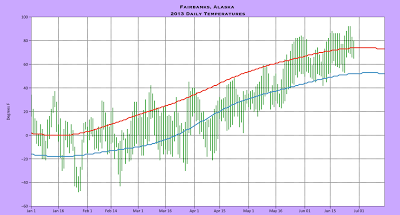 So, the current hot weather is as "anomalous" as the cold weather in the spring, having now exceeded three standard deviations from the 1981-2010 normal, though the duration is not as long (thus far).
Posted by Rick at 9:41 AM No comments:

Warmest Day in the Modern Era in Fairbanks

For the first time in modern history, Fairbanks recorded a low temperature in 70s. The low Tuesday of 70ºF. The only other occurrence of a low in the 70s was on June 26, 1915. There was a thunderstorm that day that produced more than one tenth of an inch of rain, so this observation is, to say the least, questionable.

Near Record Warm Low at Farbanks

The low temperature Monday at the Fairbanks Airport was just 66ºF, thanks to a persistent breeze overnight. This is one of the warmest daily low temperatures of record for Fairbanks. The warmest WB/NWS era daily minimum temperature is 67ºF set in several days in July 1975 and again in June 1991.  The "record" of 76ºF in June 1915 is virtually certain to be in error, as there was a shower that produced more than a tenth of an inch of rain the same day.

Also, I'm back. An eventful couple of weeks I'll try to recap as time allows.

Temperatures soared into the 60s and 70s on the North Slope Thursday. The high of 66ºF at Barrow was one degree from the record high for June 13th. Other  near coastal sites were in the 60s, with Wainwright at 68ºF and Deadhorse at 61ºF. As you would expect, it was even warmer inland. Atqasuk and the Umiat RAWS reported a high of 75ºF and up at Anaktuvuk Pass the high was 72ºF.
Posted by Rick at 4:57 AM 1 comment:

We're enjoying more than 21 and one half hours of sunshine these days, but temperatures in the usual cool spots dipped to near or just below freezing Tuesday morning. Goldstream Creek and Angel Creek near Chena Hot Springs fell to 31ºF, Gilmore Creek and Mile 42 Steese had 33ºF and the Woodsmoke CWOP reported 35ºF.

I'm on the road the next two weeks so posts likely to be limited.
Posted by Rick at 8:35 PM No comments:

Really 1 Below Zero at Anaktuvuk Pass in late June?

Reader Richard asked about the veracity of the low temperature of 1 below reported on Jun 25, 1967 at Anaktuvuk Pass, and he expressed considerable doubt that this could be correct. This would be a state and, says Richard, a national record for June.

Here's the situation: Anaktuvuk is at 68.1N 2100' in the Brooks Range; the village is right on the valley floor and within one mile of the continental divide. On general principles,  it seems to me that it is (barely) within the realm of possibility that IF there was a fresh snow cover and IF an unseasonably cold airmass in place AND skies cleared late evening AND winds were light that Anaktuvuk could get this cold in late June (this would be a lot more believable if it was the first few days of June).

There are historically very few weather observations from this part of the world, and the data quality from the coop observation at Anaktuvuk during this time have more than a few problems.  Here is the scan of the original form for June 1967:

There looks to be no doubt that the value written in was -1, and there is no other evidence on this form that there is some confusion with, say, degrees C. Most of the temperatures during this month look plausible, and while there are different writing implements used, it looks to me that the hand writing is all the same person. That fact that most of the temperatures look okay makes it less likely that observer was reading the wrong end of the min temperature index, which would  make lows about 12ºF too low.

If these are really observations taken at 5pm (and differences from the scheduled time of observation are hardly ever recorded by the observer on the form), the data on the 24th looks suspect: was it really 40F at 5pm on the 23rd, fell to 17F the following morning ( itself a remarkably low temperature for so late in June), then rebounded to 60F, only to be back to 35F by 5pm on the 24th? The high temperature of 44F on the 25th looks plausible.  Notice too the remark concerning snow cover on the morning of the 27th, but nothing that would suggest snow on the ground on the morning of the 25th.

If we look at what was happening on the broader scale, here's the NCEP/NCARR Mean Sea-Level Pressure and 850mb temperature reanalysis for Jun 25, 1967:

This does not help settle the question. There is a surface ridge across the Brooks Range and 850mb are slightly below freezing (on this rather course scale). Now 850mb temperatures a little below zero are hardly unusual over the Brooks Range in mid-summer. Cooler than normal, for sure, but nothing extra special. Also, as Richard pointed out, there is nothing of note at other northern Alaska locations around this date.

It would be nice to have some explanation of how the -1F got to recorded, but I can't think of any offhand. So, lacking any additional evidence, my vote is: beyond reasonable doubt, the low temperature was not  -1F at Anaktuvuk Pass on June 25, 1967. However, there IS a very slight chance that the all the ingredients came together and that the observation of -1F is correct.
Posted by Rick at 7:40 PM 7 comments:

Not Much Thunder Yet


The Alaska Fire Service as had some issues with the lightning detection network (both under and over reporting strikes), but there is no doubt it's been a slow start to the convective season in Interior Alaska. The plot on the right plots strikes May 25th through Saturday morning. Here on Keystone Ridge, there has been no thunder heard to date. Only once in the past 17 years have we gone past June 9th without any thunder: that was in 1998, when there was no thunder heard here until June 28th. Of course, it is not uncommon for Fairbanks airport to not have reported thunder by June 8th. The fire expansion has slowed with the wetter weather this week. The total acreage burned as of Saturday morning stands at just under 46,000 acres. More than 60% of that total is from the Doestock Creek fire south of Aniak.
Posted by Rick at 7:42 AM 3 comments:

The Barrow ice cam was down for a while over the winter, but it's back and seems like to a good idea to post an image as we head into the melt season. It's not the prettiest day in Barrow, but here's the view Tuesday late afternoon. That's all ice out there. 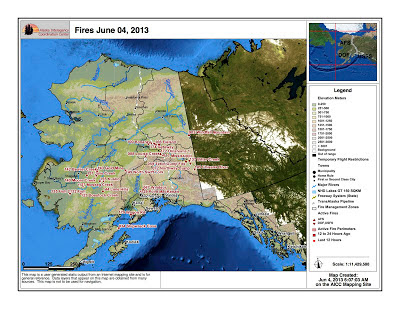 The cold spring greatly retarded the fire season: as of Friday, May 31 only 665 acres had burned. That changed over the weekend, as the season roared to life: Monday morning Alaska Fire Service was calling 32,600 acres burned. Most of that was in Southwest Alaska, where the Doestock Creek fire, south of Aniak, was over 18000 acres. There were several staff fires southeast of Tok, with the Bitter Creek fire threatening to close the Alaska Highway. Here's the AFS plot of "active fires" from Tuesday early morning, bearing in mind that active means "not declared out" and that many of these are 0.1 acres or less. The lack of fires in the northern Interior reflects the lack of lightning thus far this season. 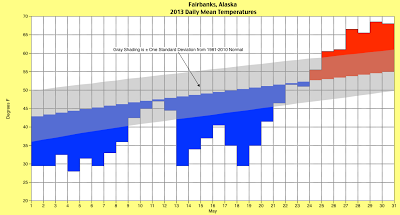