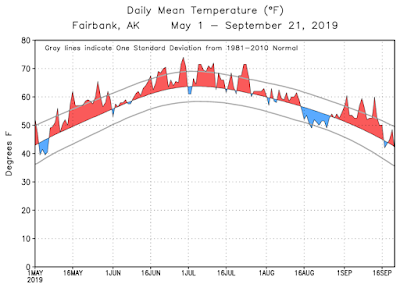 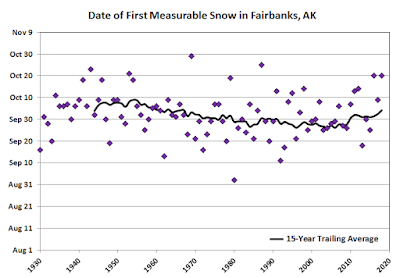 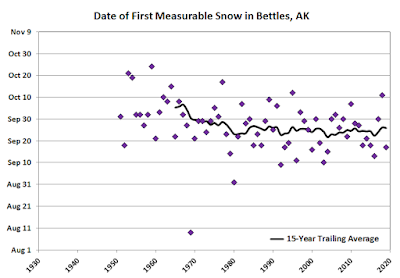 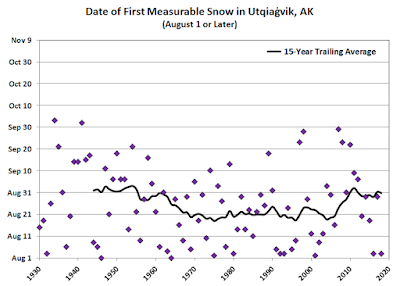 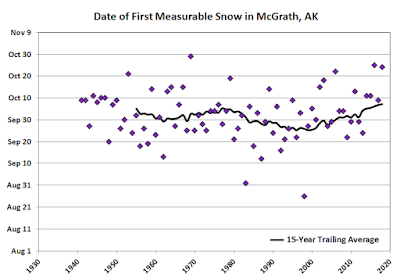 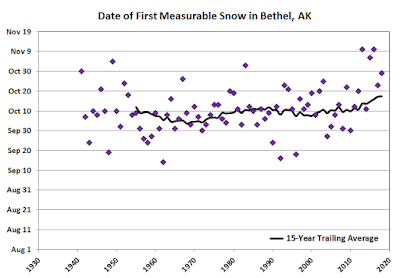 Posted by Richard James at 6:08 PM No comments:

After a hiatus of many months, I've posted an update on the North Pacific "Blob Tracker" blog.  There has been considerable interest recently in the return of the so-called "blob" pattern of warm SSTs in the northeastern North Pacific, so it's worth taking a look at how current conditions compare to the earlier version of the anomaly.

A remarkable spell of early autumn warmth has developed across the North Slope in the past week, with daytime temperatures mostly in the 60s and even up to around 70°F in some spots (e.g. 71°F in Umiat).  As noted by Rick Thoman on his Twitter channel, the 70°F at Deadhorse last Tuesday (September 3rd) was the highest temperature on record for the month of September, with a history back to 1968 if we include the old Prudhoe Bay climate data.  The chart below shows that daily high temperatures have been hovering around record levels since then.  Many years do not exceed 60°F after August in Deadhorse, and in fact this year is only the second year since 2010 to do so. 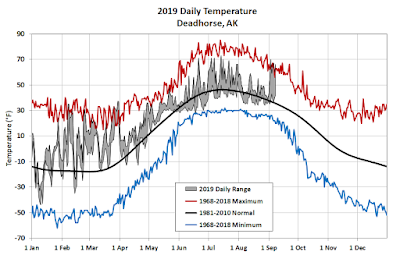 The data from Utqiaġvik (formerly Barrow) paints a similar picture, and here it's remarkable to note that daily low temperatures have been at or above the 1981-2010 normal for daily mean temperature almost constantly since the start of July.  This is a striking effect of exceptionally warm water temperatures and absence of sea ice in the nearby ocean. 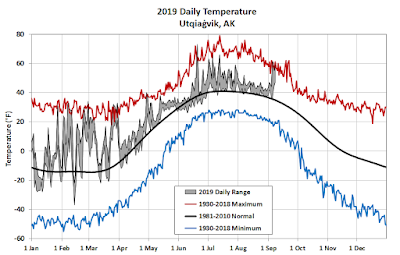 But perhaps just as unusual as the warmth of recent months is the quantity of rain that appears to have fallen on the north side of the Brooks Range.  I don't have a comprehensive assessment of rain amounts, but the NWS has been warning of flooding on North Slope rivers, and the Imnaviat Creek SNOTEL reported nearly 13" of rain for June through August (see below).  The Umiat RAWS instrument, at a much lower elevation, measured 5.9" of rain for the same period, and this is close to a record for the location.

Here's a map of the summer's precipitation in terms of departure from normal, according to the new state-of-the-art ERA5 reanalysis.  It's interesting to see the sharp north-south gradients in precipitation anomaly across the divides of both the Brooks Range and the Alaska Range, and this appears to be realistic even though it's just a model estimate and not obtained directly from ground truth measurements. 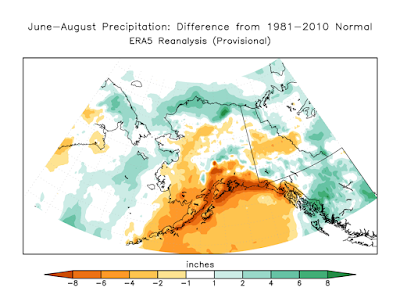 And here's the corresponding temperature anomaly from the model.  The warmth looks a bit less amplified across the north than I would have expected, but I haven't yet had a chance to do a detailed comparison at the major observing sites. 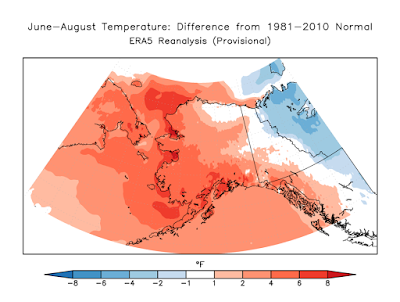